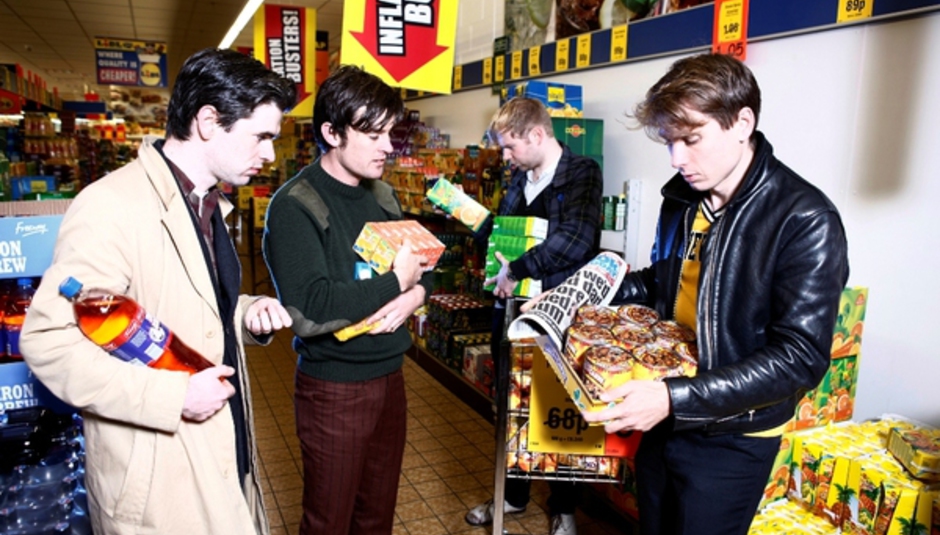 We grabbed a quick chat with Franz Ferdinand's Nick McCarthy to quiz him about the recording of the band's third album Tonight: Franz Ferdinand, due January 26th on Domino. Refer to our previous report for a full tracklisting...

It's taken a while to finish this album. Was working with [Girls Aloud/Sugababes/Kylie producers] Xenomania a waste of time or a useful experiment?

It never really took off to be honest - we only went down there and recorded one song in the end. We thought it'd be great to collaborate with a total 'pop' producer but we realised pretty quickly that it's not our world; we're not really a 'pop' band. But we took some great things away from it, I really enjoyed working with Brian [Higgins, Xenomania producer], he's an amazing guy.

So the way you ended up making the new record was quite different to that?

Yeah. We took our time over it. We wrote a lot of songs over the course of the year and then recorded for about three or four months. That process was quite intense, but also quite playful; we had a lot of time to experiment, whereas it would have been a very strict time schedule [with Xenomania]. We're really interested in the production side of things, and getting sounds we like, but that's secondary to the song, you know? That's why we write all the songs first to make sure they're exactly how we want them, and then go in and arrange them as a band, and then record.

This time you had chance to test the songs out on live audiences [the band embarked on a tour of small venues during recording]. What did you learn from that?

When you're making an album you're in a room for months on end and you don't realise, sometimes, that the things you're playing aren't as good as they should be. As soon as you get out and play them to people, you can see their reaction, but also you have your own reaction; sometimes you're embarrassed and like 'I don't want to play that in front of a crowd!' - that's a really bad sign, obviously. So we'd go back in afterwards and change things depending on the reactions. And playing to those smaller audiences was great, too; I don't want to be writing songs for arenas or something like that, it's a really bad idea. At the end of touring the second album we were doing these really big shows, and still writing songs in soundcheck. Listening back to it now... we just ditched all of it, you're writing things that only sound good in a big arena! I don't really give a shit [if the new songs sound good in arenas], it should just be good music, not written especially for big places. I think that's a terrible idea.

Did some songs lose their place on the record, or earn the right to be on there, as a result of those live experiences?

Yeah. We recorded about 25 songs, and some of them just weren't as good as the others, or we realised they were too similar to the others. Over the course of the year we went through a number of different phases, writing three or four songs in each phase, and this record's like a 'Best Of' from that period.

Every song on the record has been my favourite at some point, but just now it's a song called 'Live Alone', a total disco stomper, but it's got these really grim lyrics to go with it - I like that combination, a really upbeat song but then you listen to the lyrics and it's a bit more serious. 'Send Him Away' is another song I like just now. But I'm really proud of the whole album, there's no filler on there and that was really important to us.

I remember reading a while ago that you were pursuing an African direction...

I'm not actually sure where the African thing came from. The album's not like that, anyway! I think it was because we played an African Express gig in Liverpool and someone got the idea from that that we'd be doing a load of African music. There's a couple of songs, one for sure, that's got an Afro-Carribean, 6/8 feel to it... we've listened to a lot of African music and taken some things from it, but it's not an African record. We're from Glasgow, you know?!

You mentioned a "disco stomper" earlier, is this the danciest Franz album yet?

We definitely wanted to make a dancefloor record, and I think it is. It's actually a little bit slower than the other two, a bit groovier. You can swing your hips a bit better to it. The others I find a bit more frantic, in a good way, whereas this one's a bit cooler.

All of the songs seem to be about going out, was that a deliberate decision? It's not a concept album, is it?

The album's about a whole night out, yeah. The first song's the getting ready, then you go off and go out to a bar, then on to a club, and then it's the walk home at 5am before going to sleep when the sun comes up. That's what the album is. But it's not a concept record, we only realised the songs are all about night time once we'd finished them - so don't worry!