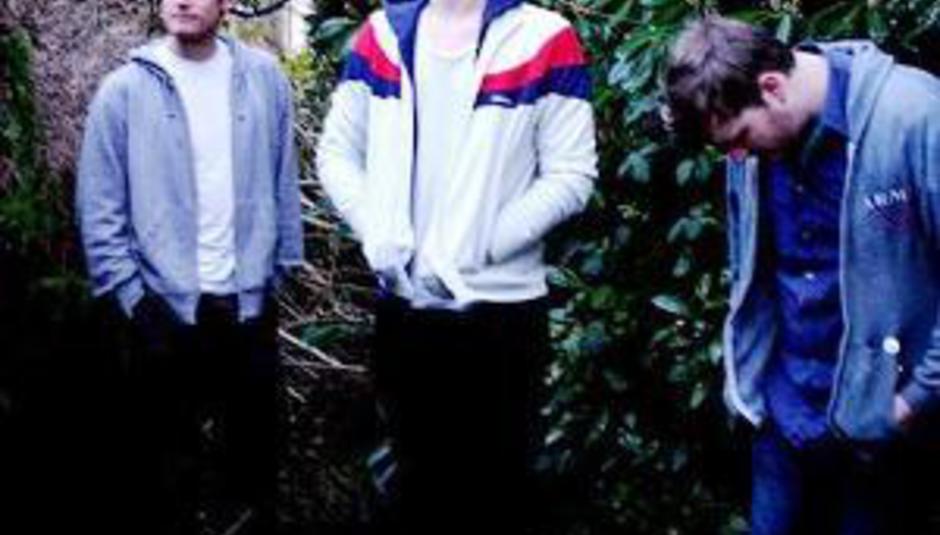 A five-pack of recent favourite DiScoveries for you, readers, to let sink into your ear holes. Check them, rate them, comment on them, give us your tips – DiScover stalls without its fires getting a good stoking once in a while. Calories
From ashes, rise… three-quarters of the lamented Distophia – find their debut Soda Lake reviewed here – get their act together for some truly stirring indie-rock that’s got plenty in common with the straighter-faced bands on Dischord’s roster, with plenty of gang vocal sing-along parts and hooks large enough to hang a Great White on. John Biggs, Pete Dixon and Tom Whitfield craft the sort of rock that seems so very simple and effortless on first inspection, but a few times around its evident that this takes skill, technique and years of practise. Or, dumb luck. Whatever’s gone into the two tracks on the band’s MySpace – ‘A Bear A Bison’ and ‘To Encounter A Deer’ – we’re looking forward to the trio sucking more of it up inside themselves and delivering further gems for DiS to dance a quickstep to. Calories could well replace JoFo as our favourite Brummie band of 2008 at the rate they’re going.
MySpace Narrows
Narrows are something of a cross-Atlantic hardcore supergroup... sort of... their line-up including members former and present of These Arms Are Snakes, Botch, Bullet Union, Tropics, Quarantine, Unbroken and Some Girls. It’s Botch they echo the loudest though, due to the vocal contributions of Dave Verellen – anyone who’s truly missing the Tacoma titans, responsible for one of the most influential hardcore records of all time in the shape of We Are The Romans (re-issue reviewed) and has as-yet been unsatisfied with the output of break-aways These Arms Are Snakes and Minus The Bear is encouraged to seek out Narrows’ MySpace ASAP and let ‘Life Vests Float, Kids Don’t’ into their lives. With Verellen up front, it’s like 1999 all over again, in a great way. Disappointment, unlikely.
MySpace Thought Forms
A DiScovery made via a conversation with Portishead’s Geoff Barrow, whose Invada label is to release the first album by the band (read the label profile here), Thought Forms are a fresh-of-face trio from the British southwest making the sort of instrumental racket that got hairs on end when Young Team crossed the border at the back end of the last century. This is post-rock, but not as you’ve known it for a while (unless you’re a real connoisseur, we guess) – savage of riff, menacing of atmosphere, detailed of design. Haunting, seemingly formless vocals drift atop waves of hypnotic guitars, pedals are depressed with force and the structures crumble, dust where once there were walls, stars where once the sky rested blacker than coal; it’s like Cocteau Twins meeting This Will Destroy You in the clouds over the Atlantic. Blissful, and just occasionally terrifying.
MySpace Brontide
We’ve not a great deal to go on, on a MySpace front, but reports from this trio’s live shows so far are almost universally positive. Featuring former I Was A Cub Scout drummer Will Bowerman cutting the hell loose at his kit, these complex-of-composition newcomers also count a fellow from the band Pictures amongst their number. It’s mathy in a manner immediately comparable to Battles, but not quite as headache-inducing of squiggly vocal – there aren’t any, you see. Maybe we’re more in Russian Circles waters, then – a fan of the Chicago band, it seems natural for Bowerman to follow his synthy emo project with one perhaps closer to his most current tastes. Their own mission statement: “We plan on paying the most melodic music we have ever played, in the same song as playing the heaviest music that we have ever played.” Told.
MySpace
See Brontide live at the next London DiScover Club, August 30; details Rustie / Hudson Mohawke
Sat in the satisfying mist between the humble sounds of dubstep’s subterranean ebb and flow and unravelled hip-hop space loops, Glaswegian tykes Rustie and Hudson Mohawke (pictured) have been cooking up a broth of brow-beaten beats and pining R&B. It might seem crass to twin the pair together so, but after both releasing through Wireblock and Stuffrecords (with Rustie’s Jagz The Smack EP (three reprints) and LuckyMe partner Hudson’s recent reworking of Tweet’s ‘Ooops! particular standouts) the pair ended up signed to the Warp payroll. Holding hands in some respects but greatly removed in their tunes, Mohawke takes pop nuggets and turns them inside out to form panic-stricken blows, whereas Rustie strikes up the same broken-capped hip-hop as Flying Lotus offered up on Los Angeles and its sister EPs, but with a crunking Neptunes vigour and the cacophonous snatch of UKG (check his recent appropriation of Zomby’s ‘Spliff Dub’ for further confirmation). This pair may be lurking in the backstreets but they’re making beats to fill floors. SS
MySpaces: Hudson Mohawke / Rustie