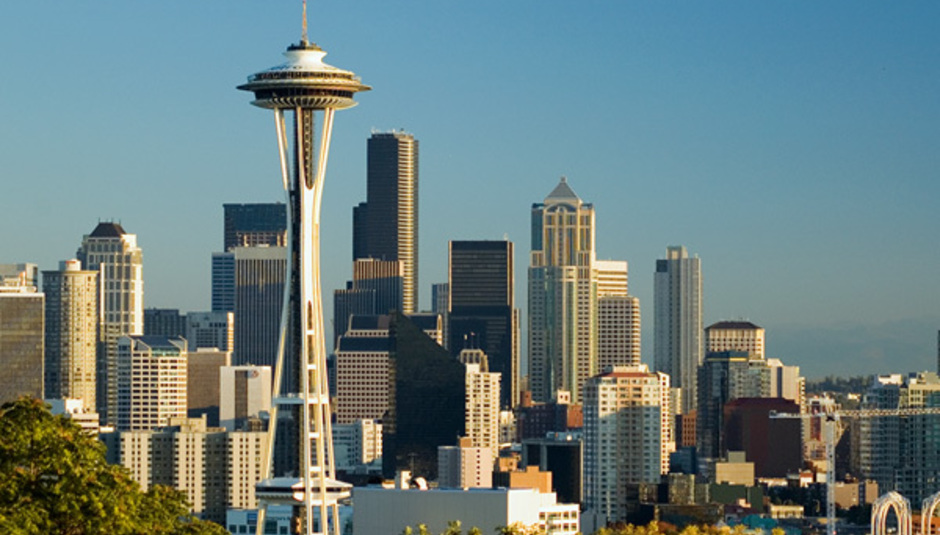 And so it’s time for another installment of the infamous MySpace Trail - where trigger-happy fingers get down. You remember the rules - following on from our last installment #5 - we DiScover new bands blindly via the starting point of one fairly established band, with only Top 8's for guidance.

And so, it's to a city steeped in rich musical history we begin (and ultimately stay): Seattle, Washington, USA. With the legendary record label Sub Pop having just turned 20 years old and certainly, from a wider national and international prospective, holders of the key to this musical city, some of their local signings – such as Band of Horses and Fleet Foxes – are currently running riot across Europe. This city’s small but perfectly formed scene is an incestuous ball of good times, where bands are not rivals but allies, often all sharing practice spaces and regularly gigging on the same bills. So, unsurprisingly this friendship carries over to the virtual world of MySpace. And so to it, where we begin with the aforementioned and recent top 10 UK chart inhabitants Fleet Foxes. Having claimed that early on in their existence Fleet Foxes were shunned by their local scene, the act now emerge victorious as current talk of the town. These local boys done good, who picked up a deal with Sub Pop on the way, currently have all the broadsheets and even tabloids across the pond praising their recent self-titled debut album, and ripping a hole in their pants in order to violently evacuate such cumbersome sound bytes as “a landmark in American music”, “a bewitching, unfathomable musical spell” and, simply, “a classic”. Fleet Foxes currently find themselves following in Band of Horses’ footsteps as the second ‘new’ Seattle band to play two sold-out nights at London’s Shepherds Bush Empire this year.

Play: ‘Blue Ridge Mountains’ begins with sparse multi-part baroque harmonies drowning in reverb before cutting through to acoustic rock (well as rock as the band get) accompanied by mandolin and singer Robin Pecknold asserting “I love you, I love you, oh brother of mine…”. Such a nice man. This Sub Pop label mate of Fleet Foxes, 24 year-old Seattleite Jesy Fortino whom writes and records under the moniker Tiny Vipers, distances herself from the confessional singer/songwriter idiom and instead opts for a eerie folk sound that incorporates sparse soundscapes draped in mysterious dark hues. Fortino often sounds as if Joanna Newsom would if she rid her mind of fantasyland and traded in her harp for an acoustic guitar. The Tiny Vipers sound would serve as a perfect soundtrack to being lost in the woods, and succinctly showcases the fresh take on a tried and tested sound the city’s young artists are currently producing.

Play: The sparse and simple ‘On This Side’ with subtle piano accompaniment contains strange and poetic adventure in abundance - “Slow down, there’s easier ways, else stay behind with us” implores Fortino “We’re just dishes in the dining room, that no one is to touch”. Time stands still as she eeks the song out for over 5 and a half minutes but as it finishes there is only one thing to do – hit replay.


Video: Tiny Vipers 'On This Side' Triumph of Lethargy… are THE current Seattle ‘supergroup’ plastered across the lips of every Seattle-dwelling muso. Containing no less than three big hitters of the scene this experimental noise-rock band counts ex-Murder City Devils (RIP) Spencer Moody and Dann Gallucci as well as Pretty Girls Make Graves singer Andrea Zollo (who plays percussion within this set-up) as members. The bands explosive live shows are their specialty (occasionally playing until the bloody end), Triumph of Lethargy… are so well connected within the city they appear in all bar a couple of this trail’s artist Top Friends. We’d say keep an ear out for the name but it’d be difficult not to notice.

Play: ‘Ballard Of Dirty Bill’ is a droning mound of tub-thumping experimental noise-rock which contains howls and wolf calls atop a rotating blues riff and mound of electric organs and blow keyboard. It’s just one click before we discover what another fellow ex-Murder City Devils and Pretty Girls Make Graves member is currently up to, this time in the form of bass player Derek Fudesco. A major departure from his previous distorted art-punk past with Fudesco now playing humble nylon-string guitar, has paired up with the nasal tenor of former Hint vocalist Pete Quirk. The Cave Singers sparse sound incorporates traditional organic folk instruments such as shakers and washboards and is currently among the cream of this newer folk sound (also resided by acts such as Tiny Vipers) emanating from the city.

Play: ‘Seeds Of Night’ provides a relaxed and early summer evening introduction to the band which succinctly encapsulates each element of their sound. In his optimistic refrain Quirk sings “Ohh thinking of heaven / ohh thinking it’s nice” as the track breaks down midway into something a little more freeform before returning to invite a fanfare of subtle brass to close.


Video: The Cave Singers 'Dancing On Our Graves' Talking of local Seattle big-hitters – late last year, after ten years as a band, post-hardcore screamos The Blood Brothers decided to called it a day. But long before the ashes had time to settle, Past Lives containing 3 of the 5 Blood Brothers broke out of their Belltown rehearsal space and played their first show at Triumph of Lethargy… frontman Spencer Moody’s Seattle antique/junk shop The Anne Bonny. The result is a churning punk sound with plenty of stomp, thrash and artful-groove. Any Blood Brothers fan will be left salivating and the band are already playing with bands such as Liars and No Age. Whilst in a similar vein to fellow newcomers Jaguar Love their sound is a little less “aggro-pop” and a little more straight-up frenetic. A 5-track EP entitled Strange Symmetry has just been released and can be heard on the bands MySpace page.

Play: ‘Reverse The Curse’ packs into two and a half short minutes all you could hope from 3 ex-Blood Brothers. Sheeny electronica makes way from tinny shredding guitar lines and frantic drums which build for vocalist Jordan Blilie to treat us to a bout of larynx ripping scream before repeating “Oh well what can you do…”. It rocks - hard! Drumming for Past Lives is clearly not keeping Mark Gajadhar, former drummer of The Blood Brothers busy enough. So in addition to this he has recently started writing and performing under the pseudonym DJ Gajamagic, teaming up with local MC Pearl Dragon in order to depart completely from his previous guitar-based efforts and into the genre of hip-hop. Enter Champagne Champagne. Gajamagic supplies abundant beats, often supplementing them with live synth, melodica, percussion, scratching, and vocals – as MC Pearl Dragon delivers staunch ’80s references and punchlines with comedic timing and flow. As with any self-respecting hip-hop outfit completing the line-up is hypeman Thomas Grey.

Play: ‘Soda and Pop Rocks’ - its mind-fuzzing synthesized sub-bass oozes from the speaker as MC Pearl Dragon flows a relaxed and tight rhyme. It’s an accomplished piece of work for an outfit so young. Local alternative weekly paper The Stranger had this to say about Pleasureboaters: “It's hard for them to find a niche with their sound — they thrash, but they're not a thrash band; they rock, but they're not a rock band; they're really fucking noisy, but their sound, though experimental, isn't as messy as a noise band.” Heaving with corkscrewing, discordant sounds and aggressive, back-and-forth guitar thrashing Pleaureboaters are like the friend who always used to get you in trouble by egging you on to do stupid things. Their sputtering juvenile protest, driven by warm silky bass grooves and severed but smooth time changes is so seductive that if you don’t want to break something just for the hell of it, just to feel the venom of living sear the veins, you’ve lost the point entirely.

Play: ‘Elliptical Realism’. Despite beginning like a mash-up of bratty Beastie Boys ‘Sabotage’ vocals and the spluttering bassline from ‘Standing In The Way of Control’ - Pleasureboaters manage to avoid both with use of a dance-heavy backbeat, out-of-control frantic guitars, cries and shouts and, surprisingly, some melody that lurks somewhere beneath. If Past Lives and Pleasureboaters ever played together on the same bill something would, without doubt, get destroyed.

And we’re out. Expect another trail in the next few weeks.