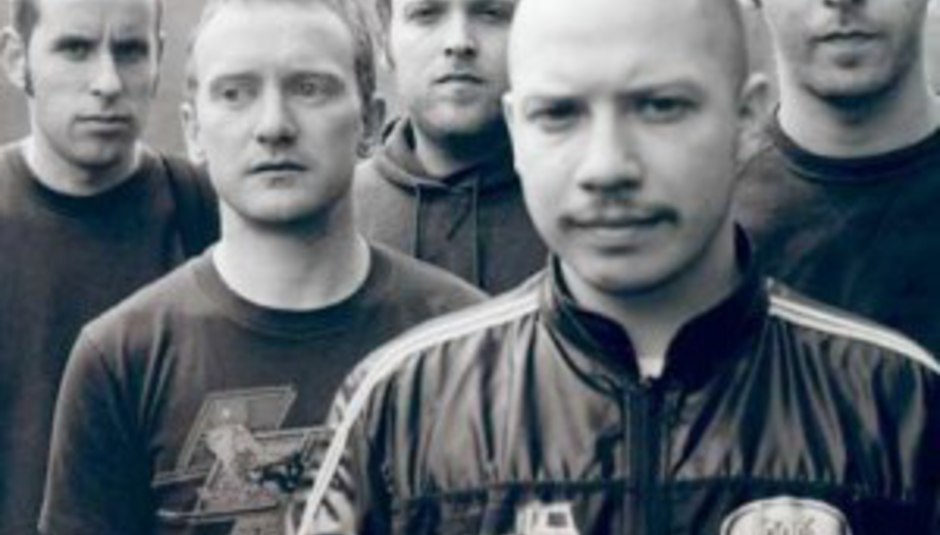 The argument in favour of ditching your wellies and grabbing your passport in order to find your musical summer kicks is almost overwhelming this year. Following on from a Primavera Sound widely held to be one of the best shindigs ever, this weekend sees the cream of Europe and beyond returning to Madrid and Barcelona for Summercase Festival. One of the most notable events over the weekend will be Mogwai playing for the first – and possibly only – time ever their Young Team album in its entirety.

The record, initially released in October 1997, was re-issued in May this year as a belated 10th anniversary edition, backed with a second disc of unreleased and rare outtakes, recordings and live versions. DiS meets Mogwai’s Stuart Braithwaite at the Monorail vegan café and record store in Glasgow’s King’s Court around that time. The band’s nominal frontman is surprisingly relaxed, given that he’s in the midst of remotely mastering the band’s latest album The Hawk Is Howling and admitting that the band hasn’t even considered rehearsals for the band’s two forthcoming Don’t Look Back-syle performances.

“We’ve been asked to do Come on Die Young for Don’t Look Back (ATP-curated album revival shows), and we didn’t fancy it,” admits Stuart. So why now, at Summercase? Any particular reason? “They just asked us very nicely,” he states simply, knocking away suggestions that they were honoured by the request. “No, it was not really flattering. We just thought, ‘Let’s do it’.” Not that he has anything against the like of Sonic Youth, Belle & Sebastian et al performing on the ever-growing run of the successful series: “I think it’s good because it’s done in that way that’s kinda completist. It’s better than seeing bands who are doing greatest hits set.” Besides, he adds, “we’re not going to trawl around the world for four years doing it, plus there’s only three or four songs we’ve never played off it.”

Arguably the most successful post-rock band ever, the band’s debut sprung from humble conditions and was created for very little money in an atmosphere that best seems to be described as ‘tense’. Braithwaite has been quoted some time ago as saying that Young Team was “a total disaster. We were young and naïve and had too little time. We should have said: ‘No, the record isn't done until six months later’. Instead, we sat and mixed whole nights and felt bad. We didn't talk to each other. When the album was released, we just wanted to forget everything.”

Today though, he’s far more levelled in his thoughts. “Listening back, I’m really proud of it. At the time we were really unhappy with it. It’s the least enjoyable record we ever made, we really weren’t getting on that well, which is really unlike us because we’re amazingly good friends and were beforehand. I think we put us under a lot of pressure. There was a deadline to finish it, which now looking back, I think, ‘Why was there a deadline when we’d already released a record (Ten Rapid)?’. We probably just imposed it ourselves. It was all a bit stressful, [and at the time] we were disappointed with it.”

It didn’t help that the band’s creative ethos stopped them from returning to older, or previously released material. “Principles,” he states, with a wry smile. “Logically, we should have re-recorded ‘Helicon 1’ or something. Soon after, people were releasing the same song three times, but we couldn’t even [allow ourselves to] re-record one song!” Recorded at MCM studios in Glasgow, where “there were rehearsal rooms too, and you could hear people covering Oasis songs just as you were trying to have your deep moment,” the band spent little more £2,000 “on a compressor or something” and the record was produced for free by Chemikal Underground label co-founder Paul Savage, also a member of The Delgados, in a studio owned by the label. Costs were stripped right down. One notable aspect about the record in its new form is its remastering – a need that apparently has been noted for some time “Well I agree,” Braithwaite concedes. “I’m a bit deaf now, but everyone’s always said that, that it needed to be remastered.”

Young men – not that they’re old now – when Young Team was released, Mogwai achieved more in a short space of time than Braithwaite admits to expecting or hoping for. “If you’d told me at the time when Young Team came out, I’d be surprised about the way it all turned out. It was pretty gradual though – it wasn’t like we woke up one day and were playing stadiums.” But still, despite regularly playing to between two and five thousand people across the UK and Europe at a time, the band don’t seem phased by their success, and are certainly not bound to the expectations of others. “We’ve always maintained the upstart mentality,” Stuart grins, with a look that implies it’s not about to change any time soon.

Pushed on memories of that time, he reminisces: “I remember about when Young Team went out we were supporting Pavement in America and we were having a lot of fun. It was a good time. When you’re young and good things happen you just go along with it, and it was amazing. And now I look back and I think, ‘That was awesome’. We were young, just 20, 21. We were making pretty good music, going great places and meeting good people and it was great. We were lucky to experience that so young..”

And they’re still experiencing it now. All hail the howling hawks.

Young Team: Deluxe Edition is out now – buy it from the band’s online store. Mogwai’s new album, The Hawk Is Howling, will be released on September 22. See them live in October:

A wider Chemikal Underground feature, with more from Stuart Braithwaite as well as Aiden Moffat and the Delgados, will be appearing on DiS soon.