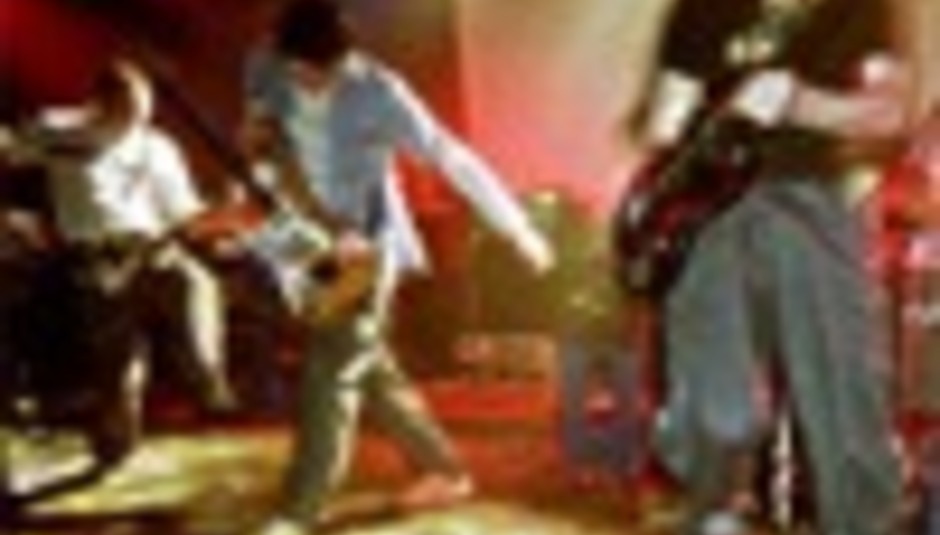 Set the Controls for the Heart of Mong

Set the Controls for the Heart of Mong

I'm sitting in the basement of a café, ahead of Oceansize's one-off support slot with Scottish contrast-rockers Biffy Clyro, in their hometown of Manchester. It stinks down here. And it's cold. It's always too bloody cold. You might not know it, but Oceansize are causing quite a storm in among the painfully calm climes of current British guitar bands. They will display to you an intelligently integrated fusion of jazz and rock and harmonies worth becoming partially sighted for. You know they should be massive. Where is their record deal? I ask Mike, singer and one of three guitarists...

"We're unsigned, but we've very recently been made an offer and were probably going to take it. We were shopped around to all the major labels - all the big fucking daddies. They said they could never sign it because it wouldn't sell the kind of records that they would want it to sell. They want people to be in the charts." Those record deals are coming in thick and fast and they have to be careful to choose the right one, "The label we're looking at would definitely offer us a lot more artistic integrity so we can go off and make that wanky 3-day epic jazz album when were about 30!" Seeing as they're all around 25, that wholly self-indulgent potential masterpiece might just come to be that eternally tricky second album. Something to look forward to, I guess!

You can be forgiven for thinking that Oceansize are a new band, but the reality of it is that they have been together for over 3 years and have recently undertaken support slots on tours with The Cooper Temple Clause and Elbow. They formed way back in October 1998, stealing members from numerous local bands through a mutual respect for each other, "We all met at Uni and were all in other bands when we finished Uni but we were all keeping an eye on each other thinking, 'God he's a fucking great drummer!' and you don't really want to say anything to them, but Mark, saying what he wants, suggested forming a band and we took it up and fucked our old bands off! We all just thought it was great! Everyone in the band is an accomplished musician so were not limited. We can really go off on one!"

And go off on one is exactly what the 5-piece tend to do. It is standard procedure for them to perform a seemingly paltry four songs in a set. The fact that they go on for about 10 minutes each helps to transform it into a meaty set full of emotion, transcendence and a little onstage awkwardness, "Our songs tend to go on a bit because we find it hard to get to end! We've been playing some of the songs from our first ever gig. We over-run because we stop to re-tune so much. I feel like a dick talking on stage. What you say isn't important but people really listen. They take notice!"

What are the influences upon your music?
"Everybody's into a lot of different stuff; everybody's from different schools in a way. Me personally, I'm into Tool and…" Incubus? "I've not really heard them - only 1 song and that was years ago with a cover of a song called 'Familiar' but this was years ago. A lot of people say we sound like Soundgarden, which is pretty good company because I used to really like them. I also really like Mike Patton, of Faith No More. And Tomahawk. We were meant to be supporting them but we couldn't because we were in Texas." They were, of course, in Texas playing at the prestigious South By SouthWest Festival, alongside bands such as the aforementioned Elbow and TCTC as well as My Vitriol and The Lo-Fi Allstars and he laughs as he mentions Starsailor, too.

"We just want to do this full time. I don't expect any massive commercial success. I'd rather we remained a cult act who makes a bit of money because we're broke. Really, really skint. We're going to make nothing of this gig but luckily we've got a good sound engineer who knows when to turn it up! But he costs money. At the start you've got to shell out, if you want people to get it. Hopefully it'll pay off." It's paid off pretty well judging from the intense industry interest, coupled with the utterly positive feedback received from the crowds across the country. "I want the opportunity to do this as a living, because we all work during the day so all our energy is pretty spent by rehearsal at the end of the day. The worlds our fucking oyster. We could make so much great music but we just need the time to do it"

What's your favourite cheese?
"Well, in Iceland I can get 2 blocks for £1.99. I don't eat good food because I'm really penniless. I'm currently living on peanut butter sandwiches and chips. Loads of vitamin pills! If my mother reads that she'll go mad!"

Tell us a joke
"A bloke goes into a post office and says, 'Can I have a bag of chips, please?' The clerk says, 'This is a post office.' He says, 'Its ok my bike's outside.'"

Having played in the Manchester area for the past three years without any real notice taken of them, it became evident to the band that certain people were beginning to take a dislike to them, "Its getting really weird around Manchester because people just don't like us very much because we've played here so much. We just get panned. The Hop & Grape [with The Cooper Temple Clause in February] was the best gig we've ever played because there was such a great response and such an atmosphere - it really blew me away."

"When we were playing it didn't feel as if people were that bothered because they don't react - they just stand there. Maybe with familiarity people might because toward the end they go 'I think I like that'. You can't dance to our stupid time signatures anyway…jazz out! I like to think we're a more heady kind of band, which you can put on your stereo and chill out to. Someone has accused us of not having any groove: it's just that we don't groove in 4/4! If you can follow it, you can groove. I don't like a nice recognisable tune, which is like a nursery rhyme, which you don't really need to hear again because it's stuck in your head. I hate bands with the element of predictability because they are quite inarticulate. There are a lot of bands round here that totally rely on the cheesiest chord progressions. I like to think that our music, with repeated listening you'll hear more and more things and different textures."

It seems that Oceansize will be here for a while then and they're going to bringing you something a bit new, very soon. Turn your radios up. And wait.