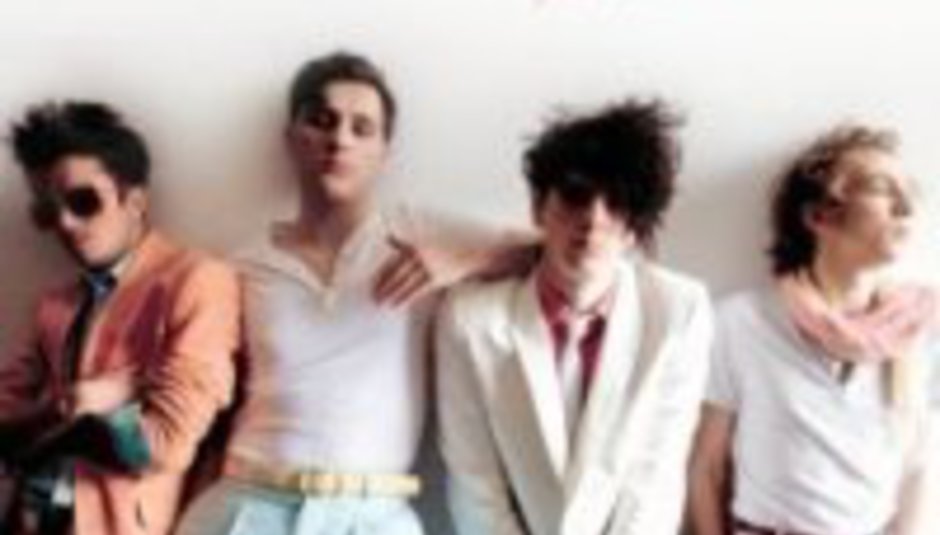 A rare moment of doe-eyed clarity among the mess of ill-starred affairs and badly-disposed-of rubbers that litter Mystery Jets’ rightly-applauded 21, ‘Two Doors Down’ fairly fizzes with nervous glee at a prospective romance.

Bounding brazenly towards a peach of a chorus that openly cribs off Whitney Houston’s ‘I Wanna Dance With Somebody’ before launching into an absolute shameless hussy of a saxophone solo that'll raise two eyebrows before spreading a smile on your face so indelibly stupid they’ll have to scrape it off with a hot trowel.

Incidentally, if there are any girls reading this partial to dancing around the room to a worn-out copy of Marquee Moon, my email is in the contacts section and I’d be more than happy to provide the soundtrack.

For the progressively-minded amongst Malkmus’ friends, this might be a maddening throw-back to latter-day Pavement years rather than the more ‘challenging’ efforts of Pig Lib. For those of us requiring a bit of enjoyable sunshine pop, it’s just the job. Perhaps free of all self-imposed shackles with Creedence Clearwater obsessions purged and more than half a decade of solo intercourse, Stephen is probably just happy to be doing what he wants. If that’s the case with ‘Gardenia’, all bright guitars and shimmering ‘ba ba ba’s then hey, we’re certainly very happy for him. GD

Spazzcore-pop (think early Supergrass weaned on Black Flag instead of the Kinks) from Blood Brothers and Pretty Girls Make Graves alumni, Jaguar Love show early promise with lead track ‘Highways Of Gold’, which is well worth a few minutes of your time if only to hear Johnny Whitney’s Bolan-mainlining-helium scream of “CRYSTAL METH” part-way through. ‘My Organ Sounds Like...’ pushes into still-more accessible waters while ‘Videotape Seascape’ is a slightly more generic affair that nonetheless fails to dim the feral intensity of the whole.

It’s good to remind yourself that sunnyside-up Elbow works just as well as beautifully maudlin Elbow. ‘One Day Like This’ is from the school of beatific, epic indie rock with a sunshine bent and is almost assured of use in the BBC shots of a caked Glastonbury Festival with beery punters enjoying their swim in some sort of South Western cess puddle. Or perhaps in the closing montage of an unfavoured Euro 2008 entrant gaining an unlikely victory over a set of overpaid monoliths. Either which way, it’s a wonderful track full of hopeless optimism and opened curtains-as-metaphor-for-life. But, buy the album, of course. GD

Does It Offend You Yeah? – ‘Epic Last Song’ (Virgin)

For a band whose musical output always implies that they have a chronic case of ADD, it’s fitting that their ‘Epic Last Song’ endures a mere 3.19 in length. Oddly enough, by attempting to move away from their usual spluttering guitar-electro skunkbath, they succeed in only sounding like all those bands that you were originally and briefly relieved that they didn’t sound like. Like Pigeon Detectives with Tron visors. Strange. GD

Traditional ‘taster’ for Ms Wasser’s forthcoming second album (we used to call them singles), ‘To Be Loved’ is a nugget of simple, flickering soul that sounds like it was recorded barefooted in a New York studio at midnight. Actually, it probably was, therefore this gets points for transporting you directly to point of origin. It also gets high marks for being rather lovely and affecting. Music for dads who’re cool, but not annoying, then. GD

The Rascals? Miles Kane, the shit one from Last Shadow Puppets, right? Er, not exactly, no. ‘Phantom Freakbeat’ might lack the wattage tunes-wise of LSP’s better moments, but is heavy on the psychedelic pop-noir vibes that made their debut tick – think The Coral meeting Clinic in the boat sequence from the original Charlie & The Chocolate Factory and you’re not a million miles from this track’s clanking, heavy vibes.

Black Keys are from Akron, Ohio, also home of the world’s greatest cultural writer, Chuck Klostermann. Therefore, the most salient question to ask right now is; would Chuck like ‘I Got Mine’? I don’t know to be honest. Chuck did grow up liking hair metal bands and then had a long and worrying obsession with U2. But he does think that Radiohead’s Kid A is a piece of mortal genius. So maybe, somewhere between the three would lie a high regard for the works of the blues ruck duo. I guess a better question would be; what would Chuck say about the Black Keys? Of course, attempting to channel the man’s genius would be a fool’s errand. If I could write like Mr Klostermann, I would probably not be doing the DiS single round up. Or at least, I would be getting paid a shitload of cash for it. Good song, though. Ripping.GD

A gentle rollick abetted by London cohort Emmy The Great, ‘The Boat Song’ is a mid-tempo strum underpinned by rolling drums and tumbling piano, which nonetheless might be found wanting next to, say, Johnny Flynn’s bold pastoral strokes, or Laura Marling’s oftentimes scary songwriting prowess. I’m not convinced the AA-side, a live-band reworking of New Order’s ‘Temptation’, is strictly necessary either.