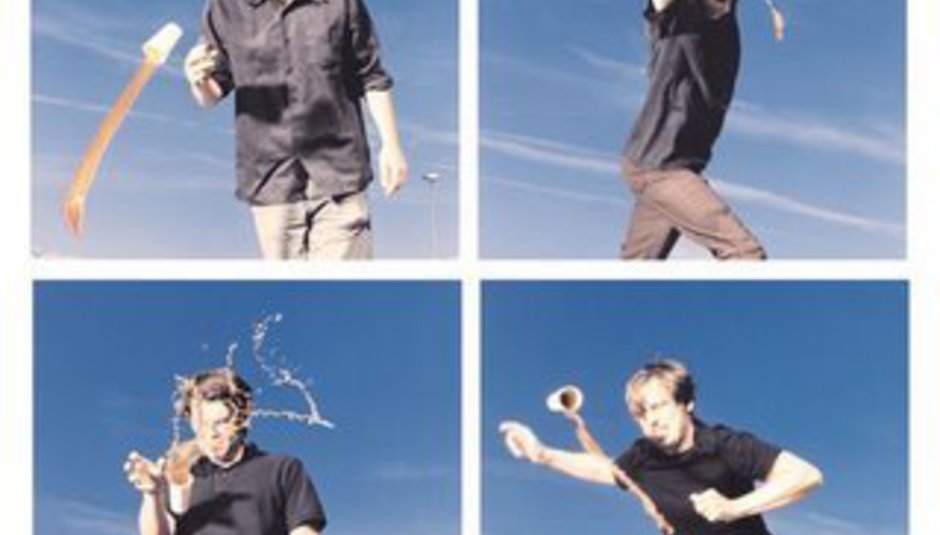 The Notwist – ‘Where In This World’ (City Slang)

A country mile, the gulf, aided indeed by the fact that German indie-electro sorts The Notwist haven’t shown face for some six years, save for the 13 & God project. ‘Where In This World’ breaks the hiatus in a muted manner, three parts Hood to one part 65days, but beyond that the song’s instant appeal is quite indescribable using acts of best-fit reference. It’s nothing studied admirers of such glitch-addled guitar music won’t be familiar with, and nothing that’ll throw longstanding fans of the group, but it’s lovely all the same and possesses that special air of escapism – an impression enhanced by its video – that helps us all forget the mundane everyday once in a while. Dreamy, delightful, a little darker than your standard round-up-featured standalone: The Notwist land our Single of the Week accolade with ease.

‘Where In This World’

You could slice my belly open, spill my intestines into my open palms and instruct me to lie facedown in a pit of smouldering coals while your wonky-eyed mate covered my back in pigs blood and sausage meat before gathering up a clutch of hungry rats and putting them to work. I’d do it, if the alternative were having to hear this again. ‘Mistress Mabel’ is pure by-numbers fare from Brit-winning Scots The Fratellis, although singer Jon’s told DiS that this isn’t entirely representative of parent LP Here We Stand. My vital organs pray he’s not pulling anyone’s legs.

Sorry, remind me why This One’s sold more records than The Other One? Oh, I see, The Other One was a bit on the tubby side. People are really that fickle? Great voice, loads of potential, big critical favourite… but the girl’s had a few pies? Fuck off Duffy, fuck off right back to whatever reality competition talent contest rock you crawled out from under a couple of years ago without alerting anyone to your ‘smoky soul vocals’ or ‘stepfather’s hitman story’ back then. That Anyone cares now is because Anyone is stupid. Everyone should make up their mind and give The Other One a raise. That way she can buy more pies and really fuck off Anyone until Anyone realises This One’s so fucking dull it’s a fucking miracle I’ve managed to write anything at all loosely related to such ironically soul-suckingly stagnant dogshit. Fucking rubbish.

“It’s familiar, familiar,” sing jolly prancesters Hot Club De Paris – or should that be pranksters given the nature of this single’s You’ve Been Framed video? – and while there’s definitely a little less of the pedal-down gas here than was evident on the four-piece’s debut LP Drop It ‘Til It Pops those well-accustomed with their melodic fare will find nothing to throw them a curveball here. No criticism that, though, as this is as neat and tidy a (potentially sing-along) indie-pop number as you could hope to hear on a Bank Holiday morn, albeit one with lyrics truly bizarre. An ode to the simple housebrick? Ish, and its ‘many’ uses.

If your name was Tramar Dillard you’d want to adopt another moniker for a crack at the music business, but Flo Rida? C’mon, Tray – I can call you Tray, right? – that shit’s hell lame. I don’t care if it’s where you’re from: call yourself MC Florida or something. Makes more sense. What the heck is a ‘Flo Rida’? Something to do with lavatories? You’re a clever guy – you went to university and everything. Jeez. Anyway, this song, the follow-up to in-at-two effort ‘Low’, that one where nobody involved could properly pronounce “looking at her” after noticing that “herrrrr” was sporting some fine pants: it’s a slickly assembled scattering of stutter-smut beats courtesy of rent-a-grunt Timbaland – why must he get his own vocals on everything he fiddles the levels on? – that grinds to a well-established groove while a young lady bumps with our lead rapper in– you got it – an elevator in the accompanying promo. Oh, and Timbaland does that stupid face o’ his like he does in every video he’s ever in. Why must he get in every video to every track he works on? He’s always going to do that face. When his eyes go big and his lips purse and you’re not sure if he’s having a stroke or there’s a strange new breed of Hawt American Ass that goes crazy for such wacky shit. In a sentence: even if this track had JT out front it’d be instantly forgettable.

It’s the urban Will Young everyone! ‘Urban’ in a MOBO sense, you understand, rather than meaning ‘I Can Be’ is best listened to in the middle of London, over, say, Berkshire, where Will’s from. Taio Cruz has written for Will in the past, but now he’s getting selfish with the goods. C’mon, Taio, play fair – no middle-class 12-year-old who doesn’t yet understand that ‘gay’ doesn’t just mean ‘something that’s a bit rubbish’ but also ‘man or lady who likes to have sex with another man or lady, the main point being they’re both the same sex while they’re having sex’ has heard of you! Give your songs away to big-jaw pretty (gay)boys and make loads of money! Look at Beverly Knight! She got her MBE for charity work, not her music! Another exclamation mark!

‘Echoes Round The Sun’

Jennifer Ellison’s Danish sister squeaks beside some B&S fanboy look-alike over the top of an arrangement ABBA would’ve considered too cheesy to use and Peter Robinson loses his shit. “Love is an ocean, sweet in motion.” What the absolute extremities of fuck does that mean? Throwaway pop with throwaway lyrics about throwaway nonsense is fine so long as nobody’s actually taking it seriously. Oh…

A bunch of Get Up Kids fans are shown the green by some twit in a suit and told that Enter Shikari are hot shit with the kids. Said bunch write a song that’s all GUK without the sincerity featuring some of that Shikari synth droning and wobbling away in the background. Read OK on paper? Forget first impressions – this is lowest common denominator contemporary emo, whatever, one sliced wrist short of bleeding its limited appeal out entirely. If you’re buying this sort of crap, kill yourself.

Given the general dearth of anything approaching a halfway decent single this week, seems fair to drag one up from a week ago that inexplicably missed the round-up cut. I blame cheeky posties making off with our promo goodies. Brummies JoFo will be as familiar as close family to regular readers, and those hearing them for the very first time below are sure to be hearing much, much more in the coming months. They play spiky indie-pop soaked in buckets of sweet sweat, with lyrics that stick in your head for far longer than your general practitioner would be happy with. In fact, so many times do I find myself mouthing words from the band’s Waited Up ‘Til It Was Light album, out in June, that I fear I’m secretly engaged in an against-my-wishes affair with frontman Alexei, and he’s whispering these clever rhymes to me as I wriggle through a drugged sleep, rich imagery of teenage love, loss and rediscovery infecting my nightmares. Actually, why not: get me sober and let’s get hitched.

I’ve always thought pleasant Californian four-piece Rogue Wave were just one song off the critical and commercial splendour of similarly toned peers (and former labelmates) The Shins; ‘Lake Michigan’ might not be that breakthrough-proper song, treading as it does paths more familiar to fans of (another Sub Pop act!) Band Of Horses, but it’s super nice nevertheless, in a distantly engaging sense. You’ll hear it, think it’s good, wonder who it is by, find out, and never buy an album by its makers. That sort of process. Video’s really nice, too. Makes you wish it wasn’t so miserable outside, so you too could smack skins under a sprinkler.

The one from Bloc Party who’s never used his money to buy a proper haircut teams up with Melina Mepris – us neither, but the pair met in New York – to produce a single that could have been Pretty Girls Makes Graves-echoing with greater tender loving care; as it is, ‘Cryptic’ sounds like a bad Bloc Party song with a rather nasal female singer on lead vocals. Pin Me Down is an avenue worth pursuing as a side project if other tracks DiS has heard are anything to go by, but this first-out-the-bloc(k)s effort’s rather too tame to give absolute beginners much to look forward to.

The Zutons – ‘Always Right Behind You’ (Deltasonic)

Better than The Fratellis’ single, words on which you may have noticed above, but no ‘Tiger Feet’. It’s the one that’ll have your dad asking: “I heard one of your bands earlier today that I really liked, this band called Zutons or something; you got an album I can copy?” Keep it dad, keep it.

‘Always Right Behind You’

Guillemots – ‘Falling Out Of Reach’ (Polydor)

Many-feathered sorts Guillemots explore another string to their colourful bow – the acoustic ballad. There’s some trumping, and an organ too, but the sum of this song’s parts are rather better than the overall product – not that this means some pop artist won’t have a crack at covering it for Jo Whiley’s Live Lounge before long. Seems set up to be co-opted by a bigger act and turned into a number one.

MGMT and Yeasayer have done okay, so why not, eh?

You ever see Cribs with Alanis Morissette’s pad on it? Funny little shrines everywhere, all open plan, kinda minimal. You can look at that two ways: one, she’s careful with her money from breakthrough album Jagged Little Pill, or two, she blew it all on paying off label people to bury her MCA-released Canada-only early work. Hope she’s a few bucks in reserve, because she’s going to need to get that spade out again. Actually, no. No. Why did we ever buy into this in the first place? Alanis Morissette is awful. Awful awful AWFUL awful AWFUL. Awful. She can’t sing! Her songs are all rubbish! BYE ALANIS.

It won’t surprise you to learn that other singles are also released this week – if it’s not here, you’ll find it on some shelf in some shop somewhere. Enjoy that.