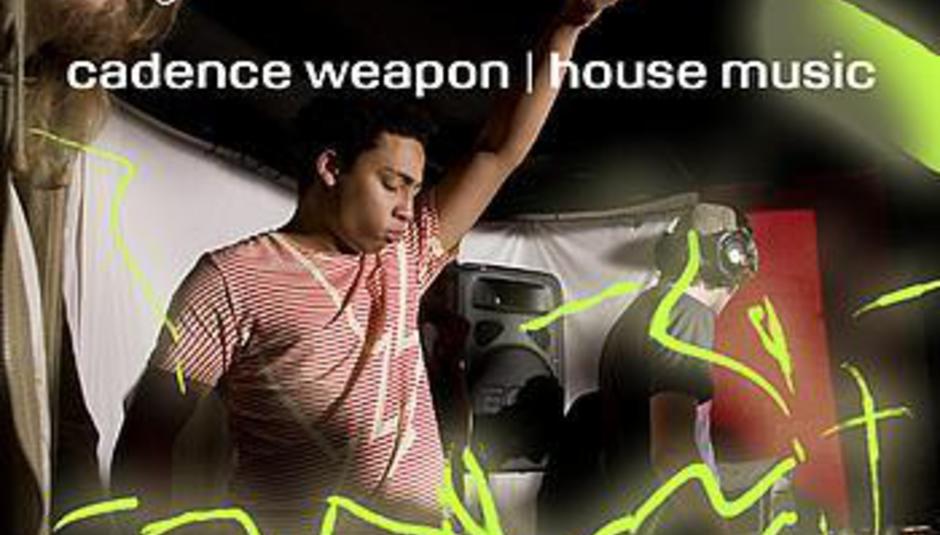 Cadence Weapon – ‘House Music’ (Big Dada)
Most rap fans with half a brain and a modicum of taste will already own Cadence Weapon’s second album of earlier this year, Afterparty Babies (review), but if not this is as good an opportunity as any to hop aboard and realise why DiS is so enthralled by the Canadian emcee. ‘House Music’ is feverish of BMP, its parent LP’s most thrilling four-minutes-something from a sweaty reveller perspective. Penned purely with starting parties in mind, the track is here accompanied by a remix from A1 Bassline, whose reworking twists the original into a – surprise! – bassline banger that’ll sound great bubbling out of a blacked-out hatchback at a South London crossroads, red light outstaying its welcome. Feel the bottom end fall out of the club, and the Peugeot, as your ears pop – it’s a synapse-tingler worth your topmost dollar.

Catch Cadence Weapon live on the DiS stage, at Digital, at this weekend's The Great Escape, Brighton

Violet Violet – ‘Bring! Bring! The Dawn And Bike Till Morn’ (NRONE Records)
Or perhaps ‘Bring! Bring! The Morn And Bike Till Dawn’ – it’s written both ways on the accompanying information. Bravo. Violet Violet are an all-girl trio from Norwich playing relatively dated, but certainly energetic, rock music that’s a few hooks short of being particularly memorable but spiky enough to suggest they’re probably worth catching live – a little like Blood Red Shoes without the pop edge. If this part one of two – featuring the tracks ‘Spicy Noodle Treasure’ and ‘Cereal Reflector’ – appeals, part two follows in July.

Midnight Juggernauts – ‘Shadows’ (Charisma)
Inoffensive indie-dance with shimmer-gloss all over it, crisp synth lines and bouncing bass, ‘Shadows’ is Aussie outfit Midnight Juggernauts’ latest attempt to woo the critics of their adopted homeland – the band relocated to London from Melbourne not too long ago. It’s very neatly arranged and everything, but for a track designed to move a dancefloor ‘Shadows’ is surprisingly muted of exuberance. Perhaps their forthcoming Dystopia LP will clear up exactly what they want to be – a DFA-style rock combo or slick modern dance deities. One super plus of this single, though, is the M83 remix: utterly gorgeous stuff.

The Presets – ‘This Boy’s In Love’ (Modular)
Standard fare from Australian duo The Presets, whose take on bleep-addled indie-pop isn’t as feverous as SMD, for example, but can usually get bodies moving in a suitable fashion. ‘This Boy’s In Love’ is no ‘My People’, the band’s previous single, but a slight suggestion of heartache in the lyrics lends the piece a greater depth – arms in the air, sure, but engage the soul, too. It’s quite possibly what The Pet Shop Boys would be doing had they emerged nowadays rather than the ‘80s, and if they really liked Interpol – no bad thing, all told.

Ida Maria – ‘Queen Of The World’ (Waterfall/RCA)
We initially thought Ida Maria was being marketed as cool, trendy, relevant – there she was, playing bills featuring Hot New Acts, in grotty shithole venues about the land. But here she is, …Jools Holland performance recently bagged, singing like KT Tunstall without the Scottish spirit. Sure, she talks about whiskey here, but this isn’t rock ‘n’ roll. It’s Tesco-aisle pop, pure and simple, for chumps who swallowed the whole Sandi Thom thing. If that ticks your boxes, be my guest, please.

The Death Set – ‘Around The World’ (Counter)
Warning: this will infect your blood given prolonged exposure which, since you’re asking, is roughly comparable to the 2.16 of the title track of this six-track EP. Baltimore’s The Death Set manage to make retro bleepery sound like gleeful playground punk rock, fashioning their limited arsenal of aural weaponry into something that’s sure to get a body part or two twitching. They’re the Crystal Castles who’re into peace and love, leaving the violent side of said comparison act buried beneath their rainbow-coloured cacophonies. Fucking no-rave hippies, eh: give ‘em an inch and they’ll steal your dancing shoes.

Get Cape. Wear Cape. Fly – ‘Keep Singing Out’ (Atlantic)
…of your CV when sending out job applications in a couple of years? Sure, go ahead Sam – last thing you want is potential employers hearing bland strum-alongs like this, what with all your rhetoric elsewhere (although if you're 14 this is probably changing your life right now). A point worth noting: many people this reviewer knows, who are in turn friendly with Get Cape (a.k.a. Sam Duckworth), tell me “he’s a lovely guy, but…” What? “Well, you know…” After hearing this: yep, loud and clear.

The Thirst – ‘Sail Away’ (Wooden Records)
Please, do – this is atrocious, eleven-rungs-lower Artics rip-offery, with an annoying Peñate-style twang to the vocal delivery. The Thirst have jammed with Pete Doherty. Ronnie Wood ‘discovered’ them playing the Half Moon down in Putney. I don’t really need to say anything more, as you’ve either sussed this lot as something you wanna hear or relegated them to the ‘never listen once’ pile. How I wish I’d simply chucked ‘em that way this morning rather than play ‘Sail Away’ all the way through. You should have seen the expressions in the office – like I’d just proposed to a colleague’s mother.

Teenagers In Tokyo – ‘Very Vampyr’ (Back Yard)
Teenagers In Tokyo’s ‘Very Vampyr’ is a stale-sounding disco-punk groove with dumb synths and vaguely post-rock guitars wibbling away This Modern Love-stylee in the background. I quite like the vocals, mind, although perhaps only because it makes this record sound further away. AD

Black Lips – ‘Bad Kids’ (Vice)
Staying admirably true to their template of reheated R‘n’B classix sung with all the care and precision of ready meals slung in the microwave, ‘Bad Kids’ is marvellously short, sweet and sloppy, proving definitively that while their cocks may be inappropriately out, Black Lips are officially beyond reproach. AD

One Little Plane – ‘Sunshine Kid’ (Text Records)
One Little Plane is the musical alias of one Kathryn Bint, whose soporific tones threaten to lead ‘Sunshine Kid’ into Norah Jones territory at any minute, especially when it’s wrapped around lyrical nuggets as insightful as ”I know that life is grand but mostly it’s just a pain the ass”. Still, it’s mercifully quirk-free and features some nice staccato guitar work so we’ll just call this a pleasant nothing and leave it at that. AD

The Rrrs – ‘My Valentino' / 'Forbidden Kiss’ (Headtones)
Easily the worst thing I’ve heard in 26 years thoroughly misspent on planet earth is ‘My Valentino’ by The Rrrs. The singer sounds like she’s wandered off a happy hardcore record and into an Echobelly B-side circa 1997, which I suppose is as vivid a rendering of hell as I can imagine this morning. The red hot poker up the bum would come as a relief, frankly.