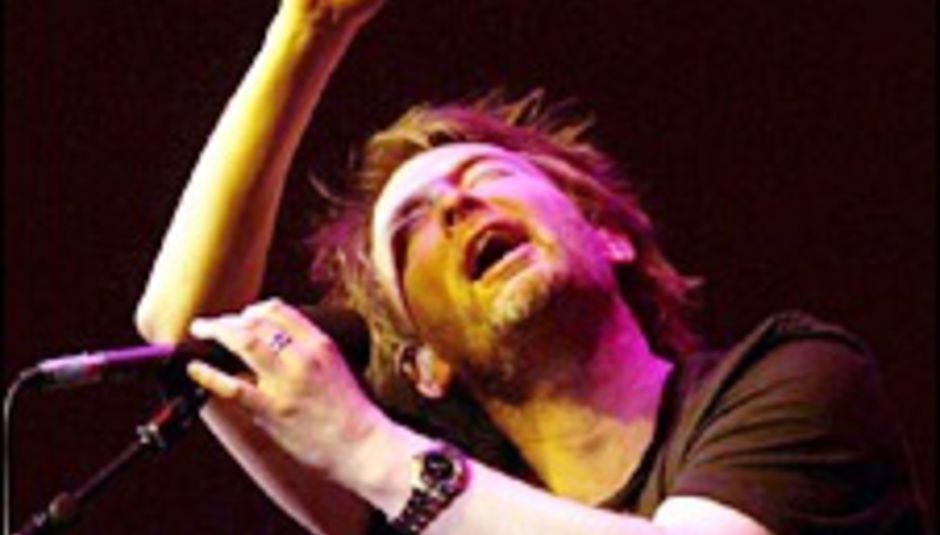 I’ve seen* Radiohead* in all kinds of places… Enormodomes, traditional British theatres, an ancient coliseum, TV studios, fields, parks… And now I can add to the list the tiny yet impressive BBC Radio Theatre. Twice, I’m almost ashamed to say.

As part of an almost SAS-style ‘in and out’ operation, yesterday saw Radiohead perform two (mostly) different sets in one day, for three national BBC Networks (Radio 2, 6Music and Radio 1) and a worldwide web audience.

As I said to my boss as the last note of ‘Airbag’ fizzled out before us, half a decade ago I thought I’d been slipped a ‘mickey’ when my ears were telling me that Ken Bruce – yes,_ that_ Ken Bruce, respected Radio 2 veteran – was playing a Radiohead track on his show! But blow me HE WAS! The track was ‘There There’, and in many ways that moment signalled a new dawn for the network previously considered the playground of the UK’s more ‘mature’ listener.

Some five years later saw my old mukka Mark Radcliffe introduce the band as they played the second of two live sets into his evening Radio 2 programme... and no-one even flinched! My, how things have changed.

Set one… After being encased in a ‘holding room’ for half an hour the 200-plus ‘Lucky’ (sic) audience was allowed in to the tiny confines of the Radio Theatre, which has previously held live ‘happenings’ from the likes of Bowie and R.E.M., and also Nicholas Parsons.

Steve Lamacq, in his introduction, discreetly told the audience that standing would be tolerated. It wasn’t. Two feisty young upstarts on the front row did just that - and were told to sit down, prompting a sneer from Thom Yorke. The band were more polite than usual – this was far from a typical Radiohead gig – but despite this the set was edgy and decidedly short on ‘hits’. In fact, there weren’t any. Radiohead had come to play – but thankfully they didn’t take the easy route. No ‘Karma Police’, no ‘No Surprises’, and no-one shouted out for ‘Creep’. Excellent. Recorded for 6Music (Steve Lamacq) and Radio 1 (Colin Murray), the performance was – as expected – nothing short of brilliant. Highlight for me was ‘Morning Bell’, or maybe ‘Bodysnatchers’, or... hmmm.

Apart from a repeat performance of ‘Optimistic’ - they weren’t happy with the original rendition - there was no encore. Forty-five minutes: they came, they saw, they conquered. Oh, and they’re coming back in five hours’ time to finish the job off.

Set two… Ding ding! And we’re off again. If we thought the band were saving the more ‘user-friendly’ songs for the Radio 2 audience we were wrong. ‘Bodysnatchers’ wriggled its way around the room; ‘All I Need’ and ‘Nude’ followed. ‘Airbag’ was the first sample from their “pundits’ favourite”, as Thom called OK Computer. What once sounded like a brilliantly disjointed art-rock attack now sounds like a million other songs that followed it… but miles better, a sort of blueprint for modern song-writing for the world’s youngsters. Radiohead make the mould, break the mould, make the mould, et cetera.

It was only during ‘Lucky’ that it dawned on me that what is one of Radiohead’s greatest musical achievements (and arguably the catalyst for their ensuing musical manifesto) was in fact too BIG to be played in such a small room. Sure it sounded great – but it was almost as if the walls were bulging, trying to contain what is one of the great ‘outdoor’ musical experiences. It really needs to be unleashed in a field – and enjoyed with at least 20,000 other people. Not that I’m complaining!

After a mesmerising ‘Everything In Its Right Place’ Radiohead left the stage. Exhausted. After the radio transmitters shut down ‘they’ came back for one more song... and strangely it was one of the best moments of the day. Just Thom and Johnny – both with acoustic guitars – performing ‘Faust Arp’. Understated and untouchable.

It’s impossible to guess how many people heard yesterday’s performances, but between good ol’ Auntie Beeb and the internet I can guarantee there were lots of happy Radiohead bunnies out there. Well, perhaps happy isn’t quite the right word.