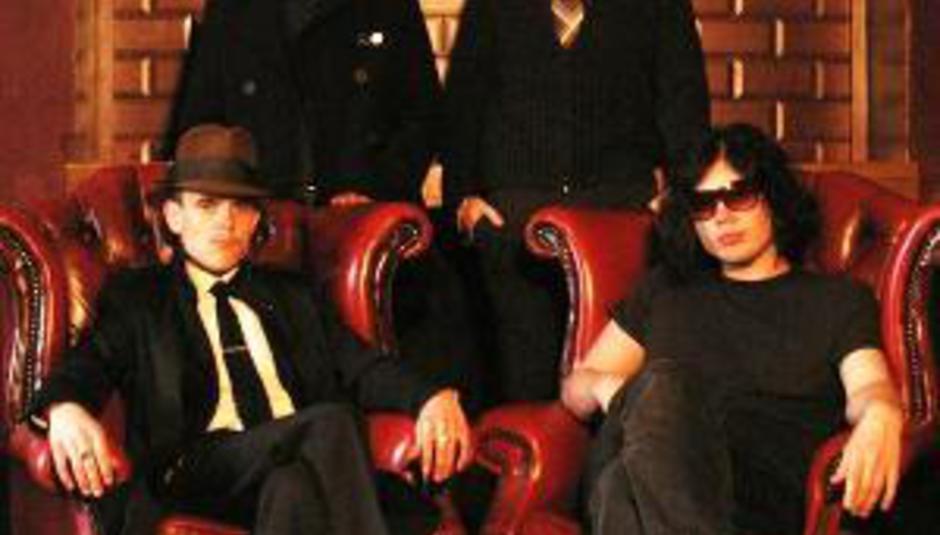 Beestung Lips are a furiously passionate punk-rock four-piece brawling out of Birmingham with firework riffs and rambunctious percussion. DiS is already on record thusly: “noticeably pissed-off and acerbic like so few acts proclaiming to be ‘punk’ actually are.” Need touchstones? Hot Snakes, The Jesus Lizard, The Birthday Party. Some’ll say Gallows, and there’s a little truth there: they’ve certainly a similar crossover potential.

The quartet are, according to MySpace, Hetro Pearton (vocals), Pout Pearton (guitar/vocals), San Diego Pearton (bass) and Action Pearton (drums); at least one of them is also known as Thomas, as it is he that has answered our DiScover questions. Hello Beestung Lips - please run us through the whens and hows of the band's formation - members had served time in other outfits previously, yes? What was the goal, if anything particular, in bringing this band together?

We have all played in bands together over the years; to list them would serve no purpose. We want Beestung Lips to stand on its own merits. We just want to make music that we are happy with and that stands the testament of time.

Is Birmingham a particularly healthy city for punk-rock bands to work, rest 'n' play in? You've Supersonic, of course, and the other Capsule (local bookers and the label that released the band’s EP) events - seems like a nice little scene's going on. Besides yourselves, are there other Birmingham acts you're keen to sing the praises of?

If you listen to the lyrics at the beginning of our EP (Songs To And From An Iron Gut, 9/10 review) I think you will realise our views on Birmingham.

Although there are people like Capsule doing amazing things, there is a lot of dross that you have to wade through. It seems that the younger section of the Birmingham scene want to listen to ironic dance music and get off their faces on pills. And to be honest with you I’d rather do the same thing than face another lacklustre gig at the Dog and Trumpet.

Live music and music in general is dying because people are trying to do things the industry’s way. People should kick back and spit in the face of the shiny equipment and pay-to-play attitude of the industry. Too many bands are prepared to jump through hoops like performing monkeys. We are not performers.

As far as bands, I’d say Calvados Beam Trio (MySpace) and Mills and Boon (MySpace) are our favourites. They are good friends and are amazing at what they do.

Mills and Boon are like Captain Beefheart meets Ivor Cutler. They like a drink and the occasional illicit substance. That helps.

Calvados Beam Trio are just incredible. They blew Don Caballero away at their own game when they played with them. They don’t necessarily sound like these bands but are influenced by groups such as Gastr Del Sol, Bastro and Bitch Magnet.

The EP was well received upon its release - are you a band that's keen to court the press, and receive positive feedback, or are you not especially concerned by what critics might have to say, for better or worse? Is there anything that sticks in the mind, that's been written about you - again, either positive or negative?

We don’t give a shit. It’s nice to hear that someone likes the EP. Or what we do. But you don’t play the music we play and the live shows we do to be liked. We like confrontation. It’s part of what we do. But also we aren’t out to sabotage ourselves before we really get started. I think people aren’t stupid and they do realise that there is a lot of back-scratching in the music world. ‘It’s not what you know, it’s who you blow’. We aren’t prepared to blow just anybody.

I remember we played with These Arms Are Snakes and Pelican. This hack made some pretty funny comments about us thinking we were more popular than we really were, having bad attitudes, and generally being obnoxious. No doubt we were. I think we stuck it up on our site for a while actually. I suppose there is no such thing as bad press.

What about a follow-up to the Iron Gut EP? Is there another release in the works? Are you writing material with an eye on an album, and if so are there any rough release times in mind? Presumably you'll continue to work with Capsule, or has the EP stirred any interest at other labels?

The plan is to stick with Capsule for the next release. They have been more than supportive. They are also friends. I think that is of importance when creating the music/art we want to create. We have a common goal. They know we have our personal difficulties from time to time. They have been very patient and supportive.

We have 12 tracks ready to record. We are looking at recording them for around April then we want to get it out in as quick a time scale as possible.

The recording process for us is usually very quick. We record everything live, apart from the vocals, and don’t use overdubs. I think this gives the music an honesty lacking in a lot of music at the moment.

The album will be a step forward from the EP and will also tie in with it. I think it may surprise a few people. It’s not like we have made a prog record or anything, but we have certainly moved on from where we were. You've literary influences listed on your MySpace - as important as any bands that you've been raised on? On a bands front, do you think you've any parallels with any acts - contemporary or older - in particular? What do you make of being compared to a band like Gallows? Is this a positive thing in your opinion?

Our day-to-day lives are a massive influence in everything we do as a band. It’s not like we just play music that we think sounds good, although that helps. The music is a soundtrack. A soundtrack of where we are at that point. Each record we make we hope will be like a novel. Like (Charles) Bukowski, we work under a pseudonym, ours being Beestung Lips.

And about the Gallows thing…

To be honest, we aren’t really fans of Gallows. I can see where people get the comparison from, purely from the energy of the EP and the live show.

If someone comes to a show or buys one of our records because of the comparison I see that as a good thing. I just don¹t like the idea that people may think we are jumping on a bandwagon. We don’t want to be the next Nirvana, the next At The Drive-In, the next Gallows, the next Joe Shit and the Ragmen. It’s bullshit. There are a thousand bands out there that are as good if not better that will never get heard. We just want to make one record that will last the test of time and play shows that stick in people’s heads. Something that will live on after we no longer do.

I think as far as approach, maybe we have parallels with bands like PiL?

Oxbow are heroes of ours, as were The Jesus lizard. We are all in love with the no holds barred way they go about everything thing. There is no danger left in music. You turn up plug in and that’s it. It’s become very stale and very boring. Anyone can thrash about onstage and talk about how their lives suck and how they bleed into their instruments... but when you can taste that true danger in the air and you know it’s not just a show, that feeling is unbeatable.

News updates seem to suggest turbulence in the Beestung Lips camp - have you had some issues to overcome that you're up for explaining, or are private matters best left private? Are you looking to book shows in earnest soon? I see you're playing with Pissed Jeans in May - a date to look forward to?

I think our personal lives should be kept as that but we also owe an explanation to people who have been looking forward to seeing us. All we can say is we want to play more than anything. We aren’t rock stars, we are real people with real commitments and problems.

After the Pissed Jeans show things should kick up a notch.

How have you found your past London shows? Is the capital generally good to you, or do you find livelier crowds in the 'regions'? What's better - a crowd of six flailing about having fun or a crowd of 600 with arms crossed?

Every crowd is a good crowd, although London has got a stand-back attitude compared to other cities. When we have played with Qui in London before I think people didn’t know how to take us. I don’t think that people ever will.

Our perfect show is where there is no middle ground in opinion. It’s either “holy fuck”, or “that was shit”. If you walk off thinking “meh” we have done something wrong.

Have you ever actually been stung, on a lip or elsewhere!? Y'know the average person apparently gets stung by a wasp or bee twice in their lives, and that the sting can be soothed by rubbing on some raw onion... just a tip there.

When I was a kid I got woke up by shit loads of bees in my bed. Fuck knows how they got in there. It was like being woken up by electric shock. If only I was spooning an onion at the time.

Lastly, what've been your favourite musical discoveries of late that our readers should definitely be checking out?

The six-track EP Songs To And From An Iron Gut is out now on Capsule. The band’s MySpace site – news/info/songs – can be found HERE. That Pissed Jeans support date: May 12 at Birmingham’s Rainbow.