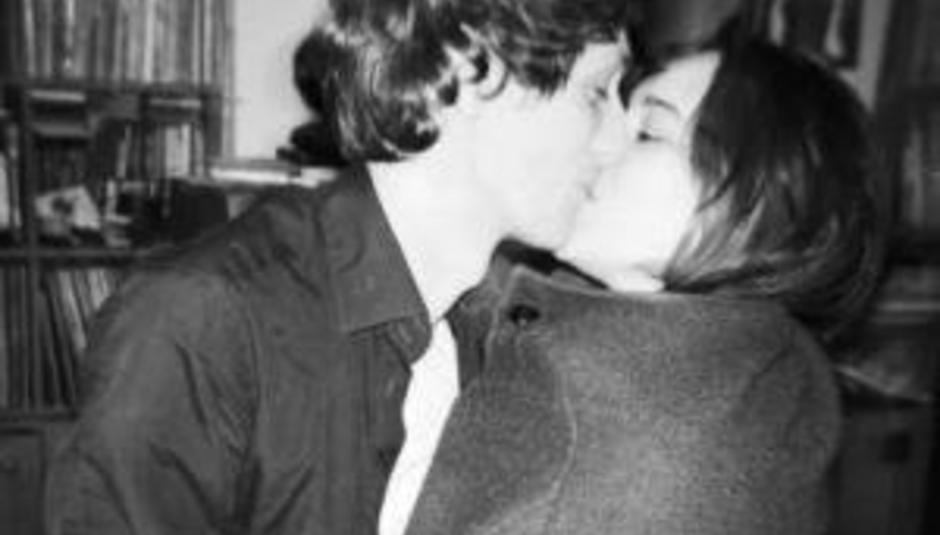 What with the brattish Gainsbourg antics of The Teenagers and the resurgence of electro house as proffered by Ed Banger and accomplices, there’s a distinctly Gallic bent to the chic indie milieu at the moment. John & Jehn are the latest reasons to give thanks to our belligerent French neighbourinos, a très-cool boy/girl duo living in London who sound like late shoegaze punks Electrelane with a pinch of Godard’s postmodern sex appeal and a cheeky dash of cabaret thrown in for good measure.

DiS stubs out its Gauloise and dons its trilby in hot pursuit of the couple...

You recently played a string of dates supporting British Sea Power – was the experience an eye-opener for you personally? Those were some big shows you were playing…
John: It was lots and lots of fun, especially because BSP are really nice people.
Jehn: They’re very impressive, a great band live. First time we saw them was in France five or six years ago, when they had trees onstage, they were already really good, so they haven’t changed.

You’ve been mistaken for Parisians in the past – where are you really from in France? And what’s it like there?
John: We’re from Angouleme and Poitiers, little towns close to Bordeaux and La Rochelle. We both had peaceful childhoods there and an interesting teenage life. But an awful adult life was waiting for us, so we left. When you live in little towns and you choose an artistic way of life, you just have to leave as soon as you can.

Why did you move to London? What are your most and least favourite things about life over here?

John: We moved for the music, to get inspiration and frustration, to put ourselves in danger. Everything happens when you’re in danger, not when you just look from a distance and wait for something. At some point we just had to say, “Let’s go to fuckin’ war”. London is a shit place to live, everyone knows that. Too much pollution, too many people, too much stupid politics, too much beer, horrible TV, horrible newspapers, shit food, horrible government, cameras everywhere… but the worst is that no-one gives a fuck! But we also made some good new friends. I see my life in the countryside one day with a stupid dog.
Jehn: Everyone is too busy to making their own money. This is a country of soft fascism; fascism that grows slowly when you sleep and it grows too slowly for you to notice. We are used to this constant surveillance. But France is not a good example anyway, not anymore.
- - -
Video: 'I Can See You'

Does the band offer a kind of therapy for you as a romantic couple? Do you think you would continue if you split? I always thought Jack and Meg White did well to carry on after their divorce…
John: It’s a step in our couple evolution. Our music and way of life explains a lot of things to us. It’s a difficult choice but a natural one, and I don’t think we would continue if we split. I’d prefer to stop the band first rather than split. Love first, music is nothing.
Jehn: In a way we’re both fighting against our dark inner selves, for the sake of love. Maybe that’s one of the reasons why a friend of us once said we were doing existential rock! Life reflecting music reflecting life…

Your new album will consist of two EPs, a ‘John’ and ‘Jehn’ EP, which you say will be something like a ‘battle’ – are you competitive people naturally? Or is it more of a symbolic battle?
John: I’m very competitive, very jealous and full of envy. But I’m not competitive with Jehn. I’d like to strangle a lot of people myself, but I’m trying to get rid of that. Like a lot of things, it’s more painful than useful but hey!
Jehn: The songs have been written separately but most of them were composed and arranged together. Half the album was recorded in our bedroom in London and, the other half, in a barn in France by our sound engineer friend Matt Farrar. We’re very proud of it. I guess you could say it’s more a conversation between John & Jehn than a battle…

What music are you enjoying right now and is it an influence on your music? Which London bands do you find exciting to watch at the minute?
Jehn: Joe Gideon & the Shark (DiScover), a great brother-and-sister two-piece on Bella Union. We almost cried the first time we saw them. Underground Railroad are bloody amazing too, a French trio living in London and really good friends of ours.
John: Duke Garwood has been a revelation to me as a guitarist too.

I dabbled in a bit of French a while back, and one thing I enjoyed was the swearing, particularly the way you could pile insults on top of each other. My favourite was “putain de bordel de merde”, because you’d never hear an English person shout “prostitute of whorehouse of brothel” in a million years. Brilliant! What are your favourite English swearwords and why?
John: So glad you mentioned that, it reminds me of my grandma. She was able to make long sentences where she’d just be swearing non-stop for two minutes, so hilarious. My favourite swearword is ‘cunt’ cause the concept doesn’t exist in French and David Shrigley made me love it.
Jehn: I like ‘twat’ because I don’t understand what it means and we don’t have equivalent in France. I like people’s face when you say it. John & Jehn’s self-titled debut will be available from April on the band’s own label, Phuckit! Records. In the meantime you can regarder le MySpace or get yourself down to one of their forthcoming live dates: