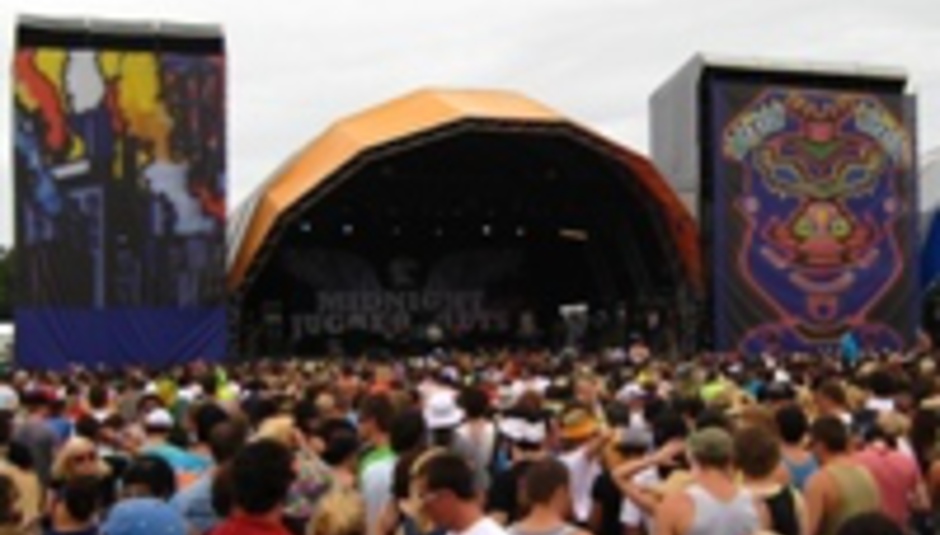 DiS does the Big Day Out

DiS does the Big Day Out

Each year Australia’s Big Day Out sells out increasingly fast; this year, the Gold Coast leg of the touring festival sold out in around three hours. The increase in the festival’s popularity over the last few years has been rapid, and along with it has come a great shift in the typical BDO-goer – these days much less the music fan and more the beer connoisseur. I’m not sure what you’d call these people in Britain, but I’m sure ‘wanker’ (bogan?) would do; let’s just say my train ride there made me aware of what I was in for (sitting next to a bunch of drunk Australian teens, all painted bodies and fluoro outfits, with not-so-brilliant senses of humour). Still, Gold Coast Parklands offers a nice environment for a festival like this: plenty of grassy knolls, the odd tree, and one pretty killer line-up of bands.

Australian electro act Midnight Juggernauts play a good set in the early afternoon, even if they’re undeniably better suited to a club environment. Their Gary Numan-like electro swagger has shot them to huge popularity, and they’ve got the goods to back it up, expressing a bed-headed aloofness while retaining a good energy for this time of day.

Dizzee Rascal fills the Boiler Room (a big tent, home to the a lot of the dance and electronic acts of the day) easily at 2pm. Armed with a DJ and another MC it’s a positively electric experience, his vocals coming in as a crisp and punctuated as ever on top of those beats – those beats! – and that bass, good grief, it sounds revolutionary coming out of these enormous speakers as he moves his way through material old and new, a couple of remixes, and a terrific version of ‘Pussyole’. It really fits the crowd and this festival, the audience of which certainly leans towards the mainstream side of things. It’s an aggressive style of hip-hop in some ways, but emphasizes fun more than anything; or at least that’s how it seems from this set. Actually, scratch that: it was just fucking badass and I want to be as cool as Dizzee.

Spoon begin soon after, over at the Essential Stage (another tent, home to a varied selection of bands). They play to a smaller crowd of a noticeably different ilk; less of the shirtless and sweaty, big-armed blokes and more skinny indie-kids, the sort who get totally stoked seeing bands like this, and Arcade Fire. Spoon’s set, while accomplished and polished, seems a little unexcited, particularly towards the end; members shuffle, suggesting they’re more comfortable as a studio band, but their performance still gives way to moments of terrific energy. ‘Don’t Make Me A Target’ packs a punch, for example. Besides, a lackluster day for Spoon certainly isn’t anything to complain about. The impression that they’re more suited to a smaller or bigger venue, instead of a middling slot in the afternoon at a festival, sticks, though.

The two main stages are right next to each other, which makes for some hilariously bad moments sitting through the bands that you’d rather go out of your way to avoid. Having to sit through the awful Australian popular rock band Grinspoon while anticipating Arcade Fire is torturous. But, of course, the wait is worth it. If Arcade Fire are this awesome every time they play then I’m pretty worried, for both their health and their instruments, especially that poor drum that Richard Reed Parry chucks around, only for the thing to be fallen over and on to. But the show goes on whatever the carnage, Win Butler getting all Buster Keaton with some theatrical clambering over the stage. Band members bang on every rafter they can get their sticks on, running around chasing each other; the best part is how astoundingly sincere and real it all seems, even at a humid late-afternoon slot.

The rush back over to the Essential Stage is worth it: on arrival Battles are just laying into ‘Atlas’, and with gusto to say the least. The song’s a certifiable epic, even before a small-ish crowd. After this highlight the band’s energy levels drop a little, falling back to some less full-on mathematical jams that don’t seem to hold attentions so well. There are certainly a few bewildered faces at those mental chipmunk vocoder vocals, but also a lot of recognition for Battles’ overall awesomeness.

A quick stroll via UNKLE’s set – which seems solid with the full band set up – and it’s over to Björk. Only in Australia can you be sitting, blessing out to such eccentric Icelandic splendour, only to have one of your smaller female friends bowled over by two drunk guys’ wrestling rugby-style blunder through the crowd. Still, we’re perched in the perfect place to sit and enjoy Björk’s set, even if it’s a little too far to enjoy the amazingly lavish costumes that her eight-piece orchestra are wearing. I’m not sure what the heck one guy with her was playing, but it may have been from outer space; little UFO-like bulbs of blue light move around, kaleidoscopic and otherworldly projected up on the big screens. Magical, as you’d expect. Halfway through, some enormous green lasers shoot out across the night sky, dancing above an hour-long set drawn from a truly impressive and incredibly diverse catalogue.

My final moments at the Big Day Out are spent at the Boiler Room once more, dancing ridiculously to LCD Soundsystem as James Murphy writhes around on the floor to ‘Yeah’ and bopping to ‘North American Scum’, backed by his band and some big-time lasers; ‘LCD Soundsystem’ is spelled out in huge digital letters all over the screens. Keeping with the nature of the music in the Boiler Room all day, Murphy marshals his band through longer, more typically dance tracks. This works out terrifically, and the indie kids and dance music enthusiasts (“who are these guys?”) are kept happy without energy ever being compromised. They’re pretty perfect for the Big Day Out: it’s music for everyone; fun, danceable, witty if you want to listen.

The Big Day Out’s spirit seems higher than in previous years as it straddles mainstream and indie with a well-balanced line-up. Additionally, this year’s crowd seem a little more focused on the bands rather than their bourbon and Coke cans. A big day out, indeed.