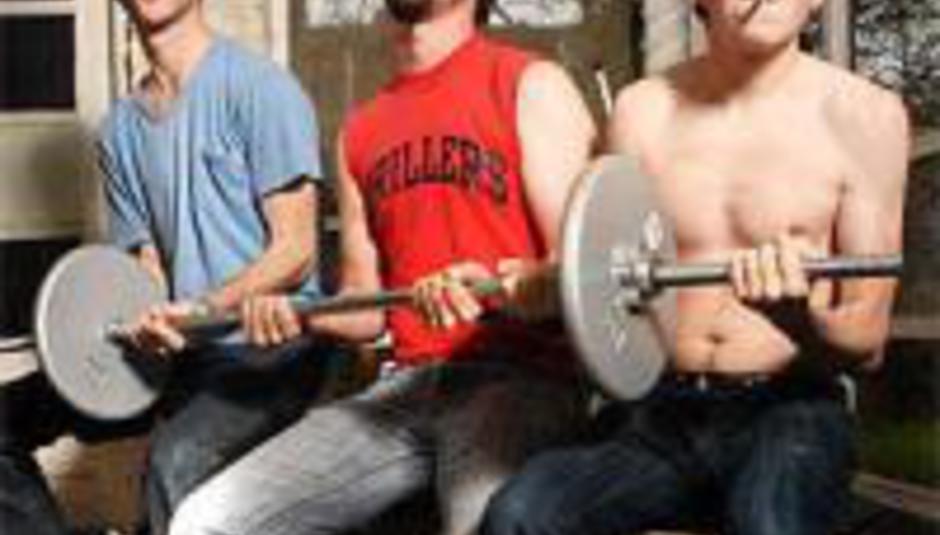 *White Denim *are a trio from Austin, Texas. They play loud, soul powered rock ’n’ roll with a fired-up punk rock energy that sounds like it could only come from the Lone Star State.

A regular staple on their hometown scene, memorable performances at South by Southwest and CMJ this past year now finds the band on the cusp of a growing success that’s already taking them far past the Austin city lines. Looking set to turn more than a few heads in ‘08, and with their rollicking debut EP Let’s Talk About It now available on iTunes, DiS fired off a few questions via the time honoured route of e-mail to discover a bit more about these Texan rockers.

*Let’s start with the basics. Who are you? *

Parque Touch (Josh, James and Lucas) played with Peach Train (Steve) at Beerland in March 2005 and Lucas said,_ "Play bass for us,"_ to Steve. A few months later he did. Then Lucas moved to Russia and we changed our name to White Denim.

*Any meaning behind your name, or are you just fans of albino denim? *

You've repeatedly been described as one of the bands to watch coming out of Austin at the moment. What's the secret to your success in a town famed for its abundance of music?

I think our secret is that we really enjoy playing our instruments and we love playing our instruments with each other. We always strive to have fun making music together and we hope that audiences can become a part of that. Whether or not people come to the concerts has never really influenced what we do. We would be making this music together with or without the attention of our 2,000 MySpace friends. We played together almost completely unnoticed for about a year and a half until SXSW 2007, now we are just incompletely noticeable.

** Are you soul-loving punks? Or are you punk-loving funkers?**

I think that we lean a little heavier on the soul side. The speed at which we play our songs and our gear make us sound like punks.

How would you describe your sound to those of us on the other side of the Atlantic?

Right now we are mostly motivational / teen. In about two months we're going to be 100 per cent Grog (Garage and Prog) rock / adult contemporary.

Who or what inspires you to make music?

*What's your idea of a perfect day? *

Waking up to the smell of bacon, biscuits and gravy and a cat. Also, my lady nuzzling me. Then having a scotch, smoking a few cigarettes, recording a jam session with a group of friends, eating some BBQ, corn bread, black eyed peas and mac ’n’ cheese, hearing something really new and mind blowing - then going over to a dark house with dream machines going on everywhere where Jim O'Rourke, Brian Eno and Stevie Wonder (just to name a few) are helping Tuxedomoon make the tastiest pizza on earth... and they've recorded a song and they ask me to put a bass line over it. And there are no cords, everything is wireless. Then Stevie Wonder is elected president and we all celebrate before going to bed by going into sensory deprivation tanks that transport us into our comfy beds.

You've only put out the one 7" so far, what can we expect from team White Denim in the near future?

We have about one thousand songs recorded (give or take), we're just trying to figure out where they're all gonna go.

Charles, is there comfort food in the UK? If yes, can you suggest? What's your favourite dish? And what four groups would you prefer to listen to while eating it - one from the ‘60s, ‘70s, ‘80s and ‘00s.

Steve Terebecki and Josh Block responded to this interview under the strict supervision of James Petralli. White Denim’s MySpace can be found here.