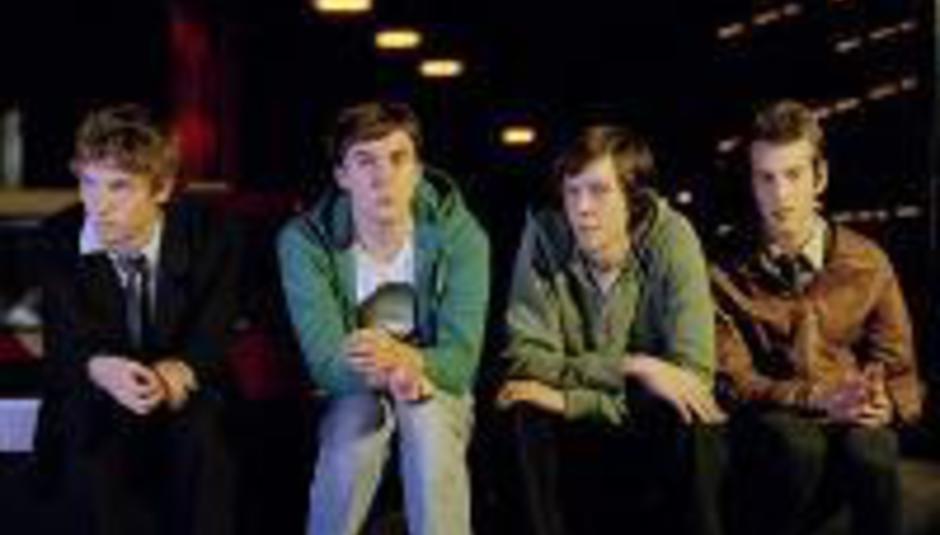 Good Shoes are a band much-liked by a number of DiS readers and writers alike; check out our review of their Think Before You Speak LP here. Reflecting this appreciation, the band’s bassist Joel Cox kindly kept a diary of the London four-piece’s November tour, which kicked off in Birmingham on November 11.

The following is what I can recall from our latest tour round the UK. First of all, our tours are getting smaller and smaller. And we seem to be playing less and less of the more undesirable bits of the United Kingdom, and bigger venues. But when you join the rest of the touring bands of the world, you employ some one else to take care of this altogether, so it has little to do with us.

Birmingham was our first date. There's some good cheeses on the rider, and we are all pleased. But really there's not much to do but be gracious and try and meet and watch our support bands. Lightspeed Champion sound good. They have a drummer tonight, who they lose for the rest of the tour, and a fantastic violinist. I think they sound a bit like Bright Eyes, but slightly more sparse and orchestrated, and less in your face. They do a great cover of ‘Heart In A Cage’ by The Strokes, and win people over in doing so.

This tour we had a proper rock and roll tour bus for the first time in England. So you can even more easily let time and space completely go out of the window as you roll from town to town in your tin can with a little coffin bed to call your own. Our driver, Liam, has an incredibly strong Glaswegian accent, so for our Argentinean tour manager he might as well be speaking Greek. It's a miracle we ever make it out of Birmingham.

We actually have a day off straight away so I'm intent on going to the Cadbury's factory, but it's shut. So I make do with going to an art gallery. I meet two people who were at the gig last night in an exhibition about the slave trade and I feel good that we have such a well-educated audience. You can also sit in on a conversation with Albert Einstein and Joseph Conrad at a dinner table. And there's a shit- hot sculpture of weird-looking people carved from tree trunks following some shaman fellow, all life size, by Ana Maria Pacheco. It was cool.

A few of us want to see what Birmingham's theatres have to offer. We find a restoration comedy and The Shaolin Kung Fu Masters. We decide on neither but as we walk away we see all twenty of the Kung Fu Masters come out the back of the theatre in full kung fu get up and pile in to a Chinese restaurant. Brilliant!

We go to the Balti Triangle for what should be an amazing curry. But I think our hunger did us no favours, and we jump into the first curry place we see, where there was no fine dining. Three of us end up vomiting at least once over the next few days and that may be our culprit.

So, we rattle along the motorway to Manchester. We pick up a crew member to sell our t-shirts. The gig goes well, it was fun. We get to know our other support band, Ida Maria, a little better by what is often the only way to become acquainted: by getting steaming drunk with them. And by playing a lot of table football. Ida Maria are Swedish/Norwegian and have very certain ideas about what English people are like. We try to prove them wrong. I talk about violins a lot. I think Steve, our guitarist, ranks as best table footballer.

And remember to always get off the tour bus quickly if you don't want to end up where you do not live.

In Leeds, the gig goes well again. The crowd take a while to warm up, but sometimes they just need a bit of encouragement. I get told to stop wearing my mum's jeans, and I just accept the cuss. Tonight, Tom our drummer plays with Lightspeed Champion and it sounds good; he really is a talented boy. I wish I could play the drums. I think we got drunk again.

Am I getting my tenses mixed up?

In Glasgow I find a postcard with 'Welcome To Scotland' printed over a picture of the desert on it. I am confused. The gig is another success I suppose. I lean in to shake someone's hand and get pulled in to the throbbing mass of people. I can't complain. We say goodbye to Lightspeed Champion over a few glasses of Buckfast.

Tour illness is setting in and I spew my guts out in a hotel car park. That's what you get for ordering a Thai green curry in a hotel restaurant called Steaks 'n' Stuff. I take a precautionary dump in the hotel bar and try to sleep till Middlesbrough. These are the practicalities of touring in a tour bus, it seems.

Better take it easy in Middlesbrough. There is badness inside me. Through our blacked-out windows our crew watch a woman being fondled intimately on the pavement, surrounded by grinning onlookers. We lose a wing mirror and our engine is tampered with. They can be animals on a Saturday night.

Operator Please have pulled out of a couple of dates so my favourite band steps in, THE MULES. You should definitely check them out at MySpace. They also have a violinist. All good bands should have a violinist it seems. It's a pleasure once again. We head out in to town to the bizarre place that is called Niche Bar. It is open ‘til 6am on a Sunday night, and complete with karaoke it is all you could possibly need. The Mules have people scratching their heads with a Fairport Convention song. Jay, our t-shirt seller, and I knock everyone dead with ‘I Want To Break Free’ by Queen. It is a shame The Mules didn't get a chance to reply, but looks like we won.

Oh, and they didn't let Steve in and the karaoke guy was a real dry-out so we won't be going back there again.

Next, Norwich. Our t-shirt seller comes back from a club with a giant bite mark on his shoulder. Apparently Ida Maria does this a lot to people.

Brighton is almost like a second home to Steve and Rhys so it's always good to play there. We arrive and they're doing auditions for the local music school. And fucking hell if all you have to do to get in to Brighton music school is pretend to be Incubus... God help us. The best thing in Brighton is Bill's Cafe! It's the most amazing place to get a crazy gourmet breakfast. Avocado, poached eggs, humus, sweet chilli sauce: it sounds nuts but it's the best breakfast I've ever had.

The gig was boiling hot, but another good one. We have some fun down by the sea to cool off.

We say goodbye to our tour bus in London and head to the Astoria. It's a big deal playing there really, and we all have a good time. The champagne goes to my head and then I wake up in a real, soft, stationary bed.

Good Shoes’ Think Before You Speak is out now on Brille; their latest single, ‘Small Town Girl’, is out now and reviewed here. MySpace? Here. Live dates: