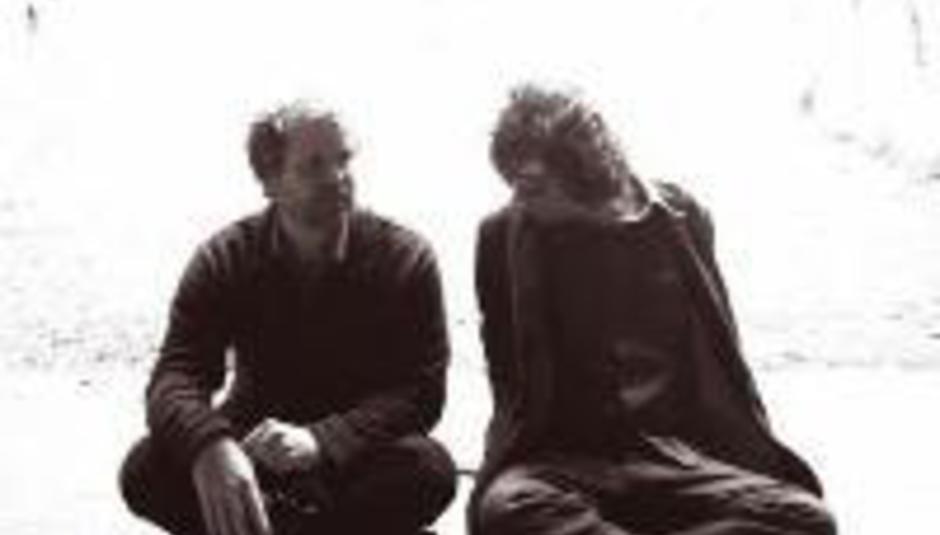 San Francisco-based two-piece Seventeen Evergreen are masters of the sci-fi ethereal, mood-sculpting in a manner most organic. Comparisons to Mercury Rev, Grandaddy and Lee Hazelwood have been made and stuck, after a fashion; they’re certainly of a comparable quality. The pair – Caleb Pate and Nephi Evans – released their acclaimed debut album in the UK earlier this year via Lucky Number. Life Embarrasses Me On Planet Earth is reviewed here.

As they arrive in Europe for some rare live appearances, including a date tonight at London’s Luminaire (their only British show on this trip), DiS catches up with Pate and Evans to DiScover Seventeen Evergreen.

Life Embarrasses Me On Planet Earth has the feeling of a slow-burner about it; the kind of LP that will reveal itself fully over timely and considered listens. Given that its critical reception – positive – doesn't wholly reflect the band's current profile – rising, but not yet buzzing – are you of the opinion that it's a proverbial 'grower'?
P: Due to the overcrowded musical landscape, I think all records are growers these days, especially the best records. My favourite records have always been of this variety. Immediate doesn't always mean best. Please let me know after hearing the record 38 times if you agree with this. The hard part of this equation is the blip culture / attention span / digital bulkus enormous / too many bands on the planet society we live in. Technology and the awareness that it affords are both positive and negative in equal parts. Hooray!

With so much pressure heaped atop the debut record of any band these days – there's not so much flexibility for failure in today's narrowing marketplace – are you confident in attracting as much coverage around your second album, or more, even?
P: Recordings are building blocks of momentum and awareness and successive records two and three, et cetera, will always gain more attention, even if they are lower quality, which isn't a possibility in this group.

Is Life… a great foundation from which to build, or should album two be a giant sidestep?
P: Musical departures are always a possibility for restless types like us, we'll see and you shall see. Out of the 40+ songs we are considering for the next album, they run the gamut of places we've been musically and places we haven't been. It will undeniably sound like us.

Comparisons have been many and varied, and all positive, but can comparisons to acts like Lee Hazelwood and Mercury Rev actually hinder a new band's ascent, as everyone's a critic these days and can read 'tween the lines enough to know most acts compared favourably to a good act past probably aren’t of a similar quality…?
P: All artists, no matter how classic they are perceived when they cease to exist, had these origins in press awareness. Comparisons = easy marketing. Our label has been very surprised by some of the lazy comparisons associated with us, while not necessarily seeing or hearing what they did when first hearing us. This isn't the end of the world, because most of the comparisons have been bands that we like or don't mind, but not usually influences or anything we listen to frequently. Without a box to fit in, who would listen? People like what is familiar. Can it hinder us? Yes, perhaps... If a band reads too much into it and grows more similar to whom they've been compared to. This could only pose a problem if a band gives too much weight to the comparisons and either reacts against it or grows more similar to those bands in order to garner more attention. There's also the possibility that a potential fan could me misled and just say, “Oh, I think one Strokes is enough, thank you very much, next”. These thoughts don't dominate our dreams, that's for sure.

Then again, the continuing success of the Rev, and new success of Midlake, must make you more confident of appealing to a wide audience? Music like yours isn't 'difficult'; it's the kind of indie-pop that creeps in slow, but does ultimately infect you quite wonderfully. Can you feel its commercial appeal from your perspective, or are you too close to the material to be able to judge such things?
P: We believe that our pieces have lives of their own, to a point, with some deliberate interaction and guidance. Some of our pieces don't have the DNA for mass appeal and some do. We are comfortable with that and realise it's more about exposure. We may embrace the difficult at times, but 'difficult' bands these days have also found and secured huge audiences, so perhaps this concern is becoming a thing of the past. There seems to be an audience for everything if they can be found. Being close to the music, you may not always know which of your compositions could have this appeal and you may not be your own most beneficial critic, that's why the keen ears of collaborators/editors can be golden and their opinions can be heeded or ignored… Freedom!

Why 'Music Is The Wine', out on October 15, as a standalone EP?
P: It's the third single taken from the album and I believe that's how they are generally released over here in the UK, alongside b-sides and remixes.

Do you feel it's suitably representative of the LP, or does it possess some other quality that sets it apart from the pack for you?
P: This song stands a bit on its own from the record, but works well as track one; every song on the record can stand on its own, if need be. Variety is spicy, no?

Remixes – is it easy for you to let loose of something you made, for someone else to re-work?
E: No, it's not easy to let loose of something that we've created for someone else to rework. But we've been pleasantly surprised by different ideas that remixers have come up with while working with our tracks. for example, I absolutely love the Corker Conboy remix, with a string arrangement by John Mathias. He worked on Radiohead's The Bends.
P: I love to see what remixers will feel when reinterpreting our pieces and have no trouble letting go of these tracks to go play in someone else's lab. If I don't like it, I would hesitate to put the band's name on it, however. But, the great variety of remixes have been fantastic… everything from dubstep remixes by bi-polar, space disco remixes from Joakim and a stellar strings-heavy version of our album closer ‘Andromedan Dream..’ as Nephi mentioned. And a moog-y reworking by Roger O'Donnell, these have all been exciting. There are some more in the works that are also very good.

Just how do you go about 'pitching' a band like Seventeen Evergreen? Are you folk? Indie? Experimental electronica-inflected pop?
P: Yes, all these things and others as well. This can be infuriating, but fortunately this job lies with marketers and journalists who can help out in this regard. These boxes of category don't always apply, but can be helpful for searchers who know they like ‘indie-rock’ or ‘experimental’, or whatever the case may be. But, then are they disappointed by the metal part in the jazz odyssey? Ha ha... This is where categorisation fails.

Do you pay much attention to pigeonholes people place musicians within?
P: Nope.

What's next, after these European dates? Any proper UK tour planned?
P: We are recording the second album, which will come soon, working on new material, having some rest, remixing some of our own tracks. We are playing our first London headline show at the Luminaire on September 25.

Finally (wrong way around, this): run through how you came to work together, and when…
P: Nephi and I have been playing together for quite a few years, but 2001 was the beginning of this phase of Seventeen Evergreen. We hatched a plan while I was living in London and Nephi had been travelling around the world. The plan was to go back to San Francisco and finish music, put together a live band, assemble our studio, finish our album and stay put for long enough to make these things happen. Now here we are, touring the world, yes!

Seventeen Evergreen’s Life Embarrasses Me On Planet Earth is out now, with the EP ‘Music Is The Wine’ scheduled for release on October 15. The pair play London’s Luminaire tonight (September 25), with future tour dates available as and when at their MySpace page, here.

Add the Sept 25 show to your gig calendar here. Tickets are £7 on the door, with support from Kyte and Hush Arbours.