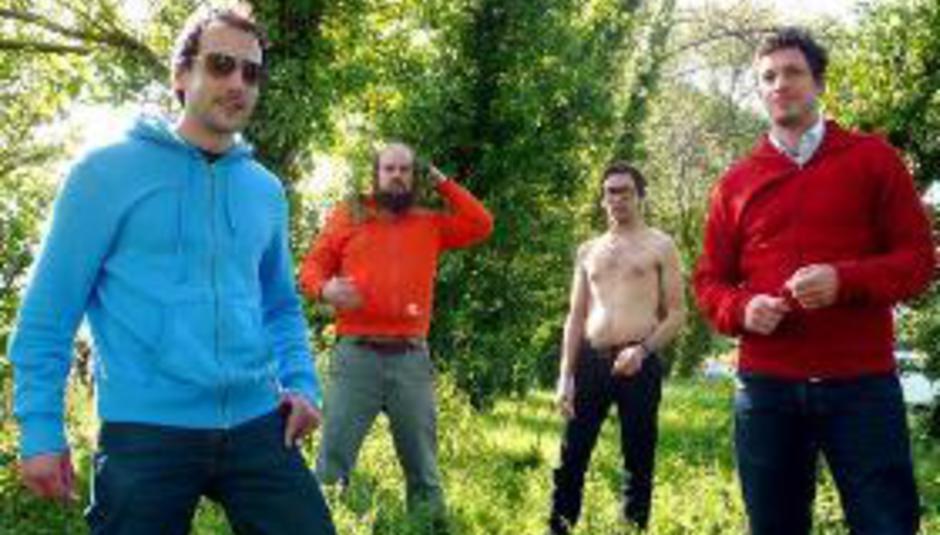 Back once again come the renegade masters, punk-rocking party-starters supreme, ready to kick out the jams afresh. New material? You got it: Les Savy Fav’s Let’s Stay Friends might just be the Brooklyn-spawned quartet’s finest long-player yet.

The band – that’s Tim Harrington (vocals), Syd Butler (bass; Syd also runs the band’s own Frenchkiss Records), Seth Jabour (guitar) and Harrison Haynes (drums) – recently signed on the line with UK indie of choice Wichita; the London-based label will give Let’s Stay Friends an official domestic release on October 10. With a live reputation to die for, the band also visit the UK for a couple of DiS-sponsored shows in Manchester and London; details at article’s end.

Let’s Stay Friends is Les Savy Fav’s first studio LP since 2001’s Go Forth (number 28 on last year’s Our 66 countdown, link); a singles compilation, Inches, was released in 2004 to great acclaim (review). It collected all of their singles from 1995, the year the band formed, through to 2004.

Ahead of the release of Let’s Stay Friends and their double dates on UK shores, DiS caught up with the band’s Syd Butler…

Let’s Stay Friends feels like an awfully long time coming. While this is probably the first thing you’re asked in every interview, it nevertheless requires asking: what have you been doing between the collection that was Inches and the new LP?
We are not a career band, and we have plenty of other interests beside making music. After Go Forth we wanted to explore those interests – we didn’t want to reach 45 and look in the mirror and say, “That’s it?”, so we went to work.

So real life took priority, with music coming second?
Yes. Tim started a textiles company called Deadly Squire, Harrison started a gallery called Branch, I focused on Frenchkiss and Seth continued to work as an art director and illustrator. Music is very important to us, but not the only interest.

On the touring front, your reputation rather precedes you – is that ever an obstacle to the band? Do you feel that you always have to ‘deliver’, as it were, and can off nights really bum you out as a result?
Every show is unique and therefore has its own identity. We love playing live, and feed off the audience. If it's one person or three thousand, there is always energy in the room.

Is it hard keeping it unreal on stage, though, when you’re in a mood to just kick back, eat pizza and watch TV…
There are many nights when eating pizza and playing video games sounds like the perfect night, but then you start playing and energy is created. I wouldn't want to be anywhere else. We can always play video games and eat pizza after, too.

Is it important to keep one aspect of the band, the live performance, separate from the recording side? The new album is very polished, perhaps more so than any preceding album, yet the live shows can be… chaotic? Are fans ever disappointed by albums after seeing you live, do you think?
We play shows to surprise ourselves, and we have no control over the audience. We hope they are having a blast because we are. I think this recording shares similarities with our live shows. Our shows can be chaotic and exciting and so was the process of recording Let's Stay Friends. It was like a roller coaster: big ups and downs, jostling, but we were strapped in.

Let’s Stay Friends finds the core four collaborating with a few guest vocalists, such as Fiery Furnaces’ Eleanor Friedberger. Why bring other individuals into the equation this time out, and do you think the occasionally dominating female vocals lend the new album a degree of, I dunno, accessibility that perhaps past albums lacked?
Our friends definitely brought a new energy and approach to these songs. The more input and time we all put into recording, the more growth we saw. As far as accessibility goes, people see different records in a unique way. Toko (Yasuda, of Enon – all members of Enon contribute to the LP in some way, as do Emily Haines, Andrew Reuland, Modest Mouse’s Joe Plummer, Fred Armisen and Islands’ Nicholas Thorburn) and Eleanor did wonderfully on these songs, and accessibility was not one of our motives for collaboration. If female vocals draw a connection with more people, then that is fantastic.

Are you surprised, at all, at how Inches is often cited as your fans’ favourite ‘album’? As a singles compilation, do you hear it as a cohesive record at all, or does it sound purposefully fractured?
I'm glad people like Inches, it is a favourite. The album is cohesive to us, not just because they are all our songs, but they create a sort of historical map, exposing the underlying apparatus. Part of this was conscious, part of it wasn't.

With such strong singles obviously under your belts, are you surprised at all that mainstream radio hasn’t picked up on LSF all that much?
We do get some radio play and are thankful for this, but we don't write for radio.

You’re in the UK for a couple of shows in October – while these are anticipated, there’s a slight disappointment that you’re not doing more…
We're happy to play these shows. In regards to future touring: it's more about quality then quantity.

How do you enjoy playing the UK, generally?
We love the UK, the fans are bloody brilliant. Everyone wants to have a party.

Now you’ve a UK base, too, with Wichita. What led you to the label, after so long without a proper UK base, and are you pleased that they’re obviously such fans of the band?
We are thrilled to be with Wichita. If people – especially our fans – are as excited as we are, it will lead to bigger and better things for sure.

Les Savy Fav’s Let’s Stay Friends is released through Wichita on October 10; a single, ‘What Would Wolves Do?’ is released on September 24. The band’s MySpace is here, and live dates are as follows: