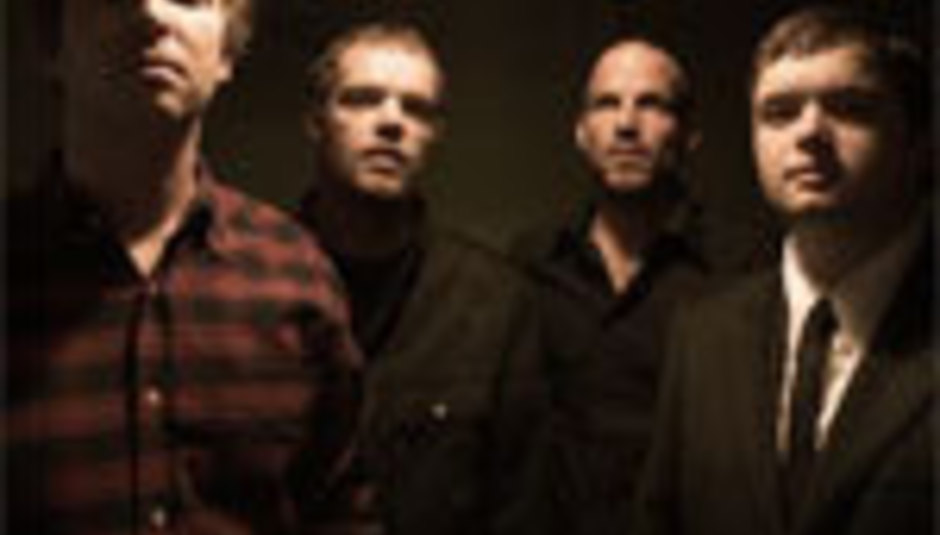 With last year's excellent The Beatific Visions Brighton's Brakes confirmed their status as the anti-supergroup – taut, concise and brimming with ideas where genre convention dictates that bloated jams and over-inflated egos are the order of the day.

Their schizophrenic, irreverent approach to playing has proved something of a double-edged sword, drawing praise for their unpretentious intelligence but also compounding prejudices about the band being a lowly side project, prompting snide remarks even in the normally blithely uncritical Metro about their alleged status as a 'student in-joke'.

It's an issue frontman Eamon Hamilton has a tough time dealing with.

"I don’t know what an in-joke would entail really," he says. "We just enjoy it and if you enjoy something it comes naturally. I think Art Brut had the same trouble where they made really good music and people thought they were a piss-take but then they became massive in America in Germany so…"

It's not all bad, though. Hamilton reckons most people came around to the idea of Brakes as a serious proposition by the time of their second album.

"I dunno, it's like I read the hyperbole round Reverend And The Makers and listened to the lyrics and couldn't really equate the two. But then you listen to someone like Jeffrey Lewis who has the most incredible lyrics I've heard in years and doesn't hype himself up at all."

I suppose he wouldn't be Jeffrey Lewis if he did, but you get his point. Hamilton is self-effacing and thoughtful in a British musical climate that sets no great store on either. Where does this mass ego-trip come from exactly?

"I think Oasis have a lot to answer for with that," ventures Hamilton. "I mean, it's brilliant with Oasis. They're two of the funniest dudes you could ever hope to meet, but they're just one band and I don’t think everyone should copy that whole 'we're the fucking best' thing. There’s a beauty in modesty. Let people make their own minds up about your music. Having said that, Brakes are the most amazing band…"

In today's era of pervasive pop-cultural vapidity 'long' regularly gets confused with 'epic', word count with intelligence, and it's entirely conceivable that Brakes' admirable brevity could be another reason people might choose to see them as a fine if rather inconsequential diversion. Is there any reason their songs come out so short?

"I'm only five foot seven-and-a-half so maybe that's got something to do with it," Hamilton jokes. "We've got a song called 'Comma Comma Comma Full Stop', and that came from reading haikus really and trying to… you know, where they're able to say something in a really short space of time, something with meaning.

"I thought of distilling that into a one-sentence song and then I thought, nah, let's distil it further into just punctuation and it's one of my favourite songs we do, really. You think about the title, it's almost like a life… different periods broken into punctuation, and then you die." He laughs, before adding matter-of-factly: "It's not flippant in any way, it's just a distillation of a writing process."

Sometimes you listen to bands who rattle through ideas in these one or two-minute songs – Guided By Voices, Minutemen or whoever – and you're left thinking, 'That was a great idea, I wish they'd just run with it'. Does Hamilton ever get to thinking the same thing?

"Yeah, we've covered Camper Van Beethoven. They did really short songs as well. I'd agree with that. Some of the songs we've written, say 'The Most Fun' from the first album, I wish they had gone on a bit more, exploded in some way, but you can’t turn back history…"

That notion of compressing your meaning into short, sharp bursts – is that something that appeals to Hamilton?

"Yeah, especially if there's something I'm angry about. I don’t like to dwell on anger particularly so it's best just to let it out. Say with 'Pick Up The Train', which is about the middle east: I was just so pissed off with it at the time 'cause there was very little communication between people. I didn't want to dwell on it or be all like, 'Yeah we can change the world with one song'; I just wanted to comment on my own anger at the situation.”

There is that political edge to a few of the band's songs – do you feel like it would be shirking your duties as an artist not singing about those things?

"I'm not sure about that, as some art is beautiful in its escapism, you know? Where you can escape into emotion, I'd like to write songs that do that as well… Sometimes the world's a bit shit and a good song can make it a bit better. I've got this conflicting thing where I want to comment on the world but I also want to escape from the world. So with the third album, hopefully, I'll have resolved all my internal issues!"

It’s early days for Brakes to be thinking about a third album, but Hamilton is animated on the subject nonetheless, discussing what directions a new record might possibly take.

"I'd like an album that flows, rather than have like peaks and troughs, just have it more… hilly."

"Yeah, yeah, rolling hills… I'm really getting into shoegaze at the moment; it seems to be having a bit of a resurgence. I dunno, sometimes I'd like to write a kind of harsh album and others I think I'd like to do a dream-pop album. Brakes is fantastic because if an idea works then we'll just go with it.”

The band recently embarked on a month-long tour of the US which Hamilton says they enjoyed immensely, particularly when fans picked up on some of their more political numbers.

"Everywhere we went the Cheney song went down amazingly, they were loving it," he opines. "I think most of the country is pissed off with its leaders. You get a bit of a skewed idea of America if you look at them, it's actually an amazing place, really intelligent and self-critical, it's always worried about what America is.

“It’s such a young country and it's always changing, and every generation can make its own stamp on it. I think America's a fascinating place."

It seems like they're always struggling with some sort of identity crisis over there.

"Yeah, well it always has, that’s what the Great American Novel's about, trying to find that identity. From Huckleberry Finn to Tom Wolfe and Hunter S Thompson and nowadays… Actually, I'm not sure who’s writing it nowadays. Maybe A M Homes, This Book Will Save Your Life."

The literary references don't end there, either: there's a vein of religious imagery running through Brakes' music which recalls Frank Black of the band's illustrious forebears Pixies – 'Cease And Desist', in particular, takes inspiration from the Book of Job.

"I read the Old Testament around the time I was reading (Mikhail Bulgakov's much-admired novel which Brakes adapted for their own 'Margarita') Master And Margarita. I quite liked the God in Job 'cause he was just a killer, y'know? He comes down and tests this guy and makes a deal with the devil, and says, 'Let's screw this guy's life up, ha-ha-ha'. So I thought I'd write it again, but let Satan win."

It's like when he tells Abraham to sacrifice his son, you can rationalise anything with that…

"Well that's it, so much of religion seems about rationalising mentalness. I dunno, I’m not a big fan of religion. Well I mean, I can see that it does a lot of good in some places, but it also does so much harm, it's difficult to justify…"

He breaks off, suddenly aware of the van parked outside in which his bandmates are gesturing him to leave.

I ask him if there’s anyone he’s looking forward to watching at Reading Festival which the group are playing over the weekend, and he mentions being excited about catching Interpol play. Was he aware of Carlos D’s illness which had forced the band to cancel one of the shows on their UK tour recently?

"The Dingle Dongle Dengler? I didn't know… actually don't put that, every time I see him I go, 'Ahhh Dengler', and he’s like (adopts inexplicable Woody Allen accent), 'You're the only guy I allow to call me that!'"

From organised religion to vaguely smutty-sounding nicknames in the bat of an eyelid… yeah, Brakes are a bit special, alright.

'The Beatific Visions' is the third single to be taken from Brakes' album of the same name and is available now through Rough Trade. Brakes will be touring the UK this autumn. More information / dates available on MySpace.