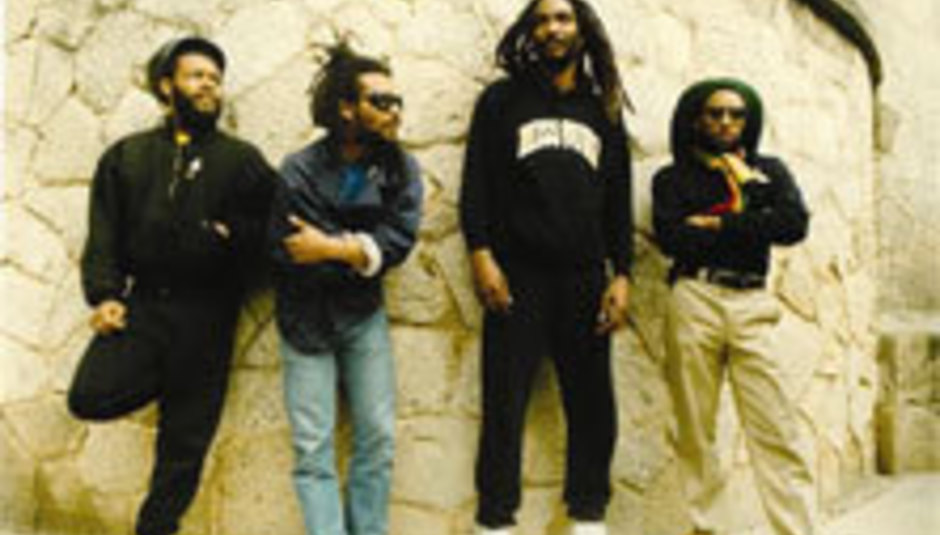 There once was a time when punk music was, like y’know… good. Not that we’re knocking bands like Good Charlotte or +44, they make good pop music. But to call them ‘punks’ is kinda like using a banana painted black in a robbery; it might look similar, but just ain’t the real thing even though it might be treated as such. But with bands like Gallows, The Bronx, Fucked Up and others emerging seemingly out of nowhere, it seems the flames of punk rock are being reignited, taking inspiration off the American HxC scene of yore.

Born in the late ‘70s and early ‘80s, many would argue that hardcore is the true spirit of punk. After all the poseurs and fashionistas fucked off to the next trend of skinny pink ties with New Romantic haircuts, singing wimpy lyrics (‘My Sharona’… WTF?), it left the punk equivalent of the Waffen SS; a group of people completely dedicated to the DIY ethics. Lifers without the ambition to one day settle into the study-work-family-house-retirement-death scenario. There were several heavy hitters of the time, but only one real leader. Black Flag may have had the songs, Minor Threat the conviction, Circle Jerks the humour, but it was always Bad Brains who were the best; the most technically gifted, the most forward thinking and the most ambitious.

Let’s start back at the beginning. It’s 1979 and in the poor neighbourhoods of Washington DC, four friends – gifted musicians – discover the music of the Ramones, The Stooges, The Pistols, The Dead Boys and others. Bad Brains was formed, but where other punkers had been limited by skill, the Brains were technically proficient musos with a history of progressive jazz. In other words, they could fucking shred, dude. Within weeks they were the kings of the scene and people flocked to their shows, partly out of novelty. “Have you heard this band Bad Brains,’ kids would say. “Apparently they’re all black dudes!” - something completely unprecedented in punk.

“I never really noticed that I was the only black guy in a club,” says bassist Daryl Jennifer retrospectively when I call him at his East Coast home. “I just knew I was a youth inspired to be a punk like my brethren Ian MacKaye [of Minor Threat / Fugazi]. We was colour blind.”

As punters flocked to see what was then a novelty, they were immediately won over by one of the band’s incendiary live shows. Singer HR was a man possessed, doing backflips on stage and generally kicking ass full stop. But by the early ‘80s, the band had added to their patented sound of hardcore by including reggae in the mix. They had undergone a spiritual awakening in discovering Rastafari after a Bob Marley concert and had integrated its parallel soundtrack.

“That’s correct from a superficial sensationalist point, but when you really look at it we were always Rastafari, being born of Africa,” says Daryl in a constantly animated voice. “Being Rastafari isn’t a religion - it’s a way of life. So you could say that concert helped us recognise our roots, but you can’t join Rastafari. It is not a club or a church even. My belief is in one life and one great spirit.”

When you started doing reggae did you feel it a battle between the hardcore which you obviously loved and the reggae which presumably had spiritual significance?
“Well you see reggae and hardcore is the same music to us. It is rebel music. Reggae music has more of a spiritual component, but it’s like thunder and lightning. All take on different sonic forms. Hardcore is fast and technical, and then we drop the rub-a-dub - different spectrum; slow and eminent. It’s all positive work; PMA and this spirit at work through different levels of sonic.”

Following a move to NYC after notoriously being banned in DC and a decade destroying stages across the US as the world’s best live band, internal tensions were starting to destroy them. Singer HR would often refuse to perform, eventually splitting the band down the middle, leaving with his drumming brother Earl to dedicate more time to reggae. Line-up changes, sporadic reunions and the odd album ensued, but the band was never really the same… until now.

Recently signing to Megaforce Records (the label that brought you the likes of Metallica, Anthrax and recently Ministry), a new album – Build A Nation – is dropped earlier this summer. It mixes the classic hardcore we’ve come to love, with vintage reggae and the new addition of dub.

“We’re like brothers from a long time ago,” Earl laughs slightly. “From before we even had a band and were playing all this rock shit. Our brotherhood goes a little deeper than our musical relationship. We’re brothers from another and deeper perspective than Bad Brains.

“For us to get back together we’re just living and we are together. We’re not like other bands in the respect where we got together through ads. We were boys and brethren before Bad Brains. It’s deep. We’re just the Brains… we live together in one life.”

Has your friendship ever been affected because of the music?
“Nah, that’s what I’m sayin’. We all little to big brothers. Just like a family; we may have dysfunction where one brother may not agree. For the whole the brotherhood is never affected, it’s from the heart and the great spirit. It’s a deeper relationship we have as brethren. You can say it seems we have ups and downs, but that’s just how it is with Bad Brains. It’s a living band not a musical entertainment group. It is living and we’re coming up with fresh ideas to lead with a positive music.”

Produced by Adam ‘MCA’ Yauch of Beastie Boys, it’s the first real album recorded by the band in 12 years. “The Brains are one of most powerful and unique bands in the world. They have been a huge influence on me, and it was an honour to work with them on this record,” said Adam after the completion of the album.

“Well y’know me and Adam have had a few things on and off through the years in different bands,” says Daryl. “We always kept in contact, so it came as a coincidence that at the same time all the boys were thinking about getting together to write riffs and new tracks, that Adam gave me a call and he was like, ‘Yo yo, let me produce that record. I know how y’all supposed to sound’. It wasn’t a professional thing… you know how friends are. I was like, ‘You wanna give it a shot? You got the paper to handle us?’ It was cool.”

Throughout the course of our conversation, it’s clear that Daryl is very much on a different plain of reality. Not like renowned egocentric fucktards Billy Corgan or Madonna – not on a superficial level – more on his approach and outlook to life. His words are littered with spiritual references to the ‘great spirit’ and PMA, or Postive Mental Attitude – something the band have always pushed. This is a band for the people by ordinary, but enlightened people.

The brood of his thick East Coast accent – in this day and age – would stereotypically seem more appropriately spoken from the likes of a Fiddy or Jay-Z, not someone pushing a peaceful message in often aggressive music. It could be so easy to hear the music of Bad Brains and simply presume it is all anger and hatred, but there is so much more depth and affirmative outlook.

“When you say you want to bring peace to the universe, people say, ‘What type of hippie shit is that’. When you say the words peace and love, it should have as much depth and meaning to it as when you say murder and kill. But they bring more attraction and money than when you say peace and love. We’re just trying to send the message of peace and love, PMA, everything’s gonna be alright as Bob Marley said. It’s not being complacent, but to put faith in good that’s all you can do… be positive.”

The importance of the Brains – the holy grail of punk rock – can’t be overstated. This is a band that deserves your utmost and immediate attention, not least for their legacy, but also for the fact that the music they are now creating is equally as good. Dig up their back-catalogue and check out their album, it is a poisonous slice of hardcore brilliance.