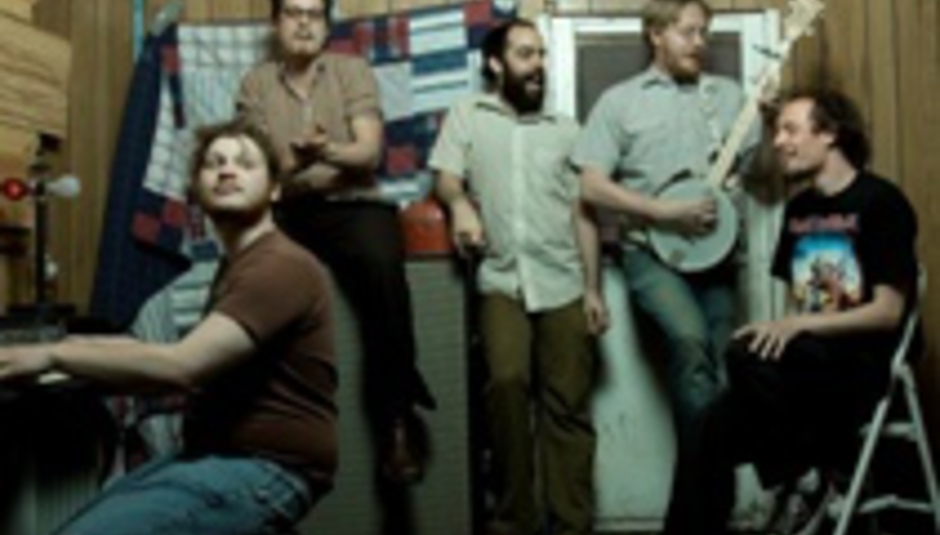 One of DiS’s favourite bands from this year’s boozefest that is the South by Southwest conference, O’Death recently hit the UK for a storming set of dates with new label mates Menomena.

Their second album, Head Home, is out next week (August 6; review here) on the venerable City Slang label and has garnered much praise. We caught up with the country-punkin’ bluegrass hell-raisers to exchange some views on Brooklyn, Pixies and playing with bands that sound nothing like you…

Hi O'Death, how was your first visit to the UK? Did it treat you well?
Our first-ever trip overseas was an exceptional experience. Playing to a new crowd is always exciting, and being so far from home gave each show an extra level of relevance to us. We only did a couple shows in the UK proper, but the London show in particular was fucking awesome. Eventually people loosen up and lose their shit along with us.

You also played over here with your new label mates, Menomena. How was that? Good times?
We did about three shows on this tour with Menomena: in London, Berlin and Paris. Each of these shows was really great. Menomena are a very talented band and extremely nice guys. Their music is very different from ours and I hope, though am not completely sure, that fans of theirs would like what we do, too. O'Death always has a hard time making new musician friends, even though I think we're nice people. I hope Menomena had fun with us.

We just touched on the label – you recently signed to an ace label in City Slang. How did that come about?
A man named Brian Long, who is now our manager but wasn't then, had sent a copy of the album to Christoff at City Slang. He responded well enough to it that he flew out to catch one of our shows in NYC. He liked that show so much he signed us to his label. We are extremely fortunate to be in such great company. The calibre of artists City Slang pursues is very high and we're all ecstatic that we can be among them.

To be frank, you're an unlikely looking band (What? – Ed); has your recent success taken you by surprise?
Well we don’t look like rock stars, and really aren’t very attractive for the most part, so yeah, I’m surprised anyone would take the time to print a picture of us. I think in the punk tradition, the music industry needs to see something and hear something that is in some ways less-polished than the dominant product and, at the very least, we provide that. Our goal has always been to write good songs and be generally true to our musical and aesthetic ideas, so it’s gratifying that anyone takes notice at all. We also sweat too much and I’m losing my hair. And I have a beer gut.

Based on your music, a lot of people might assume you come from a chicken shack in the Deep South; however, you're based in Brooklyn. How the hell did that happen?
Our music comes very specifically from the places we are in, so I would never want to place our sound with a certain region of America. I’ve spent basically my whole life in New York, so it’s hard to say. The band likes music from all around the world, but mainly forms of early raw music, and much of that did come from places other than contemporary Brooklyn. It’s hard to say why it happened exactly, other than that we wouldn't possibly be playing any other kind of sounding music as this group. We all need this sound, and hear it in our heads. We all believe in what we're doing and can't possibly trade these particular musical ideas for something more fitting of our immediate location.

DiS first saw you at this year's SxSW. It was pretty crazy, and a lot of people were talking about you. Do you think that SxSW helped 'break' you as a band? Or were things in the works beforehand?
SxSW was a lot of fun for us. It’s such a constant process to see what hits for people and you never know who's seeing you, and when. At the very least SxSW was the place where we signed the record contracts, though obviously both were in deep discussion for a while before signing the papers in Texas. We had a great time down there, though it was our momentum as a band the year leading up to SxSW that got us there. I think our greatest breakthroughs definitely came beforehand, but again, you never know who's seeing you when.

At that show, we saw you cover Pixies (‘Nimrod's Son’) – are they an influence? Or is that a song that you just think fits what you do particularly well?
The Pixies are a fairly strong influence on us. Specifically we're impressed with the way they structure songs and the way the parts in the songs respond to each other. They’re an energetic band with an unconventional muse and that’s always exciting to see. They may have been one of the bands that made me, in particular, want to play music with other people, as the roles they play fit so excitingly into each other. So yeah, they're an influence beyond ‘Nimrod's Son’.

Your live shows are quite insane – there seems to be an intensity or anger there. Where does that come from?
For everyone involved in the band it’s really all about channelling energy, and a lot of the time it seems like anger or it comes out as anger, but really it’s about energy and catharsis. We sometimes seem scary without meaning to, just ‘cause we feel so possessed up there. Possessed by good and bad feelings.

Are you all working regular jobs still? Or have the lure of fame and fortune led you to shunning the working life?
Everyone in the band works some sort of job outside of the band. Gabe (guitar, backing vocals, etc) has a rather lucrative side career as a freelance video editor, for example. It would be amazing if we could get to the point where we could just play music all the time, but really we're not very successful that level yet.

Within what's going on in popular music you stand out like a sore thumb - probably a good place to be. Do you feel like that? Do you have any peers or people you admire?
I’ve always felt like I stand out like a sore thumb. It’s impossible for this particular group of people to make music and go along with trends in popular music. I don’t think we'd be capable of pulling that sort of thing off. There are plenty of bands I admire, but it’s hard to call someone like Will Oldham or Nick Cave a peer. Of people we actually play with, I think we were all pretty blown away by Dirty Projectors the couple times we got to play with them, but it’s very hard for us to find any bands that work in a similar vein as us, which is both refreshing and somewhat difficult. I don’t even know if we'd like a band that played similar music. I think we all pretty much flock to the unconventional without always meaning to.

Head Home is out on August 6 via City Slang. For more information on all things O’Death, click to their MySpace page here. At present, no future UK shows are confirmed. Watch this space…