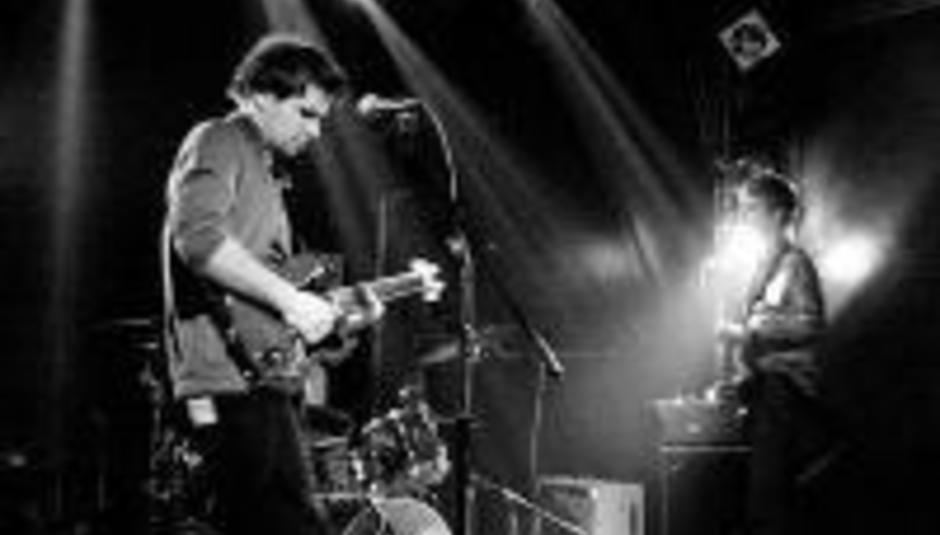 Favours For Sailors are a three-piece from London. You could call their songs pop, or rock, or a combination of the two; you could dance to it, or simply tap a foot; you could, even, go so far as to say they were pretty good. DiS feels that way, which is exactly why we invited them along to May's DiScover Club show, on Saturday May 5.

The band breaks down into the following constituent parts: Jon (JRC) plays guitar and sings, Alex (AKB) plays bass and also sings, and Metin (MA) drums. He probably sings a bit, too.

The above men will perform, before some other men of music, at Notting Hill Arts Club on May 5; beside them, Meet Me In St Louis and Chow Chow. Details? Click here, oh brave explorer of new sounds. Do come on down and see them. They are good. We wouldn't lie to you.

Likewise, nor would the band themselves…

How did the band come together, and what were members doing, musically, beforehand? Are there bands in your past? You sound so very accomplished already that I can’t imagine Favours being its members’ first band…
JRC: We have all been in lots of bands, some good, some bad I'm sure. We've played together for a long time (with a few years off), so know what we're doing to each other. We enjoyed our time in a band called East Of England, whose name ripped off a Will Oldham song title. Occasionally, snippets of old songs stick their noses into new songs. This will be our last band - we're becoming actors.
AKB: Or comedians...

The band’s currently unsigned, but few in the DiS office can imagine that lasting too long – have offers been coming your way, and are there plans to officially release something soon?
JRC: We seem to have had some interest, that's True. It sounds stupid, but maybe our manager knows more about that than we do. Or maybe we're just slyly oblivious to all this – some big people might like us. Let's hope they do and that we can leave our jobs and buy some nice clothes, and be on Jonathan Ross. If not, here's to a life of pointless drudgery.

The bands listed as influences on your MySpace are varied to say the least, albeit within a guitar-rock sphere, and you must get compared to Pavement a fair bit… are such comparisons complimentary to you? Do you think you fit within a certain tradition of indie-rock/college rock of the ‘90s?
JRC: I think the list of influences on our MySpace is a bit dubious - maybe these are bands we don't listen to, or perhaps even like any more. But listing every band you've ever listened to in your influences box seems totally retarded to me. There are certain elements that reflect them in our music, but we seem to always be changing. I do like Pavement, though... something really special makes them stand out from all those other lumpy bands - they have a perfect balance between being stupid and super intelligent, frivolous and sad, and their songs still sound amazing. I don't know where we fit into things, but definitely not the ‘90s – they don't exist anymore. It can feel like we're a bit on our own in terms of boxes, but maybe we're just not very sociable.
MA: Pavement's a definite influence, but I think about all kinds of stuff when I'm drumming - Elvis, Art Blakey, Neil Young, the Band...
AKB: I only seem to listen to Television and Bob Dylan these days really but Pavement pretty much sound-tracked my adolescence, Crooked Rain… anyway. We don't we really see ourselves in that lineage, though.

You’ve some dates forthcoming with some pretty popular-in-the-press sorts – I Was A Cub Scout and Someone Still Loves You Boris Yeltsin - do you think 2007 is shaping up to be a breakthrough year for you?
JRC: Looking forward to these shows a lot - it's going to be great to play at some nights with some good bands when the promoters have done the hard work – there’s nothing worse than a bad gig. We're working pretty hard in whatever time we have left after our jobs and stuff and we want to be good; we want to do well, so if something happens this year we'd be really happy. More people coming to see us and stuff would be cool.
AKB: It'd better be our breakthrough year. I think we are all going a bit crazy at our day jobs, and just to get money for doing something we love would be amazing.

What are your ultimate hopes for the band, realistically – do you hear that you’ve a commercial sound? Can you imagine your songs being played on popular radio?
JRC: Success/making good music. Why not the radio? We're not entrenched in any DIY bullshit.
MA: It’s not so hard to imagine being on the radio - thanks to Tipster Sam we were Radio 1 the other night, which was great. We've played some great small gigs with signed bands, such as Islands, and I really loved it, and playing the big gigs with big crowds and bands that live up to their names would be really good.

There’s a fair amount of humour in your MySpace blogs – would it be fair to say you’re a band that doesn’t take life, or rather life in the music industry, all that seriously? Do you like a laugh, generally? Did anyone buy an empty beer can?!
JRC: I think we're all morons with incredibly high IQs - we like to have fun, we're a bit like a secret members club in our studio. When we need to get serious I think we will get very serious. The beer offer was a moderately successful business venture –back-up in case the music didn't work out. We still need everyone to send us money. One fan sent us a fiver, so we had a few beers, but I still need to send him the Rod Stewart CD. Maybe Metin still has the money, actually - he's a bit of a Squirrel McHoarder. I think last year all we did was drink Becks beer, so it seemed like a good plan. By ‘plan’ I mean ‘way to drink more’.
MA: Yeah, I still have it, and will cash it in once we give the man his beer can and short film of it being drunk.

What should fans of your tracks thus far expect from the F4S live show? Fun times? Japes? Mischief? Etc?
JRC: Shy times/ minor disasters/ a few offensive comments / bit of moodiness/ technical problems/ anecdotes… and some japes and music. Hope we don't DiSappoint.
MA: We'll give them a good time. Think witty retorts to heckling is one of our strong points, particularly when stuff breaks.

Full details of Favours For Sailors’ DiScover Club show can be found here. The band’s MySpace page is here.