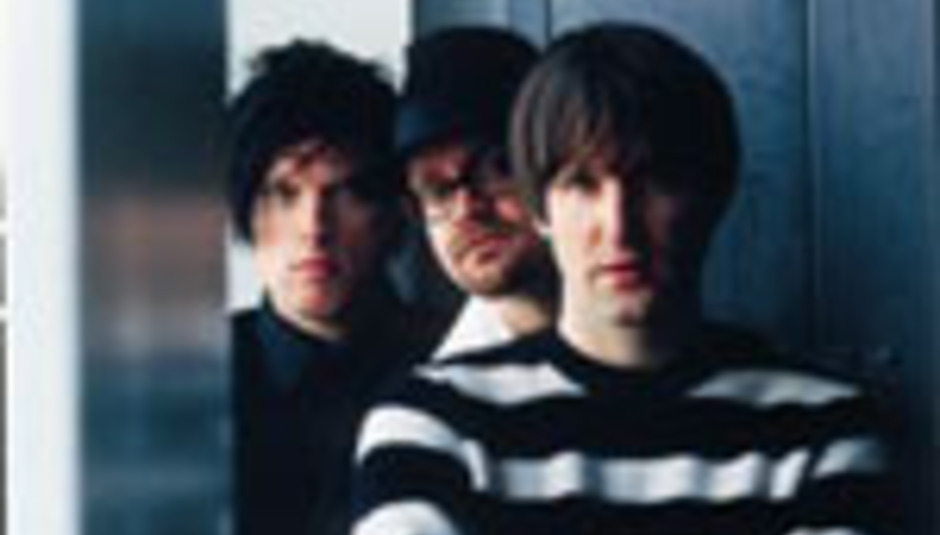 Freshly pruned to their original trio, Ash are back in the UK to promote their forthcoming fifth album, Twilight Of The Innocents.

With wayward guitarist Charlotte Hatherley departing for a blossoming solo career, the remaining three – Tim Wheeler (vocals, guitar), Mark Hamilton (bass) and Rick McMurray (drums) – are heading out on tour with the slimmed-down line-up that brought them to fame all the way back in 1996.

The trio appears to have grasped the opportunity for a new beginning, and their excitement about the new record is palpable.

How have you guys been the last few years?

It has been three years since the last album, Meltdown, hasn’t it? When is this one due?


So at the moment you’re doing a few dates…

T: We decided to go out and do a tour of universities. We always like to do a smaller venue tour, it’s a chance for the hardcore fans to come out and see us.


Could you paint a picture of the new album for us?

T: Well there’s a track up on our MySpace called ‘I Started a Fire’. We decided to put that out there as a sneak preview. We’re very proud of the album.
Mark Hamilton: We’ve got a single coming out on April 16th called ‘You Can’t Have It All’. I think it has the potential to be a good indie club dancefloor hit. It’s got a dancey verse, then the chorus is a classic Ash chorus.


Is the album completely done and dusted?

M: We finished the album, mixed it, went straight into rehearsals and straight on the road. It’s the fastest turnaround of anything we’ve ever done.
Rick McMurray: We recorded it ourselves in our own studio in New York.


It’s the first time you’ve self-produced an album – how did it all go?

T: It was cool. We had more time to try different stuff, that’s how the title track on the album evolved.


What approach should we be expecting on the new record?

R: Lyrically it’s probably the darkest thing since Nu-Clear Sounds, if not darker. But really it’s as poppy as Free All Angels or 1977, but with more of an experimental side to it.
M: I think even though people might not have liked the production or maybe even the songs as much on Meltdown, we were better musicians on that album and that has carried on with this one. It doesn’t sound as polished, either. It’s not as slick as Meltdown.
R: It’s more of an organic sound, really. More true to the Ash sound.
M: We’ve actually got a section in one of the songs called ‘End Of The World’ with human beatbox.
R: There was meant to be some rapping on the album, but it didn’t make it.


If you look back at all your albums, they seem to have alternated between big poppy ones and darker ones.

T: Yeah, anytime we’ve had success we’ve felt we can indulge ourselves and do what ever we felt like. It has kept us going – that’s been the secret of our longevity.


How was recording without Charlotte for the first time since 1977?

T: It was fine. I enjoyed doing all the guitars.


I read that you had admitted to being a control freak about the guitar parts.

T: A megalomaniac (laughs).
R: It’s not too strong a word (laughs). I think the communication between the three of us is just really good, you know.


So are you still living in New York?

T: Me and Mark live there. Rick lives in Edinburgh.
R: I stayed in a room with no windows in the studio, so I was living in darkness for about a quarter of last year.


These are also the first gigs you’ve done without Charlotte for some time. It’s quite interesting to see the public reaction, because there’s a lot of sentimentality attached to 1977-era Ash, which means the older generation of fans are quite interested again.

T: It shakes things up a bit. I suppose it brings up the nostalgia factor in some people.
M: We are actually playing up to it a bit. We reprinted up some of the old 1977 t-shirts that people can buy from the merch stands.
R: When Charlotte joined the band it took some fans a long time to get used to it and we were worried about that happening on this tour as well, but because we were a trio before people don’t seem to mind.
T: Everyone says it’s fucking great. I think we play so well now, it’s a real power trio thing.
M: Our agent was always on at us, “Oh you’ll need to get another guitarist, you’ll need to get someone to do backing vocals”. And now he’s like, “Fuck, it’s brilliant!”.


What’s next on the Ash schedule?

R: We’re doing three dates at Koko in July, then another bigger tour in the autumn and festivals as well.
M: We should have a big launch party for the album. We had a pretty notorious party for Free All Angels. It had punch, dwarves and prostitutes! (laughs)

Twilight Of The Innocents is out on Infectious on 2nd July, preceded by the single ‘You Can’t Have It All’ on April 14. The band play London’s Koko on July 3, 4 and 5. For more information check out their MySpace site here.

PLUS: DiS has signed copies of both Then & Now, something of a best-of round-up disc, and 'You Can't Have It All' to give away. To win both discs, simply answer this:

Send your answer to mike DOT diver AT drownedinsound DOT com, writing Hong Kong POOEY in the subject line and leaving your address and a telephone number.