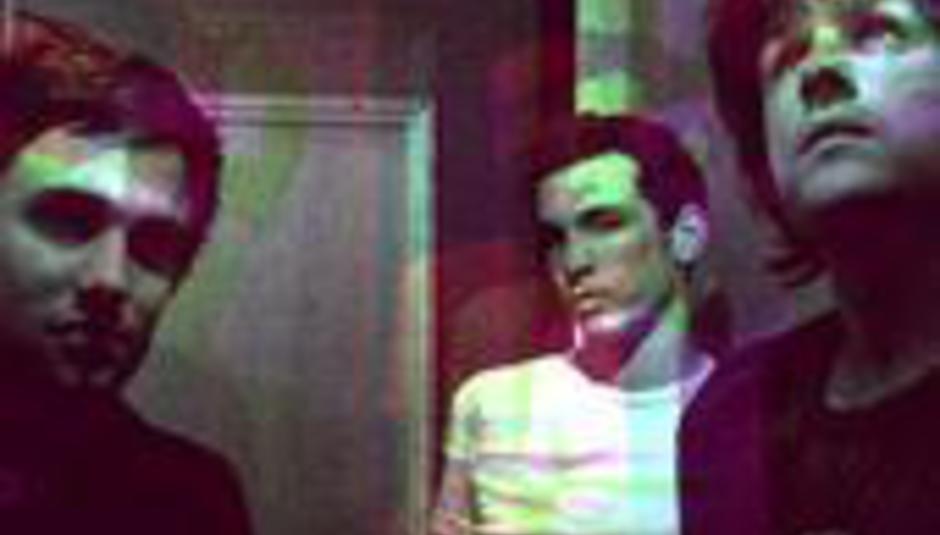 An Emergency are, perhaps, the best band in Britain that you're yet to hear. Yes, you've no doubt heard or read similar expressions of over-the-top praise dozens of times before, if not more, but stick with us here. Run your eyes over the following questions:

Do you love your indie-rock punked-up and jittery, jerky and convulsive?
But do you also love your indie-rock full of hooks the size of country-shattering battleships and vocals and chirp and chatter like parrots pinned to the canvas by a boa constrictor?
And, finally, do you like your innovative and engrossing and all-over-in-three-minutes indie-rock to hail from your own doorstep, rather than the streets of D.C. or Chicago?

If you answered in the affirmative to all three, then really: An Emergency are the band for you. Based in Exeter, the trio - Ben, Tom and Dan - have played the length and breadth of this land o' ours, but rarely as the star act. They've regularly supported mighty fine acts from overseas, but outside of their own city they've not often been granted the opportunity to shine in a headline capacity. DiS is going to change that this weekend: we love the band so much that we've invited them to play at our once-a-month DiScover Club, held at the Notting Hill Arts Club and in collaboration with the fine people of Rough Trade Shops.

With two 'albums' under their belt, the eight-tracker If This Is The Future, Count Us In and its nine-track follow-up We Are The Octagonists, the band should release a third long-ish-play effort in 2007; with luck it'll build upon the solid foundations of the aforementioned brace, and their profile will soar as it deserves to. Wait… solid foundations? This stuff ripples and rollicks more erratically than Q And Not U's entire back catalogue!

Come on down to the Arts Club on Saturday to check out the trio for yourself - full details of the DiScover Club show, also featuring twentysixfeet and October All Over, can be found here - but before that, DiScover An Emergency (all questions answered by Dan)…


Hello An Emergency! Please run through who’s in the band, and what they do… also, how and when (and why!) did the band come to be? You each have former bands, yes?

Hello, we are An Emergency, a punk rock band from Exeter, in Devon, in the United Kingdom. We have three elements (like any good meal) in the form of:

We formed about four years ago when mine and Ben's old band, Tyler, split up. We'd been doing this post-rock kinda stuff and decided to form a band where we could play fast songs on our guitars plugged straight into an amp, no messing. Tom, who used to play in The Red Letter Code, joined the band (along with a bass player, Exeter legend Jon Shoe) and An Emergency was born. Unfortunately Jon wasn't really feeling our arty nonsense so formed The Cut Ups and An Emergency ended up as a bass-less three-piece!

You’ve a pair of albums to your name, both of which have picked up good press. When can we expect another record of a similar length? Also, what releases do you have available at the minute? Splits, singles and the like…?

We're writing a record right now, but it's in pieces! We've got to put it all together, sand down the edges, add the eyebrows, dot the 'i's and cross the 't's. We hope to have it finished by the summer. A split 7" with Breakneck Static has just come out on Vacuous Pop / Freakscene records, which features our two newest recordings. It's on rad-heavy vinyl and Breakneck Static are a really great band; it's a pleasure to share some wax with those guys 'n' gals. I've also set up a label and we're gonna be doing another 7" split on that, but the details aren't set in stone yet.


There seems to be a strong visual element to the band’s releases, too – is this really important to the three of you, to not only make good music but present it in a way that’s, well, appealing?

Well I guess I have to answer this personally as I do the artwork! I'm glad that you've picked up on it as the way in which we represent ourselves graphically is VERY important to me - I'm a graphic designer (FakeFrench.com). I love it when you pick up a record and are struck by how great it looks; if it's an album you really love it just enhances the whole listening experience. I'm sure everybody has listened to their favourite record whilst studying the sleeve. I hope people do that with An Emergency releases one day. I'm also lucky in the fact that the other guys give me free-reign to do what I want - I have to admit to being a bit of a control freak!

You’ve played up and down this land of ours, supporting and headlining on bills to be applauded… what shows stick out in the memory? Have you been able to support (m)any bands that you really admire?

Supporting Q and not U at the Underworld in our first year of being a band was pretty incredible - we got a real sense of belonging at that show, as I guess we fitted in real nice! The crowd were great and the night was fun as we got to hang out with our buddies in Bullet Union. Also, playing with Ex Models in Exeter was a big deal for me. Any show where something weird or funny happens always sticks in our minds; some of these things include laying face flat on the floor in a rugby club in Somerset and doing a mean knee slide whilst playing a meaner riff (had to get that in) in Leeds last week!

Comparisons… who’ve you been compared to in the past (we’ve got to give the uninitiated some idea!) and what bands, if any, are particularly influencing you, right now or always? Do you think the band’s sound fits a predetermined scene at all, or are you able to appeal to a broad cross section of the potential audience…? Wow, this seems like business spiel…

Well Mike, we've been compared to Q And Not U lots! Also to the likes of Hot Snakes, Ex Models, Minutemen, Les Savy Fav and Sonic Youth. All that stuff is definitely in there, as we are big fans of all those bands. Sometimes it's a little frustrating when people take the stance that you a ripping bands off, but surely every band is a sum of its influences? We try to steer away from stuff that sounds too similar to certain bands now, and with each song we write I think we define our own sound a little more. We never set out to sound like anything in particular; we just play the way we know how to! At the moment we are digging the likes of AC/DC, The Sultans, !!!, MF Doom plus all those regulars listed above and many, many more.

I take it you drive yourselves – that being the case, are you always looking to play wherever you can, so long as it’s not involving silly journeys? Do day jobs hinder the band’s ability to play far away from home at all? Is there a strong enough ‘scene’ in Exeter to support bands like An Emergency?

We used to play pretty much anything that was offered to us! Now we are a little more selective, but not much - we just have to balance our lives with punk-rock the best we can and weigh up the financial implications of each trip. Unfortunately we can't afford to go do shows where we're losing money as we're all pretty broke, and driving from Devon to wherever usually takes a lot of petrol and time! Exeter is an incredible place that spawns loads of brilliant bands: we have, in my opinion, the best venue in the UK in the form of The Cavern, which is run totally independently and on its own terms. They've helped us out so much and The Cavern is also the place where probably 90 per cent of the bands in Exeter form and play and break-up! So yeah, the scene is good and very supportive: if you are good to the scene then the scene will be good to you.

Tom Cruise really is real, you know. Why do you think otherwise? (This question relates to a song on the band's recent Breakneck Static split…)

Ha ha! This all came from something a friend of ours said about Tom Cruise being Katie Holmes' 'beard', and that their relationship was only for publicity. Somehow we got to 'I don't think Tom Cruise is real', and we thought it was funny so we used it as a song title. We went through a stage of naming all our songs after famous people but decided that was a bit weird; now we have narrowed it down to one per release. My plan is to release a song called 'Natalie Portman' at the height of our success and hopefully strike up some sort of connection… swoon.

What does 2007 hold in store for the band? Are you looking to tour further afield, maybe on the continent? What are your ultimate ambitions for the band?

An Emergency play the DiS-curated DiScover Club, at Notting Hill Arts Club, London, this Saturday, March 3. Doors are at 4pm and the show is free entry. It's open to over-18s only. For full details, and to add the date to your gig calendar, click HERE.

Check out An Emergency on MySpace by clicking HERE.