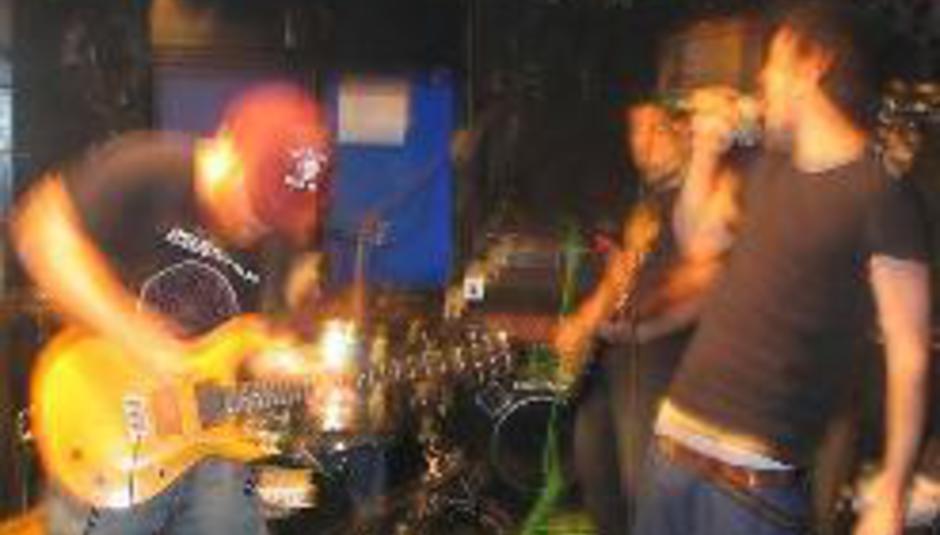 Down I Go are rock to the bone, but not as you or I have known it previously. The London four-piece’s self-coined brand of ‘diastercore’, showcased on last year’s This Is Disastercore long-player, takes the frenetic riffing of the finest punk acts around and solders it onto tongue-in-cheek lyrics about – yup – disasters. Only, it’s not totally for humorous effect, as the following will reveal.

But first, further background: Down I Go formed recently, in 2005; they are Pete, Alan, Marek (aka Mazbox) and Ben; their aforementioned LP was released via Undergroove, home to Minus The Bear and Johnny Truant among others; it was the follow-up to the quartet’s debut CDR release, This Is Dinocore (spotting a trend here?). Oh, and they’re really fucking great.

Down I Go play the second DiScover Club of the year at London’s Notting Hill Arts Club this Saturday, February 17, from 4pm ‘til 8pm. Joining them will be Manatees (interviewed for DiScover here) and Rolo Tomassi. Full gig details can be found here.

But for now, DiScover Down I Go…

Please introduce the band: members, who does what, why and how you formed and where, and what each member's favourite… oh, I don't know… cinema snack is. Me, those Aero Bubbles. Wicked, they are.

We're Down I Go, from London, all corners of it. We formed back in 2005 as an experiment, but then people liked our first CD and, even worse, someone took us seriously and asked us to do another record. We are Pete, a jazz saxophonist who discovered he could make dinosaur noises while very drunk; Alan, an obnoxious bald-headed angry man with a guitar, Ben, a drummer with two left hands; and Mazbox, who lost his bass guitar and then built another one in two days. Cinema snack: Maltesers, no contest.

You've been through an assortment of 'cores, if I'm correct: Dinocore and Disastercore. What's next, 'core-wise, for Down I Go?

Robocore is in the can, we're just waiting for someone to release it. The fact that the total running time comes to five minutes and 11 seconds, doesn't help much.

Friends of mine who've caught you live have commented on the humour in effect - would you say you're a band that doesn't take itself entirely seriously?

Not entirely. One thing that really got our goat was when Kerrang! said (about …Disastercore) that we were "chuckling at various historical tragedies", suggesting that we were trivialising death and being disrespectful towards those who died. We take the subject matter very seriously and approach the research element of writing music as an educational opportunity. Death is a big deal: it’s about the only thing we all have in common, that's why we think our lyrical content has universal appeal. We don't sing about girlfriends or modern life. We sing about bigger things.

That said, the music can be seriously brutal. Where do you sit, personally, pigeonhole wise? Are we talking hardcore, or some mutant genre that as yet has defied categorisation?

We shy away from the word 'hardcore' as it has certain lifestyle implications that none of us abide by. We create our own genres (Dinocore, Disastercore, Robocore etc) so we don't have anything to live up to. It's like jazz metal. We just haven't learned how to play the jazz bit yet.

Undergroove were kind enough to release the first (t'was the first, yeah?) album; what's cooking for its follow-up? How did the reception of the LP affect your fortunes?

We self-released …Dinocore on CDRs in little cardboard sleeves and sold a few hundred over the internet and at shows, then Darren at Undergroove got hold of one and said he'd release whatever we did next. We never thought anyone would expect us to be a proper band and we're still coming to terms with that. Our next full length release is likely to be This Is Tyrantcore, about tyrannical world leaders throughout history. We're still writing. Alan's reading a book about Vlad the Impaler.

As this is a DiS-curated show, we've tried to toss as much diversity as possible into the bill: have you had the opportunity to check out the bands you're playing with, Manatees and Rolo Tomassi? Thoughts?

I wouldn't say the bill was that diverse. I mean, we all make horrible noises, just at different speeds. We're particularly tense about playing with Rolo Tomassi, because they’re not all old enough to drink, so they might be sober when they play. Where as we...

** What does 2007, the rest of it, hold in store for the group? More tours/gigs/underpants-only shows?**

We're going to Europe in April, and might even make it as far as Budapest. We prefer to play countries that make decent beer and shun Carling. See you at the front!

_ Down I Go play the DiS-curated DiScover Club this Saturday, February 17, at London’s Notting Hill Arts Club. Also on the bill are Manatees and Rolo Tomassi, and Manatees are interviewed here. An interview with Rolo Tomassi will follow later in the week. The DiScover Club show is free entry, and open to over-18s only.

Down I Go’s current live plans are as follows:

Check Down I Go out on MySpace, HERE_.