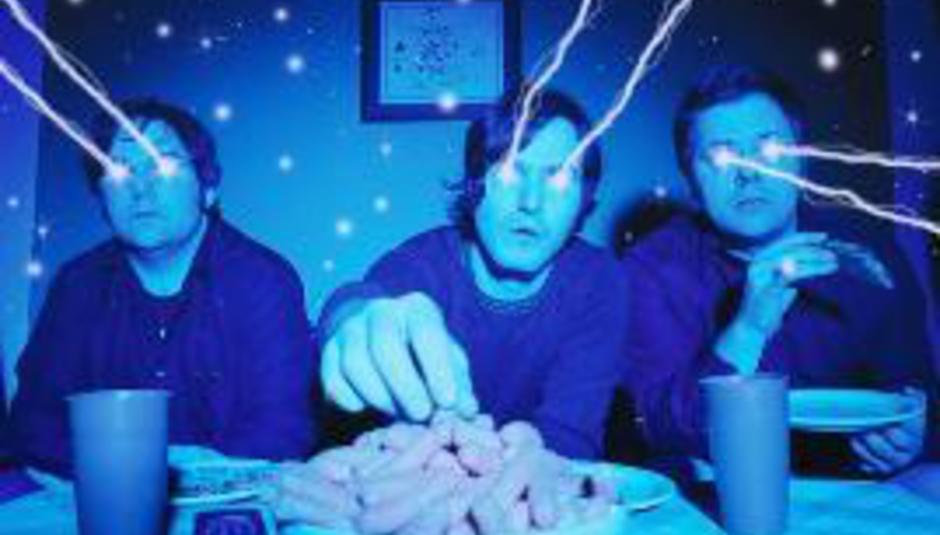 There’s every chance in the known world that you’re yet to let Riddle Of Steel’s invention-strewn post-hardcore wriggle its awkward way into your ears: the St. Louis-based trio don’t have the most enormous of profiles, and they’re unlikely to be heralded as leaders in any given field of temporary fashion. Music of substance and soul rarely enjoys the exposure it deserves.

In February, though, UK gig-goers will have the opportunity to catch the band – Andrew Elstner (guitar/vocals), Rob Smith (drums) and Jimmy Vavak (bass/vocals) – when they land for a series of dates, alongside the likes of DiS-tipped Meet Me In St Louis and Rolo Tomassi as well as House Of Brothers, who recently performed for DiS in London.

Riddle Of Steel list only three influences on their MySpace, but they should give newcomers some idea of the band’s left-of-center rock and roll: The Police, Trans Am and Led Zeppelin. Fans of Cap’n Jazz, Q And Not U, Queens Of The Stone Age and any act operating just below the radar of predictability but also packing a rhythmic punch is advised to check them out.

Elstner found time to subject himself to a gentle DiScover probing, and we’re pleased to report that the results look a little like this…

Where and when did Riddle Of Steel first form, and what was the catalyst, if there was a specific something? Were you influenced, at least initially, by any particular acts?
Riddle Of Steel started back in late November of 2000, right after I moved back to St. Louis from San Diego. I'd met Jimmy some time before I left St. Louis, when I rented a practice space to his old band, The Five Deadly Venoms. Jimmy and I kept loosely in touch while I was away and he'd mentioned a couple of times that if/when I moved back, we should hook up and make some music. So when I did, we got in touch with one of my long-time pals and a badass drummer, Ken McCray, and that was that. We wrote some songs and the first six were released as the Burn EP in early 2001. Now, thankfully, it’s out of print.

Is St. Louis a good place to be a band, i.e. are there a lot of bars/clubs for band such as Riddle Of Steel to play in? Is there a strong punk community?
St. Louis is a good place to be a band because it's cheap to live here. Because of this, we can tour much more easily than bands in bigger cities where it's really cost-prohibitive and we don't have to shell out ridiculous amounts of money for a rehearsal space. Otherwise, the ‘scene’ here is really fractured, but it's hard to really blame anyone. At the moment, the better venues in town seem to be closing down, so it's a little shaky at the moment. But, no one's really gonna go anywhere trying to get ‘famous’ in St. Louis. As to the punk community, maybe I'm too out of the loop, but compared to the level of house shows and D.I.Y. venues that used exist even just seven years ago or so, it's hard to feel like there's any real punk scene here at all. I'm sure there's some folks in town who'd wanna punch me for saying that, but what the hell do we know about ‘punk’ anyway? Kids now think Blink 182 and Good Charlotte are punk bands, so...

To my knowledge, and ownership, you've two albums behind you - Python (2003) and Got This Feelin' (2005). Are there any other releases out there people should know about?
Yeah, we've also put out the Burn EP, which I mentioned before, which for some reason is selling for about $40 a pop on eBay. We’re also on a compilation our label put out called The Socomtonar Collection, which we've got a couple tracks on. We also squeezed a track onto the Jawbox tribute CD, Until The Shaking Stops, which was fun.

Python was recorded with another drummer, was it not? Dave Turncratz, who joined Russian Circles? Are they a band you're friendly with, and why did Dave decide to switch one band for the other? Did you already have a replacement arranged?
Yeah, that's correct. Dave Turncrantz played with us for about two years, and was actually our fourth drummer. There was Ken McCray, Jason House, Jason Lawrence, then Dave and now Rob Smith. Dave was a great guy, with a hilarious sense of humour, and was a great drummer of course, but after a while it was obvious that his interests didn't match those of the band, so he was ‘let go’, as they say. That may sound low class for me to put it that way in an interview, but this is a part of our history that for some reason, many people have wrong. We wish Dave nothing but the best, and of course after he moved to Chicago he joined up with his long-time friends and they formed Russian Circles, previously known as Dakota Dakota. Their band and their latest disc (review) is freaking brilliant. Dave is rocking like never before. But, the very same day we split with Dave, I was on the phone with Rob and he was in the band. It's a much better fit all around for everyone involved, so there’s nothin' but love!

The February UK dates, are they your first, or do you have previous experiences of playing in the UK? Do you have any particular expectations of the UK dates, and have you been able to listen to any of the bands you'll be playing with (via MySpace, or whatever)?
This will actually be our second trip to the UK in just under 12 months. The only expectation we have is the incredible hospitality: it's really amazing in the UK. I also cannot possibly say enough good things about Claire and Paul with A Badge of Friendship (link). To say they've saved our UK tour is an understatement. You play enough shows, you hear enough loose talk and you realize how truly rare it is to find genuine people who say what they're going to do and do what they say. We're very much looking forward to sharing a beverage with those two. Anyway, yeah, the last time we came through, everyone treated us like gold, truly. We can't wait to get back. We haven't yet been able to check out too many of the bands we're playing with as the setting up of this tour has really consumed a lot of time. If the last trip was any indication, we should be pleasantly rocked.

With the last album released in 2005, does that mean a new one's ready for release? The previous two attracted many good reviews - does that make you more nervous with each release? As in, is there any pressure to match the first two albums, critically? Or do you not care, too much, for whatever critics have to say?
We do have a new record in the works. It's taken a bit longer than we had anticipated. The last two records did get some friendly reviews and some bad ones, too. I can honestly say that record reviews play no part in the writing of our records. You just can't take any of those reviews too seriously, whether they're good or bad, and we're already critical enough of our own material as it's being written, and afterwards. There is, I think, a certain, almost obvious degree of self indulgence to what we do, in that we are always writing to please ourselves. I mean, we're fans of music, so we know what we want out of a song. You can't really think about who would like what, so you just do your best and try at least to please yourself and if someone else doesn't like it... bummer for them.

What does the rest of 2007 hold in store for the band? I take it you'll be touring in the US. Any dates planned for further afield?
First on the order is to finish this next disc. After that it'll be: tour like madmen. With any luck we'll be back in the UK and Europe in another 12 months or less.

Both Python and Got This Feelin’ are available now via Ascetic Records. Check out their website here. Riddle Of Steel’s MySpace page is here, and their tour dates in February look like this:

February
8 Nottingham Rose Of England with House Of Brothers
9 Kingston The Fighting Cocks with Silent Front, They Died Too Young
11 Manchester Satan’s Hollow
13 Cambridge Cellar Bar with Rolo Tomassi and The Furious Sleep
24 London Imperial College Union with An Emergency, Meet Me In St Louis and Silent Front