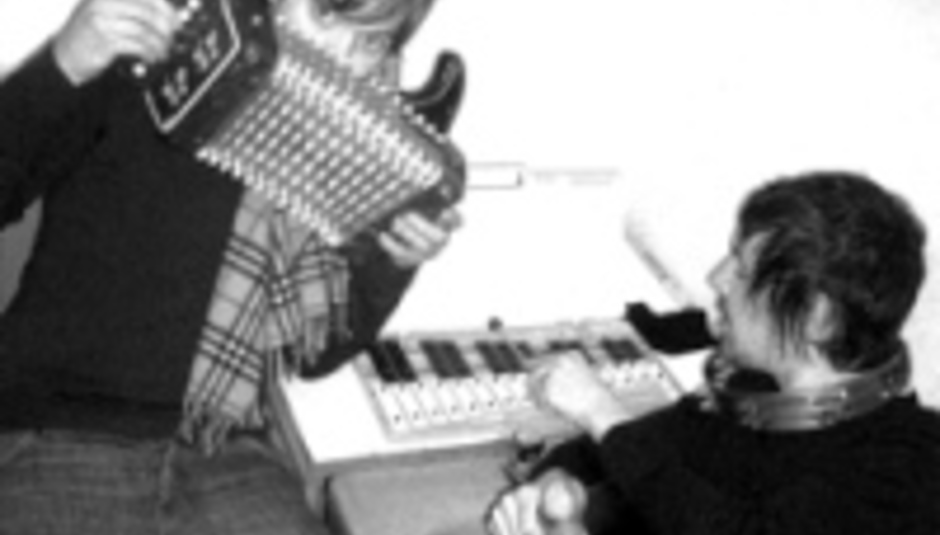 House Of Brothers is the I-play-guitar-and-sing alter-ego of Andrew Jackson, one-time member of both The Murder Of Rosa Luxemburg and Scarecrows. Both of his former acts were much loved by many a DiS writer, and his new project is going the right way to earning a similar level of adoration and respect.

Currently residing only on the internet, House Of Brothers’ recordings to date – or, rather, the two we’ve heard – are charming and sweet indie-pop-cum-folk affairs; you know, the sort of tender tunes that creep slowly into your synapses and soak gently into your grey matter. A week later you’re humming something you can’t place for ages, and then it clicks: it’s ‘Fisty Cuffs’, the song you heard at HoB’s MySpace page all those days ago.

Beside the aforementioned arrangement is the similarly delightful ‘Fall Down The Road’. Desperate to hear more, DiS invited HoB to play our regular DiScover Club at Notting Hill Arts Club, London, this Saturday. He said yes. We cheered. For full details of the free show – taking place, again, this Saturday, January 13 – please click HERE. Also appearing on the day are Derek Meins and the excellent Loney, Dear.

As part of the preview process, here’s a little Q&A with Mr Jackson. If you like what you read, perhaps you’ll join us on Saturday? Only a fool wouldn’t want to, if we’re being honest.

Both of the bands you used to be in, as listed on your MySpace, are ever so different to House Of Brothers… what made you go down the gentler route, and were you inspired at all by any other punk musicians that have done similar things? Frank Turner, for example, seems to be doing very well for himself solo…

Although the music I’m playing now is vastly different to the bands I’ve played in previously, the way I think about music hasn’t changed a great deal. I’ve always been more interested in crafting songs rather than merely getting in a room with people and being satisfied with whatever anyone else in the band brings to the table. To make great songs they need to be structured in your mind first and then fine tuned and manipulated into parts that flow together. Now that it’s just me writing music for myself I obviously don’t have to rely on anyone else, so there’s no compromise needed and I can spend as much time as I want on them until they sound perfect to me. People like Elliott Smith, Nick Drake and Ryan Adams all appeal to me for these very reasons; when you listen to their music you’re hearing them as individuals, there’s a sense of approaching music in a structured, methodical way. It’s mental music rather than physical music. It seems to be the big thing at the moment to get in a garage with your mates and make loads of noise and spend very little time in a studio perfecting the songs. This works if you can carry yourself off live on a gimmick, like handing out glow sticks at your show or wearing stupid costumes, but these bands’ records are never going to be timeless. They’re just fads that come and go with the fashions. Great songwriters stay with people.

When playing live, are you primarily solo or are you joined by other musicians? I see there’s something of a House of Brothers extended family: does that mean there will be full-band shows in the future? Can you see House of Brothers expanding to be a full band, all of the time? Or are you comfortable with it just being you?

So far it’s just me and an acoustic guitar live, but I would like to introduce other people to the live set up in the future. My friend owns a pub in my hometown and he’s built a studio at the very top. This means I’ve got a lot of time to spend on tracks which usually ends in introducing various instruments and people into the picture. It would be great to recreate the studio recordings live, but for now I like the idea of turning up to shows with just my guitar.

Your upcoming shows include slots with Riddle Of Steel and Loney Dear, two very different bands: are you more often than not being approached to play with loud punk/rock bands, or are more people booking you for quieter bills? Do you feel comfortable playing to a punk crowd?

It seems that some promoters prefer to put on diverse shows whereas others like to put on gigs with a similar theme. Of course, I’d rather be playing with bands that I like rather than loud metal or snotty punk, but I’ll still play on the same bill as such bands. I just want to play. The major problem is that a lot of young people don’t seem to want to start acoustic bands. That means that there aren’t many good singer/songwriter acts in the underground to play with. There are plenty of artists such as Sufjan Stevens and Iron & Wine that people like, yet there are very few youngsters in England who are doing something of a similar ilk. I guess this is because when you start a band it’s about playing with your friends and creating an energy. You want to do something more immediate when you’re younger. Yet, you would’ve thought that more people would think that there’s enough of these kind of chaotic or garage sort of bands around at the moment, so let’s do something a bit different. I’m yet to be informed of the next great English singer/songwriter.

Have any audience members reacted oddly to the new direction, after Scarecrows and the Murder Of? While neither were particularly huge, they nevertheless had fanbases: were any people put off, at all, by the acoustic songs you’re writing now?

People have been very positive and enthusiastic about House of Brothers so far. I’m just starting out, though. I’m sure people will compare this to what I’ve been involved in before and I don’t have a problem with that – it’s only natural to do so. Nevertheless, it shouldn’t be judged on any other merits other than its own. Everything that has been has passed. I’d like to think that this is a progression.

Your influences, again as listed on the MySpace site, are incredibly varied, but who have you been compared to exactly? Presumably nobody’s been so stupid as to draw parallels with bland-out artists like Damien Rice…

I’ve had friends say it’s a little Elliott Smith in parts but not many people have come up to me and said it sounds a lot like any one artist in particular. That’s got to be a good thing: I think the music stands on its own two feet rather than rests on the shoulders of someone else. My influences do range quite considerably, from Björk to The Beatles to Vashti Bunyan. I guess it’s my aim to make accessible yet intricate and interesting songs that you want to here again and again. I know that the one element that my favourite artists possess is that they are timeless; there’s no bandwagon for them to get onto because they make themselves. Surely that’s what any artist should strive for. Yet, there’s a fine line between innovation and experimentation. People seem so eager to create something so ‘new and different’ at the moment that many bands end up sounding like a bit of a joke. I’d put ‘new rave’ and especially ‘noise music’ into this bracket. You shouldn’t be afraid to emulate what you like and formulas that appeal to you. If you’ve got an individual flair it’ll carry through.

Are there any releases forthcoming? At the moment only two songs are available online – will this change soon?

Yeah, I’ve been recording for a little while now. I’ll be putting up some new songs within the next week or so. I haven’t got any plans of releasing the songs yet, I’m just going to play some shows and see what happens.

Have you had the opportunity to check out either of the acts you’ll be playing with on Saturday? If so, any thoughts?

Yes, I recently bought Sologne by Loney, Dear. I really like it. It’s got that typically Scandinavian twinkle to it, nice close vocals and layered instrumentation. I’m looking forward to seeing him play. Saturday should be a laugh.

House Of Brothers’ MySpace site can be found here. Saturday’s DiScover Club show – featuring House Of Brothers, Loney, Dear and Derek Meins – starts at 4pm and ends at 8pm. It is free entry, and open to over-18s only; for full details, please click here.