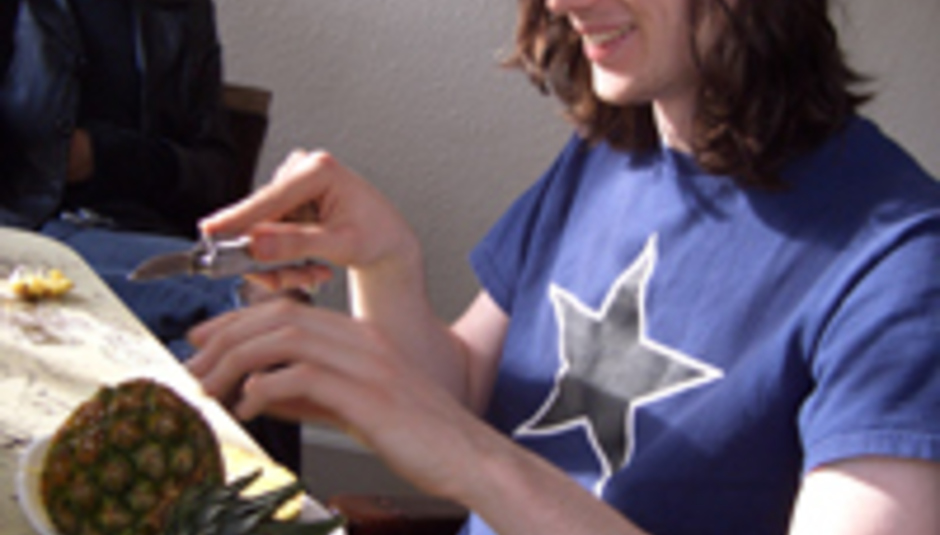 A Pilgrim's Progress: On The Road With Martin Grech Pt. I

A Pilgrim's Progress: On The Road With Martin Grech Pt. I

by Colin Weston August 16th, 2005
Earlier this year Tim of the band Sweet Billy Pilgrim was touring the UK as guitarist for Martin Grech. Throughout he kept a diary of what it was like and over the next few weeks we at DiS will be putting up some of his entries to give you an idea of just what it is like being on the road.

Tomorrow I start three weeks of rehearsals with Martin Grech in preparation for a UK tour to launch his new album, 'Unholy,' which comes out via Island on the 13th June.

I've spent the day so far up to my neck in cables and effects pedals trying to achieve something approaching a respectable guitar sound, and so far all I have to show for my labours is a symphony of low-end hum and current-based hiccups. It's quite a nice noise really. I have records that sound like this. Unfortunately Martin's new effort isn't one of them, so it looks like I've got a date with a soldering iron.

'Unholy,' is a pretty extreme experience on first listen. Especially when you know that you're going to have to physically navigate its many twists and turns. 'Bipolar' might have been a more accurate title perhaps as there is no middle ground at all. The heavier songs literally seeth, and violently contrast the rarefied, hymnal quiet of the rest.

I have played with Martin before, and on that first tour we saw lots of corduroy and brogues and leather elbow patches in the audience; people who had heard 'Open Heart Zoo' on that first Lexus ad. or Classical FM and thought it might all be like that. They usually lasted 2-3 minutes before disappearing in a cloud of pipe smoke and panic.

I can't help but think they should have bought some earplugs and stuck around. Even at its most possessed the music has a terrible beauty, generally communicated via Martin's mercurial quiver of a voice; a pure boyish soprano one second, a napalmed roar the next.

But it's not really up to me to review the record - just to play the bloody thing.

...at the end of the tunnel for the first time today.

A strange one really. As Martin put it, 'We're playing like shit, but for the first time I can kinda hear how it's going to sound.' In amongst all our missed cues, botched pedal switches and wrong notes were the first signs of five musicians becoming a band.

Saw the video for 'Guiltless,' the first single from Martin's album today. 'Audition' meets 'Eraserhead' meets a naked lady in John Doe's (from the film 'Seven') apartment would be a fairly accurate description, but for me it was all a bit less 'guiltless' and more 'relentless.'

It does, however, look stunning.

Somewhere around London Bridge a butterfly flapped its wings too vigorously, closing the Jubilee Line for my journey home. Everyone quickly figured that the best way to get to wherever they needed to be was to get into my almost empty carriage at Waterloo. When the doors opened and they all spilled in, I couldn't help but be reminded of the zombies overrunning the bunker at the end of Romero's 'Day of the Dead.'

It was all I could do to stop myself lifting my chin and offering them my pale, pulsing throat, just to get it over with.

Three shows down, fourteen to go. So far, so pretty-good-for-starters it would seem, though it's not really for me to say...

Tuesday 10th May - Peterborough Met Lounge: A warm welcome. Fresh fruit and homemade sandwiches on arrival, no apparent sniggering at my coffee fascism (no instant please), quickly followed by delivery of a cafétière of the real thing. Then a takeaway fit for an Olympusful of gods. All you good good people. Thank you.

There were nerves, but I think excitement was the overriding feeling amongst us. Interested to note our various warm-up techniques; Robin stretching and leaping like some punk rock Shaolin monk, Martin's solitary zen and my endless pacing. Pete either ate food or fixed stuff.

Walking through the audience to the stage, I allowed myself a little smile: it's nice to be able to say that I'm a musician for a living again. Then I remembered the endless stairs up which we'd hauled all the gear, and down which we would be returning it at the end of the evening, and my smugness evaporated.

The gig was fine - not amazing - but a strong start. I felt a bit uncomfortable with the sound (my amps felt a bit too far away), but we worked hard and I think the audience were into it. Managed to hit Martin in the head with the end of my guitar, but he didn't seem to notice. Guess I'll have to try harder next time.

Wednesday 11th May - Nottingham The Social: Started the day in slightly surreal fashion eating food in amongst the wicker and stuffed toys of a farm shop / café, somewhere en-route to the venue. An older gentleman in the queue enquired as to whether we were a basketball team, on account of our incredible tallness. He seemed faintly disappointed when I told him that we were in a band.

I ordered the Vegetable Bake. They forgot to cook it. Everyone waited.

The venue promised another vast staircase, so we took a stroll around the town to put off the inevitable load-in. It seems a nice place, though you sense that, move closer to touristic boundaries and you'd start to hear the deafening swish of a thousand shellsuits.

Martin and Keith bought a bottle of Jagermeister for later on, and exchanged sinister smiles when I mentioned that I hadn't tried it before.

The atmosphere back at the venue that night was tremendous. There were clearly many believers in the audience and Martin seemed very comfortable. Even that strange chap reaching out and playing Martin's guitar (while Martin was wearing it), was not enough to phase him. We all got very hot, and felt thoroughly appreciated.

Then we packed down, headed for the Travel Lodge, and a prior engagement with a certain herbal liquor and the smokiest non-smoking room ever.

Thursday 12th May - Leicester The Charlotte: Paler and quieter than usual, we shuffled onto the bus and made our way to Leicester. Pub lunch, then time to explore and buy a clean black t-shirt for the show, which was fairly sparsely attended as it turned out.

We all vowed to rock twice as hard, but it wasn't quite enough to overcome monitors that seemed to house clock/radio speakers, and two guitars (mine) that might as well have been made out of jelly for all the tuning stability they offered. Crowd seemed to like it though, and I still managed to crick my neck headbanging.

The next installment will be up next week but if you can't wait that long, read the whole thing in Tims blog.