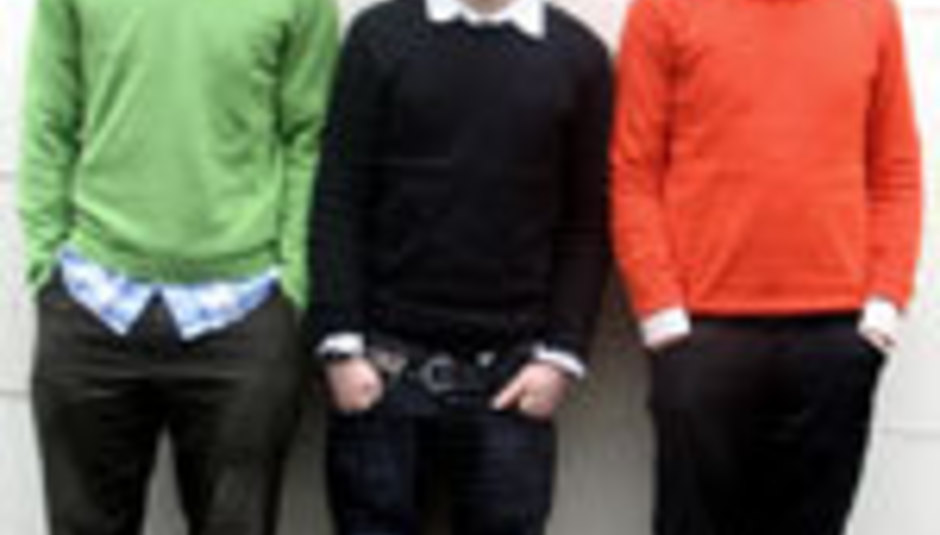 The Wombats are a delicious indie-pop troupe from Liverpool. Comprising two native Scousers and a Norwegian, they’ve been touring like crazy and releasing as many of those plastic music discs as possible, picking up several fans along the way.

Their Viking bassist Tord Overland Knudsen has just taken them on a brief tour of his homeland, and they’ve just been picked as one of the best bands to have played In The City ‘06. The Darkness were found there. Some might say it took a couple of years for The Darkness to get found out, but that’s neither here nor there.

If you could be drowned in anything, what would it be?
Matt: Those Innocent smoothie drinks.

Have you had any near-death experiences?
Matt: Yes, in Greece when I was 12. I was in the sea and a motorboat came over the top of me whilst underwater. It was a matter of feet!

If you could make one book as important and integral to Western society as the Bible, what would it be?
Dan: A book on how to fart in tune.
Matt: The Life and Times of Vincent Von Smart Bowels (Philosophy)

On a scale of 1-10, how do you look naked?
Dan: Apart from the large nipples and small penis I would say pretty good. Maybe an 8?

What is your favourite country?
Dan: Probably France because I've studied the language for enough years and have been there for many a fun summer holiday! The food is pretty tasty, also.
Matt: Tough question… Let's say Canada because it has an abundance of amazing bands and songwriters, and great wildlife!

What has been your most notable experience with fans and admirers?
Dan: Don't think we have much experience of that yet but a girl came from Minneapolis to see us play! She was visiting a friend also, but that doesn't sound as good!
Matt: After we got off stage at Midi Festival in China, two girls spotted us behind the stage and started pelting it at us Linford Christie style!

You spend so much time together, how do you stay friends?
Dan: We try to keep our romantic involvement down as much as possible but sometimes Murph's ears make me all tingly inside. Tord's Colgate smile is amazing.
Matt: We try and spend at least 80 per cent of our time together talking complete and utter nonsense, usually about sea bass, Winnie the Pooh or fresh pairs of bowels.

What advice would you give someone coming to one of your gigs?
Dan: Get a couple of pints down you and have a dance. Also, just stand back and admire the three hunks up on stage in front of you, whether you are male or female! Sea bass is optional.

What's your favourite booze and why?
Matt: On the wagon at mo, but until a month ago it was probably JD and Tia Maria – very expensive but slips down nicely.

Who or what do you miss the most?
Matt: Nappies. Everything was so simple.

What's your favourite childhood memory?
Dan: Christmas Eve when I believed in Santa. One Christmas I'd heard I was getting a toy model of the Star Wars space craft so at 3am on Christmas morning I apparently snuck downstairs and started opening everyone's presents trying to find it! My auntie heard some rustling and came down and sent me to bed! She then had to re-wrap everything! It was worth the wait in gold!

What was your worst haircut?
Dan: I tried to cut my own hair when I was seven. I ended up with a bald patch so I had to get it all shaved off. My girlfriend in school probably dumped me.
Matt: I used to have a centre-parting, which was later entitled 'Horris the Hairpiece'.

Name three things you could not live without.
Matt: Bungy Bear, pitta and humous, and the seaside.

Matt recommends that you all DiScover Alterkicks, Eugene McGuiness and their friends Greenwich Resident, because they are all apparently great. Dan had lots of fun at ATP but when he wants some mud-soaked drunken fun he always pops down to the Reading Festival. The weather was well average this year, wasn’t it!

The Wombats' new single, 'Moving to New York', is out on Kids on 13 November 2006; the band are touring everywhere at the moment.