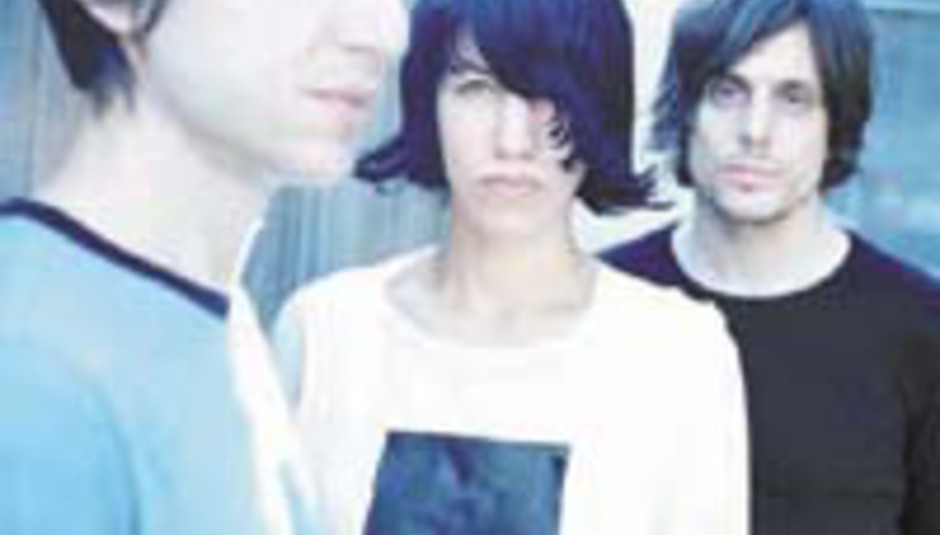 by Mike Diver July 11th, 2005
Autolux is: Eugene Goreshter, Carla Azar and Greg Edwards. Vocals and bass, vocals and drums, vocals and guitar. From Los Angeles. Responsible for Future Perfect, one of 2005's few genuinely glorious, utterly entrancing, deliciously dark and hostile and menacing and strangely melodic debuts, out in July through Full Time Hobby. Haunted by antiquated ghosts whose relevance now is perhaps greater than then; by the spirits of torchbearers both Slow and Bloody; by soul and fire and poison and hate and love and rage and sex and death.

Autolux are: Divided - Greg and Carla sit up front in their hire van, parked outside the Barfly, Camden; Eugene is elsewhere. Gently buzzing after playing one of the strangest shows we've seen, where the headliners go first and the inferior support act plays top trump. Smiling and shaking DiS's hand.

DiS has: its flies undone and hopes the duo won't notice. Done with the small talk and begun questioning.

This isn't your first time here, right?
Carla: We played Reading and Leeds [last summer] and then came back and played Koko [in Camden] and ATP.

And how was the ATP experience for you? Friends that went had nothing but praise for you...
Carla: It was great... amazing. It was completely packed, all the way to the back wall, so that was...
Greg: ...That was so much fun. I don't think any of us had been to an environment like that before.
Carla: We had to leave the next morning, but being there that whole day... We played early so we got to hang out and watch bands. We saw PJ Harvey...
Greg: ...It was like summer camp for the temporarily insane.

So how did that show compare to those first ones at the Reading and Leeds festivals, bearing in mind that Future Perfect was out and available when you played ATP, albeit in the States only? (Future Perfect was released Stateside in November 2004 by DMZ, a label created by producer T-Bone Burnett and the Coen brothers Joel and Ethan.)
Carla: We had fans at the ATP show - people were actually there to see us. At the Reading and Leeds things, no one knew anything about us, and we were rushed...
Greg: You kind of get other bands slopped on you.
Carla: ATP was our environment, which we didn't have tonight.
Greg: It's so strange to have finished playing and for it still to be light. The days are really longs here; I guess it's because we're (Britain is) so far north.
Carla: Right now in Los Angeles it gets dark about 8.15.
Greg: And it gets light so early here. All of the States, basically, are south of the UK, so we're not used to that.

But do you like it here? Three trips in not all that long, and each one before the album's even out here...
Carla: We love it. I'd love to do a whole tour here.
Greg: The record's coming out on, um, the 18th...
Carla: This is really just a promotional trip - we're doing a lot of press but also playing a few shows as well. We'd prefer to come over and tour for a month. We'll probably do one in the Fall, at the end of the year.

Do you think the album will do well here? I know this'll sound stupid, but I ask because I think it sounds 'British' in a way; like it'd fit in with the Creation roster of twelve or more years ago... some of the sounds are really evocative of the likes of Slowdive, MBV...
Greg: We definitely like all that stuff from a textural point of view, but I think the way we work at actual songwriting is different from a lot of those bands.
Carla: A lot of the grooves feel a lot different, I think.
Greg: But a lot of that stuff was really great. It had such a strong emotion to it, which is what we always look for in music, and which is so lacking most of the time.

It's a record that took a while to really seep into me - I liked it instantaneously, but have only discovered a real love for it - the sort where I'm playing it every other day - the last few weeks. Plus, everything sounds so big, even the relatively quiet songs...
Carla: That's T-Bone. Partially I think that stems from the recording - as far as it sounding so big, it's down to T-Bone's engineering. He wanted that mixed with our sound, and with our sensibilities and experimenting. It's a mixture of both. It's us but it's also an engineer that's getting everything sounding the way it is - it'd be easy to do that with the wrong person. I think we'd like to try other things [in the future].

So was working with T-Bone a short-term marriage of convenience, because he was a co-founder of the label?
Greg: Well, he approached us wanting to just help us, and he is very laissez faire, and facilitates a positive environment to work in but doesn't impose any regimented stuff on you. He's not trying to funnel you into something that he thinks is perfect, he actually likes when he hears things that surprise him or things that he doesn't necessarily understand. Then he'll sit with things, and kind of grow with it. That's why we wanted to work with him - in many ways he's an anti-producer producer.

How did the record end up being licensed in the UK by Full Time Hobby?
Carla: They wanted to put it out here, basically. Our manager met the owner, and he and the label really loved the album.

Is it important to have a base of operations here?
Carla: It is good I think.
Greg: There's almost something more exciting about becoming popular here before the US, 'cause it's a smaller market so it could happen quicker.
Carla: We'd like to do well here.
Greg: And to our jaded American eyes everything here is so beautiful...

I'm not sure about that - I'm sure if I made it to the States I'd think that was better than here...
Greg: Probably, yeah.

Did the record take a long time to record? Was it a particularly long process, from the initial writing to the eventual release? I ask as it sounds very focused, like it's had many a fine-tooth comb run through it...
Greg: It took a while, and there are a number of reasons for that. One is all the songs that we'd worked on from the beginning. People always talk about how the first album is the easiest, because the band has a glut of material that they've been working on the whole time, but in a way that's got an annoying aspect to it. You've got a certain amount of songs that you want to archive, and you're hammering out all the business things, and then Carla fell off a stage and broke her elbow...
Carla: I didn't fall, I jumped.
Greg: She was pushed, she was pushed! But yeah, all these things set it back, but yet there are these songs that make up the first album to you, and we were stuck and wanted to record them again. We had recorded a lot of them already, for a demo. I'm really looking forward to doing the second record in a quicker period of time, and being able to focus on a group of songs. We've lived with the songs on this record for so long that... well, I think a lot of bands go through this. It's just about to come out here, so for a lot of people it'll seem like something we've just made, but for us... It's really hard on bands.

You say that, but the record sounds really fresh to British ears. Maybe that's because we're, like you've said, a smaller market and we're force-fed fewer new bands, many of whom sound the same anyway. The sound-alike bands swamp the market, so Future Perfect sounds almost radical right now...
Carla: Well that's good! We don't know if it'll do well, but we hope it does well, because we want to come back and we looove English people. It's true! I wish I was English.

No you don't. If you were you'd have bad teeth and smell funny. Anyway, the other thing I noticed on the record is that, however loud and discordant it becomes, there's always at least a semblance of melody there, like these melodies course through its entirety, guiding it to its conclusion...
Greg: I think we like when music sounds really beautiful, and we like to arrive at that through dissonance. I think some of the most beautiful music seems really dissonant, but the more you listen to it the more melodic it becomes.
Carla: And then sometimes a melody that you might not get the first time suddenly becomes the most 'pop' thing ever. I like that. I never gravitate towards instantly catchy melodies.
Greg: I love records that are difficult to get into - you don't know what you're going to get out of them, but there's something about them that makes you listen more...
Carla: ...And then something clicks one day.
Greg: To me, I hate records that are one-dimensional. No matter how hard they hit you on a first listen, by the fifteenth listen you're not discovering anything more. The Beatles are the prime example - they could write the simplest, nursery rhyme stuff, but yet people keep rediscovering it, and it's so deep at the same time.

Autolux are then: Troubled by the driver who wishes to load the van. Tempted to attempt to drive the van themselves with no insurance.

DiS leaves: As Carla does indeed start the engine and put the van into reverse. While said driver panics like a grown man never should in public. And zips up its trousers.