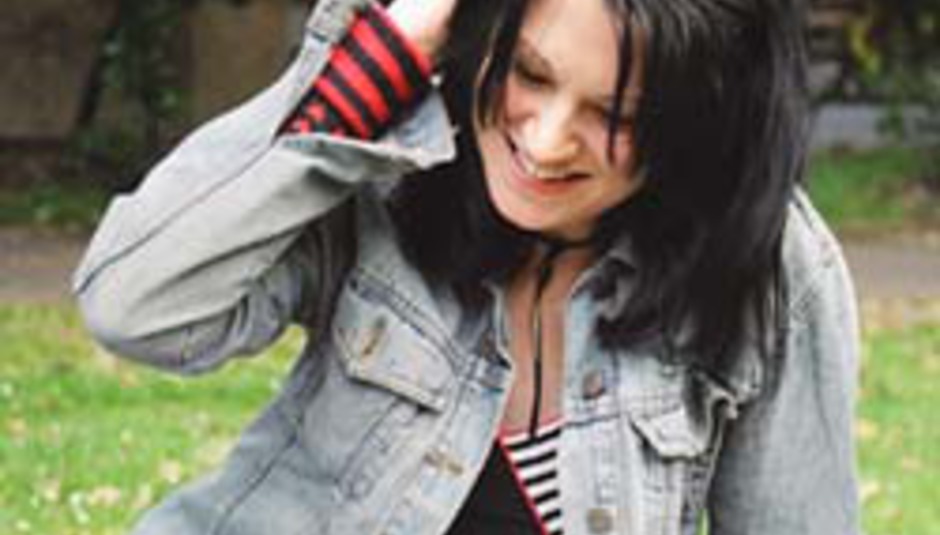 by Tom Edwards June 19th, 2005
A little prior to their split, DiS spent a sunny afternoon outside The Garage with that evening's headlining act, Ikara Colt. What followed was a characteristically no-holds barred rant about music, politics and society, that perhaps revealed the spirit of the group even more accurately than their music.

How’s the tour been going?
Paul Resende (vocals): It’s been good. Apart from one incident in Manchester.

What happened?
P: We were in the Night & Day. Our tour manager was just stepping off the stage and he put his foot on some beer crates, and they just went.
Tracy Bellaries (bass): He actually said to me, “Don’t fall off the side of that stage.”

Tell me about the Download Festival. I heard it went a bit tits up [it was reported that the band had been banned after inciting a stage invasion].
P: Oh, it’s all nonsense, nothing happened.
T: The bass amp packed up.
P: There’s no sensation, it was just a festival gig. There is always equipment break-downs and dodgy sound. We didn’t get to finish our set. We just ran out of time and of course you don’t want to play over the next band’s slot.

Tell me about your new album, Modern Apprentice.
P: It all went to plan. All the reviewers seemed to kind of like it, which is good. People seem to give everything we do 0/10 or 10/10.

I guess you’re a band that divides opinion.
P: Which is good. If you’re in the middle of the road, you’ll get run over. There’s nothing worse than apathy – I’d rather be booed for the whole 20 minutes.

Have you ever been booed for that long?
P: Yeah, when we played Manchester supporting Amen… I’m wrong, actually, there was only a small element. We divided the crowd.
Claire Ingram (guitar): I think going on tour with Amen was generally quite a challenge.
P: Credit to Amen. Usually bands take on tour people that sound like themselves.
C: It was really nice that Casey Chaos chose us. He’s a really big music fan.

Any other festivals lined up for this year?
C: Some European ones.
P: We’re doing one called Spazio in Italy, which sounds intriguing. But we’re playing with No Means No in a festival Belgium and they’re going on before us. God!

Mind you, The Pixies supported Stereophonics the other day, which is pretty crazy.
C: Yeah. It doesn’t seem quite right does it? Everyone seems to be there for curiosity value as much as anything else.
P: I think hand on heart, I wish they hadn’t have come back. We all know they did it for the money and that’s really sad.

What do you think of their solo stuff?
P: The Breeders are great. I haven’t heard any Frank Black.
T: Kim Deal is amazing. I think I’ve seen The Pixies. It was rammed and you couldn’t see anything.
P: I wanted going to Reading and to see Nirvana, but my mum and dad wouldn’t let me. I was too young, but I was really annoyed cos my friend who was a year below me at school was allowed to go. That just not fair (laughs)!

Do you think the climate has changed musically since your last album [2002’s Chat And Business]?
P: I think it’s got better. If you look back to where we were when we first started things were pretty bleak. There were two alternatives: crap acoustic home-grown stuff, or horrific misogynistic jock-metal. And lets be honest, that’s what rock was. A lot of good bands have come through since and I think it’s much healthier. I’m not too happy with some of the home-grown stuff that’s coming through at the moment, though.

Are there any specific scenes that you dislike?
P: Well, I remember Britpop. I didn’t like it then and I don’t like it now.

What do you think of Morrissey’s new stuff? Are you fans?
P: I am a Smiths fan, but I’ve only heard it once and it didn’t really move me that much.
Dominic Young (drums): I’ve got all his solo albums. It’s not a bad album… not his best, not his worst. But it’s going to date in a way that The Smiths albums never did.

Do you appreciate his views?
P: He’s done and said some stupid things. Some of those things that he did, he could have commented on after the incident happened – we all know the one, walking on stage at a Madness gig [Morrissey was accused of racism after wearing a Union Jack flag on stage in 1993].

Do you think national pride always has to be that negative thing? Bands like Blur and Suede were heralded for their ‘Britishness’.
T: I don’t think it’s necessary. It’s just arrogance really, isn’t it?
D: He [Morrissey] waves a flag and fucks off to America. He’s not nearly as relevant as he used to be. He can kid himself, but he ain’t. His glory days were in the ’80s. He’s just an old guy that went to America. He’s talking to 30 year-olds, isn’t he? Kids are going to say, “Who’s that geezer that looks like my dad with a tommy gun in his hand? Fuck off.” Maybe I’m wrong?
P: No, you’re right.
D: He’s got no relevance anymore. They’re listening to Pete whatever from the Libertines. He’s obviously got this obsession with working class people and he reflected the worst aspects of the East End, e.g. their bigotry. He’s splattered shit on his white suit and it’s going to stick there until he comes out and actually condemns it.

Which he’s never going to do.
D: No, so why are we bothering talking about him? Next question.

What do you think about Labour doing so badly in the local elections?
P: Well what does Blair fucking expect? I’m not for Labour or the fucking Tories. The Liberals are so fucking apathetic they can’t get it together when they could actually really do something. This country’s so fucking stupid. They did a survey, ‘Would you be willing to pay higher taxes for better health and education services?’ and 90% of the country went “yeah.” Then who did they vote for in the next election? The party that said it’s going to cut taxes. If we’re dealing with people that stupid then fuck ‘em.
D: Blair was bullshit then, he’s bullshit now. If you believed New Labour you’re more of a mug than I thought you were… With respect to the general public.
T: Where I grew up in Burnley, it’s grass roots Labour and the fucking BNP got voted in because Labour did such a shit job. They got in there and said, “If you vote for us, you’ll have better housing and we won’t let foreigners take your jobs,” and they went for it. It’s all bollocks, they’re just blatantly racist.

Are they doing anything for the people in that community?
D: They can’t be. They’re fucking fascists for God’s sake!
T: There’s a massive Asian population there. Racist people voted them in.
D: Blame it on anyone but themselves.
T: I blame Labour because they failed. That’s their grass roots support. How did that happen?
D: You know the Clinton thing don’t you? You look at your market, you look at the people who are going to vote for you and you don’t chase them any more. Then you go and get the people who aren’t going to vote for you. That’s what New Labour did to get in. What happens if you keep going for that? You lose them. They take their grass roots support as granted at their fucking peril. They stole the Tories’ thing and now there’s nothing to separate them.

Surely the main problem is what the public want, rather than the parties in power. They’re just adjusting to what they think everyone wants.
D: Yeah. Someone’s got to do something much more radical, haven’t they? They’re gonna need someone to do what Blair did – re-brand an old package. That morning after the Tories were out, you could see it in the air. It was beautiful! But after a year, it’s ‘meet the new boss, same as the old boss’. Blair just wants to do three terms like Thatcher. He’s got his eye on the history book, but he’s blown it over Iraq. We can understand his relationship with Clinton, but how can we understand his relationship with a right-wing Republican? Clinton just had a lazy zipper, that was his only flaw. I saw a sticker in America that made me laugh, “Clinton lied, but nobody died.” And that’s the fucking thing, man. But who’s the power behind Bush? That’s the worry. It’s the men you never see. They’ve got their agenda haven’t they? It’s getting very political this. Do you write for a political magazine?

Not really…
D: We’re not an overtly political band.
P: It makes a change from ‘what’s your favourite biscuit?’, ‘where did you get your band name from?’
D: I went to college once and studied American politics and British politics and how they inter-react and how they look at each other. I think everybody should have that lesson at school.
T: Yeah, you’re right actually.
D: Nobody will tell you about politics. They’ll indoctrinate you with religion from the age of five, but they’re not going to start telling you about what really affects your life. Suddenly someone’s talking about raising taxes, going to war and they’re not telling you how that runs. Jesus Christ! There should be a bloody revolution!

What do you think we are heading towards?
D: A slow disintegration and cultural high-jacking even more so by the Americans, and I believe it will retreat into nationalism and bigotry.

It does seem that way. But the BNP were saying they’d have a landslide victory and they didn’t advance one iota.
D: The only thing that’s going to save this country is the war. We hate the fascists. It went to Spain, it went to Germany, but we didn’t get there. There’s something about the British that isn’t susceptible to mass fascism. I believe that. Maybe this century could prove me wrong, but the older generation would fight it. When the BNP march, you can bet that loads of lefties will be there for the ruck as well – and that’s what’s going to save us!