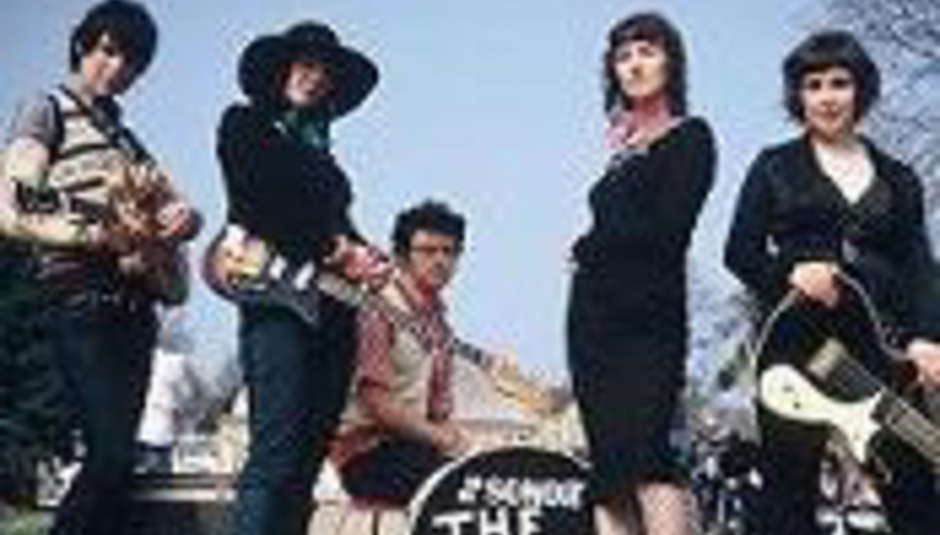 by holliy July 5th, 2005
With a single release and an American jaunt imminent, and having appeared on more radio stations than you could shake all the tea in China at, exciting times seem to be looming for The Long Blondes. Therefore, DiS felt duty bound to distract them from the work at hand for long enough to pose them a few questions. Straight answers were slim on the ground, but who cares when the turn of phrase is this fine? Style, sass and a damn fine ear for a tune... oh, we approve.

So, The Long Blondes: who are they and why do they choose to make the sounds they do?
Kate sings and always has done, though Am-Dram never really appealed. Dorian shrugged and picked up a guitar. Reenie found a bass in her Grandmothers attic. A white Jim Deacon guitar fell into Emma’s hands. Screech never wanted to play drums, we forced drums upon him.

Is the name a homage to any Long Blonde in particular, or just a general tribute to the lanky and fair-headed? Or, indeed, do you just like the way the words sound?
The Long Blondes are the ultimate fantasy pop group. Jean Harlow, Mae West, Edie Sedgewick, Nico, Nancy Sinatra and Barbara Windsor (not so long). Give them an instrument each and have a ball. We like to think of ourselves as being part of a wider lineage of acts than just other female fronted punk pop bands. Trace us back to vaudeville.

If you got asked to go on a reality TV audition-type-show, what would your response be?
Can we be on Pete Waterman’s team please?

What’s it like being part of the Angular Records mission? Does it feel like being part of a Movement, or is that an illusion imposed by the desperation of the world to catalogue everything as a Scene?
We love what Angular stand for and all that they have done for independent music in London but don’t consider ourselves as being part of a movement.

The lyrics are (as far as I can work out from reviews and writing credits) written by a bloke in the form of Dorian – but they’re pitched from what would seem to be a woman’s point of view, and they’re sung by frontwoman Kate. Did that slight gender role-switching thing just kinda Happen, or is it a calculated approach?
Well, the lyrics are written by both Dorian and Kate but ironically it is Dorian who writes from the heart of the tortured starlet and Kate from the heart of the pub landlord. We like to toy with preconceptions.

Is Sheffield a good town to be a band in? Can you recommend us any Steel City bands/zines/websites to check out and fall in love with?
Sheffield is an excellent town to be a band in. We practice in the empty shell of the steel works and romance over the backstreets of London road. We like few other bands but recommend Heim and any Invisible Spies projects. Also check out Go Sheffo, a fanzine about Sheffield, nothing more, nothing less.

While we’re on the subject of recommendations, can you pinpoint any influences on the Long Blondes sound? Which records/artists/rock’n’roll tomes made you who you are today…?
Must we be so undignified as to name names? Can we not just say that records, art and rock and roll made us who we are today?

How did the planned American jaunt come about?
We closed our eyes and wished so hard it hurt. When that failed we wrote and performed a song so infectious, a New Yorker by the name of Pedersen insisted we come to stay.

What’s the next step on The Long Blondes road to world domination?
We need to finish making that corset, terminate our employment and shave our legs before we go any further. When that’s out of the way, we can get on with the propaganda for our new single, ‘Appropriation (by any other name)’ out on the 20th June.

How can interested readers check you out – and why do you feel they should make a particular effort to do so?…
We are playing gigs in the North and in London at the beginning of June. Have a good look at our website thelongblondes.co.ukfor all the information you might need. No other band will give you so much instant gratification.