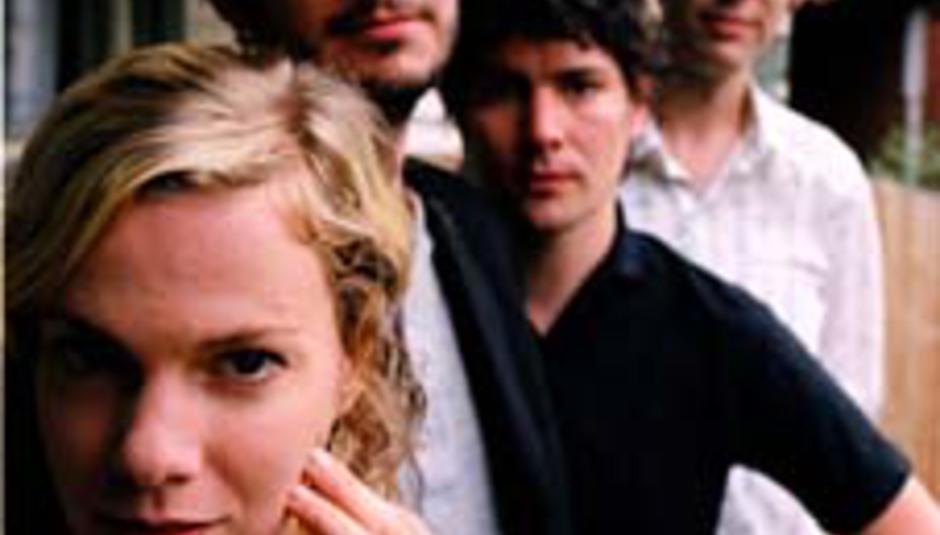 by Anthony Gibbons May 20th, 2005
Let’s face it, Bella Union Records is one fucking cool label: it was jointly set-up by Robin Guthrie and Simon Raymonde of the Cocteau Twins, and is currently home to Bikini Atoll, The Czars, The Dears, Laura Veirs, and of course, the mighty, Explosions In The Sky.

Melbourne’s Art Of Fighting have just joined the rosta with their second, superlative album ‘Second Storey’, one which reduced this cynical hack to a gibbering wreck. AoF plan to play the UK this autumn but for now DiS extended a handshake across cyberspace with guitarist Miles Browne and singer Peggy Frew, to chat about love, relationships, song writing, weather and the small matter of just who is going to win the Ashes...

Where are you today, what can you see from your window, and what's the weather like 'Down Under'?
Peggy Frew: I am in the kitchen in my home in Melbourne. It's night but if it was daytime I would be able to see my garden and maybe a cat or two. The weather here is cool but dry. It's autumn and we're in the middle of a drought.

Please could you give us a brief history of AoF.
PF: Ollie (Browne, singer/songwriter) and I met shortly after finishing high school and, inspired by our fave bands - Sonic Youth, Dinosaur Junior, Pavement, Sebadoh etc - decided to start a band of our own. Funny to think now that I wish I'd kept our early demo tapes to see how much like an American indie-rock band we sounded! Anyway, we convinced Ollie's brother Miles to join and we found a drummer. Then we broke the band up. Then we started it up again with another drummer but no Miles. Then Miles came back. Then drummer number two quit. Then Marty joined. Oh and along the way we made some recordings and played a lot of shows!

'Second Storey' made me cry (yes, really!). What makes 'Second Storey' such an emotive record? What inspired or influenced the making of 'Second Storey'?
Miles Browne: I guess the record was written in the context of Ollie and Peggy, who pen the songs, having broken up. Whilst the two of them get on well, and are always ambiguous about the basis for their songs, in recording the record we had returned to writing together after a year long break. I guess the break was one from which we were never sure we would return.
If there was an inspiration for the record it was I guess firstly the songs themselves that we had written prior to taking some time out, in the sense that they motivated us to continue writing together, and they were something we wanted to record with each other. These were ‘Two Rivers‘, ‘Your Easy Part‘, ‘Heart Translation’ and ‘Break For Me‘.
The second inspiration, I guess, was the idea of continuing to make music together in this new personal situation we found ourselves in, seeing if we could make it work and what would happen.
Your tears I cannot explain. During our first performances after Ollie and Peggy broke up I felt for the first time overwhelmed by the lyrical content of the songs we were performing. But it passed fairly quickly, which is fortunate because I am not a fan of performance art with music.

I've fallen in love with Peggy's voice on 'Where Trouble Lived'. It reminds me of Hope Sandoval. How did you meet and what role does Peggy play in AoF?
MB: Ollie and Peggy were going out, and I’m Ollie’s older brother, and we all used to like seeing bands, and listening to indie-rock in the days of techno, as did our friends. At the time it wasn't too hard to strap on a guitar and start playing shows.
As for Peggy's role she writes and plays all her bass parts and writes a small number of songs that we normally only hear just before recording begins. She shares driving duties on long trips with me and Marty and picks me up for rehearsals. She acts as a circuit breaker in the long and repetitive arguments that tend to engulf the rest of the band, and does more than her fair share of interviews. Tragically, she does not perform her songs live.

How big an audience do you have in Australia? Who is a typical AoF fan?
PF: A friend of ours says every time she comes to one of our shows the audience is completely different. Which is weird. I couldn't really say because I guess I don't really look at people much, because if you do then you start thinking about the whole situation and how strange it is to have all these people gathered in the one place in the semi-dark with lots of cigarettes and booze and pot and whatever.
Also, there's the thought that they are, amongst other things, there to watch you and that can freak you out if you let yourself think about it. But having said all that you meet people after the shows and they are just all really different - singles, couples, young earnest kids, freaks. All different people.
The last tour we did here in Australia was our biggest ever, because the tour was presented by a national youth radio network, which in most Australian cities is the only radio where you might hear music that's not ‘Top 40‘. So we were playing bigger shows than before. I guess 500 to 800 people in cities and 200 to 300 in smaller towns.

How much sibling rivalry goes on in AoF between Miles & Ollie? Who wins if you have a fight?
PF: There's not much rivalry as far as I can tell unless it's cleverly disguised as other forms of conflict but the fights can be pretty entertaining. Marty and I have special 'here we go again' smiles we give each other as we look on. But I'm afraid there's nothing too sensational to report because really the Browne brothers are both too nice. They have these weird sort of ‘nice-fights’ where they say stuff like 'look it's not your fault man, it's just blah blah and that makes me feel blah'. Funny. As for who wins, everyone's a winner in a nice-fight!

What other Australian bands should the UK be looking out for?
PF: We did our recent tour here with three-piece from Sydney called theredsunband (spelled like that). Their debut album, ‘Peapod‘ is really fantastic and they are also amazing live. I don't know what their touring plans are but I hope they make it over there one day. Also Holly Throsby: her album 'On Night' is wonderful. Who else? Clare Bowditch, My Disco, Ground Components, Small Knives, Youth Group, Because of Ghosts, Architecture in Helsinki, Sodastream (seasoned European tourers though I don't know about the UK) and Bird Blobs.

Who designed the artwork for the album and what is it inspired by (if anything)?
PF: That was done by Ollie in collaboration with our friend Cameron Bird. They do all our artwork. I don't really know how they do it. My guess is they hole up together and listen to the album until they almost can't take it any more and someone has an idea. Whatever they do it's always really cool though.

What does the future hold for AoF? Have you made plans to play in the UK?
PF: Yes we hope to do some shows in the UK as part of our European tour in September/October this year. We’re really looking forward to the tour and then more shows back here at home and then after that recording another album.

Finally, England are going to win the Ashes. Discuss.
PF: Umm, OK. I don't follow cricket. You are most welcome to have the Ashes as far as I'm concerned. How un-Australian is that?

Art Of Fighting's new album 'Second Storey' is out now on Bella Union.
For more info about AoF visit www.artoffighting.com