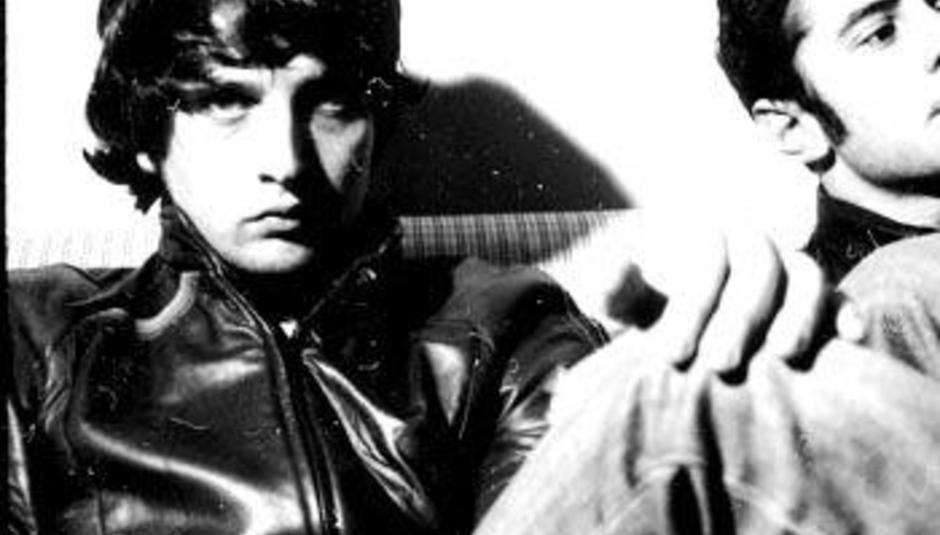 by Euan McLean May 13th, 2005
When The Real’s Kyle Gibson and Luc Gianello first met in a Melbourne schoolyard and decided to form a band, neither of them would have known that 13 years later they’d be playing at a west London club night run by one of the key figures in British music. Having left their native Australia for the colder climes of Britain, via stints in Venice and Amsterdam, the pair settled in London in order to try and make it in the toughest scene around. ‘We thought it would be best if we moved overseas as the scene in Melbourne didn’t provide what we wanted,' says Gianello. ‘It was the same bands we’d see over again, and we knew that if they weren’t getting anywhere then we’d need to go elsewhere. Every band we were getting into was British, so we thought we’d take a risk and move overseas to London’.

The risk seems to have paid off with the pair’s mix of laptop beats, pop sensibilities and manic on-stage aggression catching the attention of Danny Watson and Alan McGee, resulting in their appearance this week at the Poptone duo’s Death Disco night. Having previously played alongside the likes of Siobhan Fahey and Whitey, The Real seem to be moving in the right circles, but Gibson believes that any success so far is purely a result of hard work. ‘We have an advantage over other bands (in London) as we didn’t grow up here, so we’ve had to work harder to get anywhere. With high profile gigs, if we’re last on the bill, it’s last on a bill that people respect’.

The Real’s influences range from Roxy Music, Talking Heads, Jonathan Richman, Daft Punk and LCD Soundsystem, although James Murphy’s side project now leaves Gibson cold. ‘The songs aren’t as good after repeated listens. Production doesn’t just make a good song’. Although the band base their sound on the combination of laptop loops and traditional instruments, Gibson says that the writing process is a key factor before technology even gets a look in. ‘Often there are songs that we’ve liked but not gone on with, but then later gone back to because of some loose initial reason why it worked, and worked on the part we liked. We’re now going back to a lot of earlier songs and stripping them down to the initial parts we liked, and then working to make sure that part is still there instead of being lost’.

The addition of a new rhythm section has added ballast and balls to Gianello’s razor sharp guitar and Gibson’s frenzied role as frontman/crowd agitator. ‘Kyle’s like a dormant volcano before a show’, Gianello laughs. ‘He sits by himself quietly as if he’s somewhere else. Then when we get on stage the nerves seem to make him erupt!’ The closest male equivalent this writer’s seen to Karen O, Gibson stresses the importance of getting the music across in a live environment. ‘We want to get people to dance, and stir people’s emotions. It’s like you’re an engineer. When I’m on stage, the nervousness turns into energy. For some guys that’s too much, but the nervousness can be controlled which is a good thing’. The band aren’t about to rest on their laurels though, both on record and on stage, something Gibson is keen to stress. ‘We have to get to the stage where we say, ‘Fucking hell, I can’t see anything wrong with us’. We’re pretty anal, but you have to be. We’re pretty hard on ourselves’.

With the countless other bands in London jostling for the attentions of major label scouts, why should the public care about a band like The Real? 'Our ideas, our belief, it can't be questioned,' says Gianello. 'We're not a safety band that plays what people want. The reason that we're here is that we're your new supplier. There's no competition with us'.