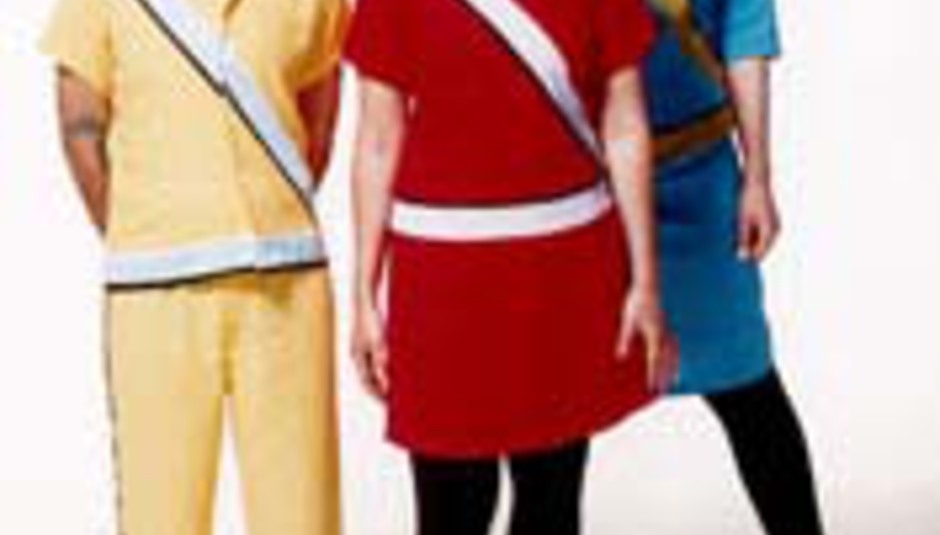 Grrrls On The Run!

Grrrls On The Run!

by Tom Edwards April 15th, 2005
Moving from strength to strength (they even have videos on MTV2 these days!) and longsince expanded from the insular Olympia, Washington scene, feminist punk-rock-cum-electro-pop threesome Le Tigre are currently sitting backstage at the Bristol Fleece & Firkin preparing for a show that will make their fans dance like the truest of crazies. With support from the mighty Gravy Train!!!! – a band whose idea of ‘a Bez’ is a male stripper who swings, Tarzan-like, from tabletop to tabletop trying, with some success, to seduce as many cute indie boyz as possible along the way – this tour was never gonna be one to let slip by. After a quick trip to the WC, where the ‘Train somehow manage to rope me into having my picture taken with them whilst standing at the urinal, I escape to the dressing room and into the company of the night’s three leading ladies.

How is being on a major label treating you?

Jo: So far, in terms of the way we function as a band, the things we do, it hasn’t changed that much. In a lot of ways it still feels very DIY in the sense that we’re still making decisions and it didn’t change making the record at all because we made it before we got the deal.

So you made the record before you signed?

J: We did a good amount of final mixes after we had the deal. JD: But we’d completely done the writing, the production. J: So the stuff that has changed is stuff external to the band. Efficiency and business.

Do you have as much control over that side of things as you have enjoyed previously?

J: Well there was nothing like that before, we never really did have any marketing, anything like that. It was really just doing interviews. It’s not like there was some kind of marketing campaign to approve of. I think what’s nice is getting to cities and seeing that there’s posters up for our shows (laughs). JD: And in terms of marketing and stuff like that, you’d be surprised how much of the Universal team are total freaks or queers or whatever and they definitely are marketing to our fans, which was something we were excited to see. It’s not like the people working there are all guys in suits. The people who we talk to are actually really cool.

What made you choose to sign to a major this time? [Former label] Mr Lady aren’t releasing records any more are they?

Kathleen: They decided not to put out any more records, so that was our hint to go somewhere else. So we started looking at all different kinds of labels, along with us deciding to experiment with getting our music in the mainstream and to see what kind of feminist following we could find. I think also we were using ProTools which really lends itself to pop music structure. So we decided to try it, but at the same time we also started our own independent record label and put out our back catalogue on that. We definitely have feet in both doors.

How has your audience changed since your popularity has grown?

JD: I think we’re getting a lot of younger kids, a lot of younger girls and younger poor kids. That’s really exciting because what we set out to do by going to a major label was to see how many more people in our community there were that just didn’t know about us. The vibe has really stayed the same, and yeah it seems that there are a couple more men, but they’re really nice guys. J: I think sometimes it’s like there’s still alternative people, but maybe people who hadn’t heard about our bands, like I see some goth kids in the crowd sometimes. Or there’s always the random gay guy with dreadlocks, or people you wouldn’t typically associate with our band, but that have found out about us and that’s really cool.

Presumably you watched the elections, obviously it didn’t turn out quite as well as it seemed to be going at the beginning. What’s the atmosphere like post-election?

J: I actually just heard from some friends of mine… you know it was the anniversary of the war on Iraq? And there was supposed to be a big protest in New York, but I guess not many people showed up, which was depressing news. But I think that it’ll take a while. It’s not like people are going to bounce back immediately. Progressive people really put there hearts into getting Bush out of office. I don’t think anyone’s giving up the struggle…

What do you think of the way the war’s going? Obviously everyone said it was all over two years ago, but there have been more casualties since then.

K: We don’t even really hear about the casualties of people who aren’t American. They don’t tell us, like the only people who matter are Americans. I don’t even think the casualty numbers for Americans are correct. We passed a thousand, but I bet we passed that a long time ago.

So you don’t think general people on the street know what’s going on? Do you think they really want to know?

K: Well you have to go out of your way to get real news, you have to go on the internet to specialist sites. It’s hard to read stuff off the computer for me, personally. And some people can’t even afford computers. And you have to spend all this time trying to find out what’s really going on, but most people are working more than eight hours a day. They go home and they’re not even really off work, they still get phone calls the whole entire time they’re at home. People who have kids. There’s no decent healthcare in our country, you have to pay for it yourself. No one has any time. I feel really embarassed to come from a country where people are so blatantly lied to and don’t seem to care and still vote for somebody who’s so against everyone’s best interests. But at the same time how can you fault people for being poor and being busy? Even the middle classes are totally shrinking in the United States.

One thing I found quite interesting recently was the Martha Stewart debacle. We haven’t really heard anything about it over here…

K: There’s a rumour that she got put in prison when she did for doing something very minimal, like insider trading that tons of people do, for like $40,000 dollars, which is nothing, especially compared how much she’s worth. And there was speculation that the reason is because the elections were coming up and she gives quite a lot of money to the Democratic party. So they wanted to tie up all of her money. J: Oh that’s interesting. K: Yeah, it happened right after she gave a bunch of money to the Democratic National Commity. J: I mean I knew that she was tried for $40.000, but compared to what has been going on in the United States in terms of insider trading and government corruption, war profiteering… K: I mean the Vice President was the CEO of Halliburton, which is supposedly rebuilding after a war, and if that’s not insider trading… and then you’re sending Martha Stewart to jail! But she’s gonna bounce back stronger than ever. JD: I heard that she stole spices from the kitchen in jail (all laugh). K: They should probably execute her for that (laughs).

K: She’s like Jamie Oliver or Nigella Lawson. She’s totally like Nigella Lawson, but not as sexy. J: It’s like décor and crafts… K: But she built her empire out of nothing. JD: It’s more like she’s a business person. J: She’s like Jay Z. All: Yeah (laughs). K: I just read this really funny article that she got out of jail and decided to make her Martha Stewart home magazine and TV show more for people with lower incomes, because when she was in jail she met all these people who were poor. I thought that was really funny (laughs). Like the first time she met someone who was poor and then said, “oh,” which is kind of rad, but it’s also kind of hilarious. JD: She was poor when she grew up though. K: Oh, really? JD: Yeah, she didn’t grow up wealthy that’s part of the reason why she’s so into never letting anything go to waste. K: Oh, I didn’t even realise. From the article, they were kinda making fun of her.

Looking back, what kind of impact do you think Riot Grrrl has had on music?

K: Well it says Ladyfest ’03 right up there on the wall. To me that means it was a success. There are still women organising things and a lot of the woman who interviewed me for fanzines 10 years ago are now interviewing me for Spin magazine and Rolling Stone. It’s nice that there’s smart people, women or men, that are journalists, it makes it easier to be in a band, you know? And I think if there’s feminist journalists around it definitely makes it easier for a feminist band to exist. And I think that’s something that Riot Grrrl had a big a hand in doing. A lot of people who were involved back then are now promoteres and writers and still doing stuff like setting up Ladyfests. I feel like it has had more of an influence on audiences than it really has in terms of music. I wish that there could be more good music. I felt like Bis was actually really influenced by Huggy Bear and that was a cool lineage and it would be nice to see that keep going on where people take bits of what I think is the better music that came from that time period and build on it. But I think the fact that more women and more gay kids in general are coming to shows is one of the biggest contributions that it has made. Just that people who typically are left out of pop culture and underground culture were invited back. There were brief moments in the ’70s and early ’80s, especially in England with X-Ray Spex and The Slits and The Raincoats, bands that were more popular over here, where people who typically weren’t included were included and I think that Riot Grrrl invited those people back in and they’re still going to our shows.