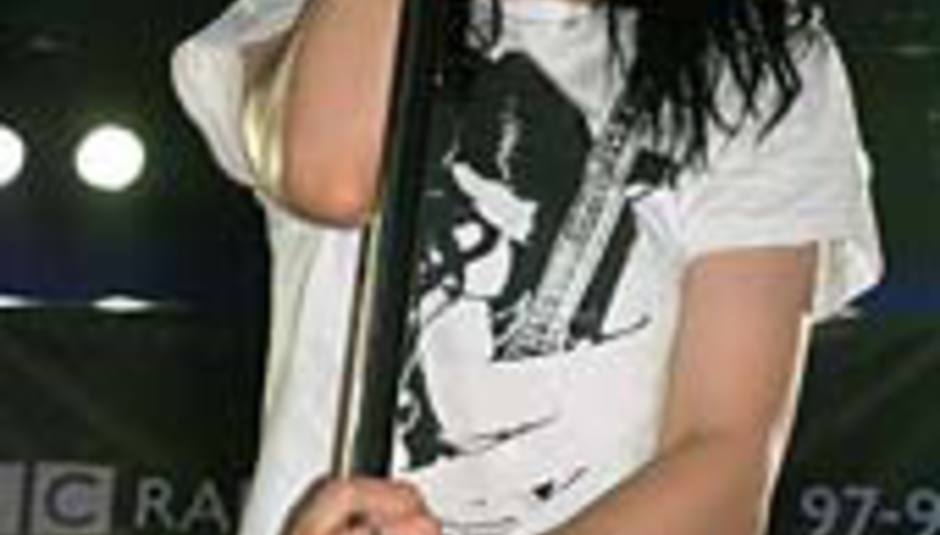 by Rob Webb March 30th, 2005
Hidden away behind plumes of cigarette smoke in their tiny dressing room, VV and Hotel (aka The Kills) look slightly uncomfortable. They’re not the only ones.

Alison and Jamie, as you’d never dare call them, are reputedly reluctant interviewees. Half an hour and an engaging conversation later, that particular myth is dispelled.

“Rock music is synonymous with danger. It’s always been anti-establishment and I’d hate to think that it’s not like that now,” reflects Hotel, the more talkative of the pair. DiS thinks new album ‘No Wow’ explores some pretty dark themes. He hears this a lot.

“It's weird how in film and literature those themes, the dark side of human nature, viciousness... they're expected almost to the point where a film bombs if it doesn't have sex and violence in it.
“But in music people think you're being underground and cult if you try and explore those themes.”
“It doesn’t make sense at all” interjects VV, finishing her friend’s sentence for him.

The pair completed ‘No Wow’ in the space of three months, with the writing process taking them just two and a half weeks. “It’s just one way of making a record, it’s not like it’s the best way or the only way,” explains Hotel.
“We just wanted to recreate the adrenaline rush of playing live. We didn’t want to be comfortable. We wanted it to be claustrophobic and really intense, have a bit of fear involved in it.”
“Comfort’s a bad thing in art,” is VV’s explanation. “This whole thing is nerves … there’s two of us and everything can go wrong. Not one of us can have a lazy day.”

Bobby Gillespie drummed on a track for them when they supported Primal Scream, but it didn’t feel right according to Hotel. “Not having that control, it was weird. I like the relentless metronome of the drum machine!”

It’s a throwback to the days when drums were there just to provide a backbeat, a reference point for the rest of the band. Like Mo Tucker in The Velvet Underground, perhaps? “They’re a massive influence,” enthuses Hotel. “Not just musically, that whole scene. They were a band who couldn’t just be contained on stage or on record.”
VV nods her approval before Hotel continues talking about their shared love for Reed’s seminal noise outfit. “Their creativity just spilled out into all these other areas. If you talk about The Velvet Underground you've got to talk about Warhol and Ginsberg.”

“There’s loads of bands around now that I love, like TV On The Radio, Fiery Furnaces and Electrelane, but record companies have largely absorbed that kind of creativity and turned it into really dull things… poster campaigns, promo videos… I want to see a bit more chaos.”

The guitarist takes his music seriously and detests what he sees as the commodification of bands by the music press, and one publication in particular. “The NME make music into a fucking joke, they make bands into a joke and they go out of their way to make it a joke.”
“It’s like a cross between a music magazine and Heat magazine,” agrees VV.

“It still seems like yesterday when we had nothing, so when someone offers you five hundred grand for a beer commercial you can't help but think what you could do with that money,” admits Hotel. “But we decided that our band was going to be the most important thing above everything else, above even our friendship, above being commercial and above any financial incentive so it doesn't seem that hard to turn it down.
“Any artist, whether you're a painter, a writer or a musician, has this struggle to leave their mark. We want to leave our mark but I'd be happier to leave my mark in twenty years time than feel like a commodity.”