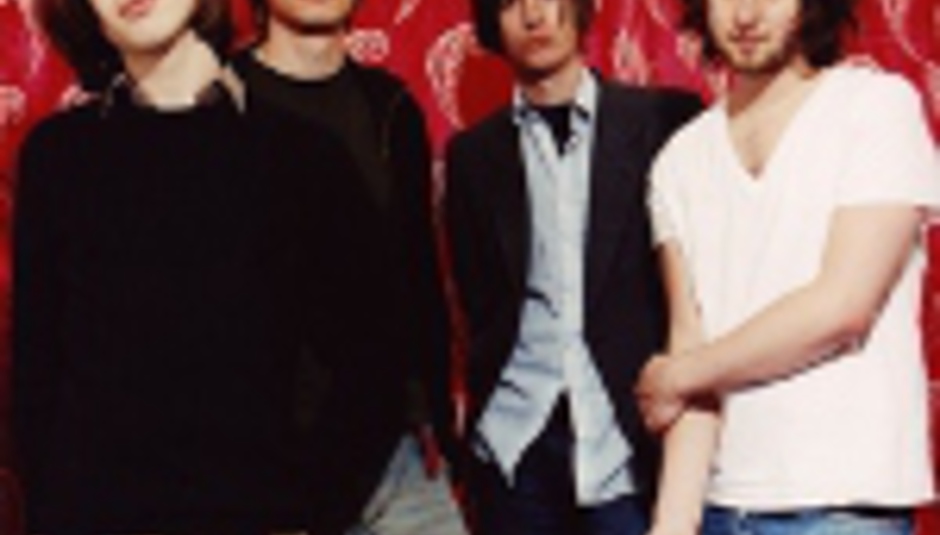 by Anthony Gibbons March 2nd, 2005
Nirvana. There we said it. Nine Black Alps will no doubt groan collectively at the very mention of the name. Yet, the influence of Seattle's finest infuses infectious new single 'Shot Down' with pure, punk rock adrenaline, an angry energy which fuels Nine Black Alps live, driving them on, even when they're virtually on their knees with 'flu, as they were in Cambridge when DiS went to meet them at the run down local polytechnic.

Sam Forrest (vocals / guitar), David Jones (guitar / bass), Martin Cohen (bass / guitar / child scaring beard), and James Galley (drums) look knackered. All collectively shiver as they face yet another interview in yet another freezing cold venue. They look bored and sound tired but are unfailingly polite with a dry-as-a-bone sense of humour. The foursome are based in Manchester but are actually from, variously, Oldham and York and bonded over many a drunken night at fabled Mancunian water hole The Star & Garter.

One imagines they would rather be there now then chatting to DiS about greed, envy, money, and Sylvia Plath but chat they must and chat they did.

Why should we like Nine Black Alps?
James: ...because we're a juggernaut of rock! You shouldn't have to like us. Make your own mind up.

Your single 'Shot Down'. What's it all about?
Sam: Being pissed off at people who have more money than me. It's basically about greed and envy. I got pissed off at seeing people driving to work in their big flash cars while I had to wait for a bus or walk 10 sodding miles to work. It's an angry think piece.

Agree or disagree: The Guardian reckons naming yourself after a Sylvia Plath poem is 'either an intriguing move... or straight off the default reading list for the postgraduate course in "no on understands me"':
Sam: Both those options are complete bollocks. If the writer concerned had spent any length of time speaking to us he'd understand why we picked the name. We needed a name at short notice and picked it off a list because it was the least worst name available. No thought involved at all. He's totally over analysed it.
Martin: We're not literature students. I picked up on the name because Ryan Adams wrote a song called 'Sylvia Plath' (from the 2001 album 'Gold) so I decided to find out more about her. That's it. There's nothing complicated about it. We're not intellectuals.
Sam: We're pretending to be incredibly intellectual which is even worse. (Sighs) We're just thick Northerners aren't we?

True or false: You only played a mere handful of gigs before you got signed:
All: True!
Martin: I think we played about 12 before we got signed.
David: There can be jealousy but it's usually from the people who have friends in bands, everyone's got a mate who's in a band that's better than you and they probably are. We're not claiming to be the best band in the world.
Martin: People don't trust us because we haven't paid our dues but we've all been in bands before doing the usual bollocks. I've lifted enough amps in my life. I think I've suffered enough.
Sam: I can understand why people get upset about it, we're not a manufactured band, we're not Maroon 5. To me it's just the punk thing of get up there and get on with it.

Yes or no: you know you've made it when your early releases are flogged on EBay. For example, one can pick up the 'Cosmopolitan' single on vinyl (first released on Melodic) for about £50.
Sam: No. It's just people jumping on the hype bandwagon, trying to make some money out of us.
David: There seems to be more people buying it just to sell it on hoping to make a quick buck. I bet none of them have even heard of us let alone played the single!

How do you think America will react to your SXSW appearance? What do you hope to gain from it?
James: To sell more records!
David: I think our label want us to go to really sell ourselves. Quite who we're playing with I don't know. I do know it isn't Billy Idol unfortunately!

What other new Manchester bands should we look out for?
David: Longcut
Sam: There's a guy called Nick Ainsworth from The Former Bullies who's just a singer with a guitar backed up by a drummer. Really, really good.
James: Free Cake. Weird but good.
Sam: There certainly seems to be more excitement from people who are just waiting for something big to happen. Again.

What does the future hold for Nine Black Alps?
Martin: "Touring. Touring, touring, and, er, touring.
Sam: That's our lives for the next six months.
Martin: It means we just keep getting better but it does take its toll on you.

What's the best piece of advice you've ever been given?
David: Once a wanker, always a wanker.