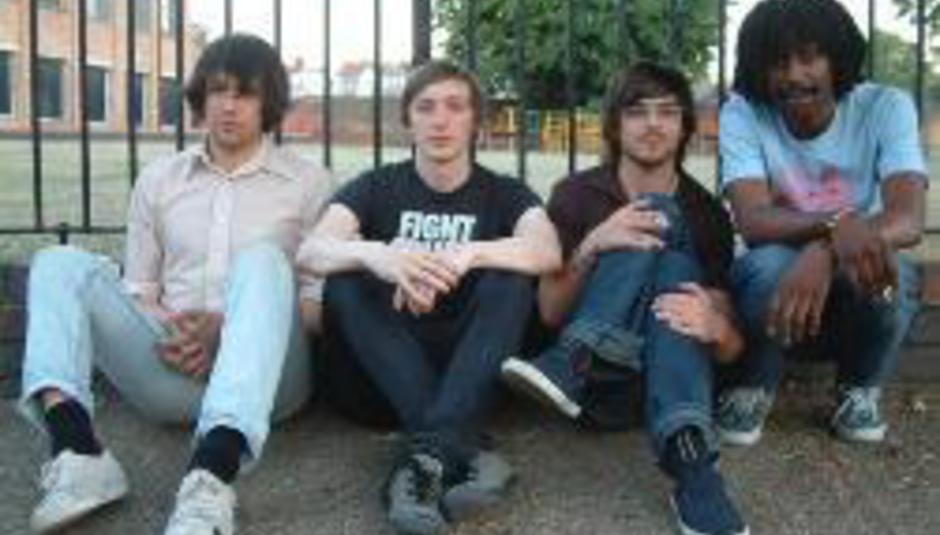 One of the capital’s most visceral, jaw-droppingly astounding live acts, Optimist Club have until now made little impact in the recordings arena. But that’s about to change with the release of the four-piece’s eight-track Ripped & Psyched: How To Be A Winner through their own Dumb Beasts label. The mini-album – at barely twenty minutes, it can hardly be considered a long-player – should be available at the end of October, but in the meantime a sample of its hyperactive something-punk (insert your own prefix) brilliance can be heard at the band’s MySpace page. ‘Hitchcock Blonde’ is a minute-something of mercilessly shredded guitars and acerbically intelligent vocals.

Ahead of the quartet’s headline set at the DiS-curated RoTa show (Saturday September 9), we caught up with Bryn (vocals, guitar) and Jeion (guitar) to talk touring, drummers, aspirations and motherhubbarding punk rock. The band’s completed by Beanie on drums and Adam on bass. The RoTa show is the band’s second-to-last on UK soil until mid-October, as they tour Europe from September 15 until September 24. Readers in France, Italy, the Czech Republic, Austria, Switzerland and Germany are advised to check the band’s MySpace (here) to see if they’re palying near them.

For full details of tomorrow’s RoTa show – that’s Saturday September 9, at Notting Hill Arts Club, London – please click HERE. It’s a free show, from four in the afternoon until eight in the evening. You’d be a fool not to attend, frankly.

Tell us a little something something – like, everything, really – about your forthcoming record. We’ve been playing it in the office. It sounds very rad. But what’s the story behind it? You’re gonna release it yourselves, right? Bryn (pictured, left): We’ve recorded about seven or eight demos since the band got together and we figured that it was time to make a more substantial record. So we made Ripped & Psyched, which for us is like a ‘Best Of’ record but for anyone hearing it for the first time it’s, “Welcome to Optimist Club! Here’s our first album!” It’s also a ‘Thank You’ card for everyone who has shown us their support up to now.
We’ve set up our label, Dumb Beasts, and the Optimist Club album will be the first release. The record will be available at our gig on September 13 (at Kingston’s Fighting Cocks) before we tour in Europe, and we’ll be getting it up for sale online and in shops by late October, hopefully a bit sooner. We also have Stockpile Records in Cambridge putting out a seven-inch single of ‘Panic Button’ and ‘41,000 Years’ for us.

Jeion: Musically, this marks the end of chapter one. It’s a relief to have the blood sweat and tears compiled on one recording.

Having a drummer leave can be a bummer (original drummer Betts left a few months ago), but I see you’ve a new one, Beanie. Was this recruiting process a pain, or smooth as silk?

Bryn: Yeah for sure, having any member leave the group is going to fundamentally change the way it operates because we have a democratic writing process where everybody has an input. We’ve known Beanie for a couple of years now, been to gigs with him and also played with his other bands Orion Arm and the Modus Vivendi. We thought he’d be able to pick up our set quite quickly since he knew the material already from seeing us play it live. When Betts left we didn’t want to be too set back, and we had a few gigs booked where we didn’t want to let the promoters down, so we gave Beanie a call and he was happy to play music with us. Things fell into place and we had the whole transition sorted within a day or two. We saw Betts the other day which was nice he’s doing lots of session work and UK Grime projects.
Jeion: There was really only one man for the job. Did he past the test? He wrote the test!

Your live shows can be pretty intense – is this where you feel you’re strongest, on stage rather than in the studio? Have you ever been met with any audience hostility, because of your tendency to get into the crowd if need be…?

Bryn: Obviously live performances and studio recordings are entirely different beasts. I enjoy both of them as long as the surroundings and circumstances feel right. I think we’ve become more comfortable in the studio with experience but the live performance is the lifeblood of the band. That’s where our music is best realised.
We do like to get into the audience but we do it in a non-violent way actually it’s more of an intimate thing. Occasionally we have come up against some hostility and we’ve recently developed a new attitude towards people who are intent on disrupting the show. We stop playing. This is something I saw An Albatross do at The (Highbury) Garage and I think it works very well. A kid started pushing the keyboards into the keyboard player and the whole band stopped to make an example of this kid. Since the majority of the audience were there to enjoy the music and wanted the band to continue playing, the rest of the audience chucked this kid out and the band got back to it. Jeion (pictured, right): With each recording project I think we're getting closer to capturing our sound. I've had some bastards try and sabotage my set up a few times. Shouting at them over the mic’ is my favoured way of stopping them.

I guess you’re usually billed with punk acts, but there’s a dance-ability (is that a word?) to your music that I imagine would go down well with more butt-shaking acts, the punk-funkers (or whatever) of this world. Do you like being the cat amongst the pigeons at events (the DiS RoTa bill is particularly diverse!), or do you prefer playing bills where the bands share common stylistic traits?

Jeion: It’s not so much about style when it comes to enjoying the line-ups, just more about being excited by other acts to the point that we want to get on stage and give it some. Any band that engages the crowd (preferably making them butt-shake) is the right bunch to play along side us.
Bryn: I like playing when the audience are there for the whole event rather than just for their friends’ band. This is often something more to do with promoters, who figure that they can make money by putting on four entirely different bands with different audiences, so the night has larger potential audience than if they stayed within a scene. What actually happens is fifteen people stand in the room and watch their friends play, then leave, and the next fifteen come in to watch their friends’ band, and so on. We have played on some bizarre bills in the past and I think it’s because we can be difficult to place, stylistically. I’d much rather play with punk bands than with NME knock-offs.

What’s better: touring in a van across the country and meeting people, or playing London only to a crowd of the same old faces? I get the impression that some acts seem to think that playing the capital a few nights a week will get them somewhere… I don’t agree. You’ve got to get out into the ‘regions’, no?

Jeion: Very true, and once you play there, you’ve got to go back. We need to do more of that and we will. We promise.
Bryn: We’re looking to be much more active around the UK next year, and we have our first European tour coming up in September.

What are your hopes for the band, realistically? Do you want the self-released record to lead to something bigger, or do you think that the music you play doesn’t have a big enough market (ergh, business talk) to warrant a move to some label that’s going to make you do things you’re not happy with, to net them as many bucks as possible?

Bryn: I’d like the band to carry on developing and building. It’s good that we have the record ready as I’m sure it’ll be a way of introducing more people to the band and the band to more people. Music doesn’t really exist without an audience and our goals are higher than that of bedroom musicians. We’d like as many people to hear what we’ve done as possible which I think is a normal desire for anyone who creates music they are proud of.
I believe the music we play has quite a large potential ‘market’, as you put it, but it’ll take time to extend our reach to more people by touring and generally promoting ourselves. It takes a lot of patience. The record will help this process simply because it’s something you can hold in your hand and say, “This is Optimist Club”. We like looking after our own business – it’s tough but rewarding. We’re not against handing over some responsibilities to labels or managers or whatever, but we haven’t really found the right people yet.
Jeion: There are many people out there who haven't heard us but will be up for what we're doing. Playing ATP would be a real achievement.

Jeion: Anything that makes you shake your butt is great.
Bryn: I remember being at school listening to punk rock tapes in the playground – stuff like Johnny Cooper Clarke, Los Trios Paranoias and Pere Ubu… some quite depraved stuff. It makes me wonder why we called the band Optimist Club!

Just to reiterate, DiS’s really-actually-wonderful RoTa show takes place TOMORROW. Or today, if you’re reading this on Saturday September 9. If you are, and it’s two in the afternoon or something, get those skates on! Doors are at four! Click HERE for all the information you’ll neeeeeeeeeed…