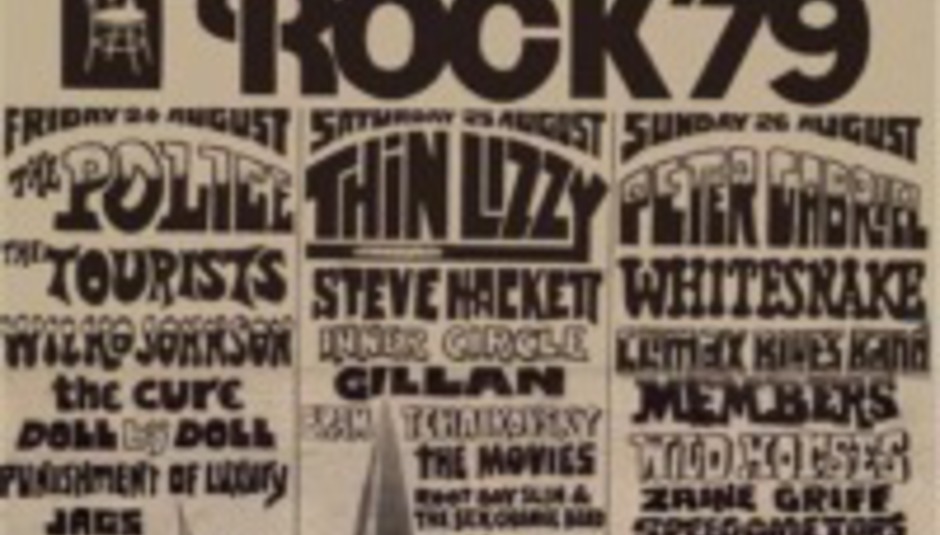 The last night at Reading Festival is always the best. The last night and the Thursday night, when most of the campers arrive and tonsils, livers and legs are naturally at their most zealous. But that’s been, and I missed it, and now I’m stuck by a campfire in the midst of Reading’s final throes, staring out into the near distance.

Everyone’s out on the paths looking to get re-wired – on drink or drugs or fire or plain absurdity – just so they can run 'til tomorrow off the fresh adrenaline. Fight or flight?

I’m no different from the rest caught here; wide-eyed in this gut-drawn stand-off between blackout and more widely accepted standards of sensibility. I just hope that they are as hopeless as I am, so that I can begin to ignore the futility of doing this idiot run from the harsher light that waits with the morning.

It's a week later and so far the morning after hasn’t featured much in people’s memoirs of Reading festival. I think this is to do, to some extent, with the sleeping arrangements and more specifically, the tents.

Whereas the sore head and dull eyes pulled by other parties is a standard touching point – “On the big’un were you last night mate? Bet that hurt in the morning!”, etc – for next day conversation, the hot, cold, colder, coldest, hottest, hot cycle meted out sans pitié by canvas tents WE erected means crawling out of bed in the morning is like draining a thermos – toxins (and everything else) sweated out into blankets and sleeping bags.

Dot Cotton! Available from just £19.99 at Millets, for all your nephew's needs.

Tonight was a lot quieter than last night. Still, I don’t remember much. Which is unwieldy for a review written post-event, as most tend to be. What I can ascertain is that, whichever way you look at it, this was definitely the middle.

Whether you’re looking backwards or working forwards. So, a lull in the centre of my three-day mission, from which the salient memory is of sneaking away between Dizzee Rascal and Primal Scream to relieve myself over the face of the ginger one from The Fratellis. Not the other two – they were positioned too highly, so as to be out of reach for the arc – but the ginger one, he was bent double and gurning gleefully even in the face of my ‘controversy’.

Later, we’re sat dolefully around someone else’s campfire. Why is it so quiet tonight? We’re not on it – that much is obvious – but this is rather a large campsite. I’m sure if the fairy lights that man the pathways happened to coagulate some way, somehow into a familiar enough symbol, then aliens would set down in a Brown, Green or Purple camp hectic with mayhem. The mayhem that made Reading for me every year for the past five, one way or another, without fail, without the bands. Flames, booze, foodfights and explosions; oil drums, hash cakes, mobile raves and 'riots'; ride the barrel and odd idols; climbing poles and burning gazebos; sads and drunks and blow jobs and “Trolley… trolley…trolley, trolley, trolley…”

You, with the overly large head and green antennae, I dare you to log these actions and rituals and file them under ‘human’. Then come squat in this trolley... it won't hurt a bit... I promise.

Come to think of it, weren’t Primal Scream on last night?

When all's told though, it’s nothing more than headless, groundless hedonism. Reading, of the three most established festivals, is the best example of a festival purely for festival’s sake – as well as Leeds, obviously.

It isn’t V with its pretences toward ‘real’ music and midnight bedtime, and it isn’t the wacky, hippy grandmother that Glastonbury is. No: Reading has no ties to anything barring inebriated chaos, meaning – quite handily – that it has no qualms, excuses or baggage.

Ever tried to explain Reading Festival to someone that has never been before? It can’t be easily pigeonholed and commodified because there isn't and never was a consistent, definable ‘Reading spirit’. In the six years I have decamped to Little John’s Farm for the August bank holiday, genre-dominance has shifted through nu-metal, punk, drum’n’bass, emo and indie, in terms of aesthetic and word-of-mouth, campsite popularity.

This time, most people I speak to are here for Klaxons, but the campsite traditions have remained the same and the emphasis continues to lie with drug- and drink-fuelled masochism.

If this truth holds then my Reading was tonight, when I lost my mind.

Working all week, it had gradually dawned on me that this would be an inevitability. I only had three nights, so I couldn’t wait to slide gradually into a Reading mindset. No, the shift would have to be done manually, and with jolting, razor’s-edge efficiency.

Some time later I found myself becoming increasingly integral to some honourable loose collective. We were called the 'UK ravers', and we were the coolest. Lesser tribes were absorbed by the sheer dilation, direction and dedication of our swelled ranks and our rabble was the gabba.

We picked a leader at random. A reticent young waif named David. 'Shy Dave' was born and he led us well; through oil barrel drummers, fire-jumpers, Glaswegian 'security' and rude men in posing pouches. Before a trolley holding a figure dressed in medieval pageantry shot across the crossroads in front of us.

This would be a test of Shy Dave's leadership skills. The trolley was thrust forward, beserk with its rudderless freedom, before it tripped on the roots of a big oak and the knight was hurled from his carriage.

Soon a gulley was formed, stretching out the length of two large hauliers, two people deep on either side. The trolleys stood at either end, each with their own captain before human motors run the gulley, metal shuddering and shaking before impact. This time the knight had kept his seat and he was pleased, but our attention had already been stolen by the boy in the tree.

A crowd had gathered around the base of the oak to the apparent ignorance of the climber, who seemed genuinely surprised at the eyes he was attracting. Our cries of "Jump! Jump!" soon attracted a crowd of around 150 people and, inevitably, Glaswegian 'security'.

We'd let our guard down, and now security had the climber and the trolleys. He was tempted down and led away by security with the crowd's abuse ringing in his ears. "The pussy!"

My memory wakes up at around five, when I decided that it would be a good idea to tramp over to Brown where my friends were camped. They refused to wake up, so I stole their inflatable chair. It didn’t matter, it was stolen!

Back on the paths, it was getting light. I knew that I had to get this chair back to base camp – the alternatives didn’t bear thinking about. Brown paths are notoriously sticky and are certainly no place for white, £5 plimsoles.

I fell flat on my back once. Got up. Picked up the chair. Turned around. Fell flat on my arse, twice. Got up. Kicked the chair, which by now was beginning to become something of a burden. But I had a job to do, and I’m a professional. I fell over again, before regaining balance and heading off to talk to a group of people gathered near the burger van. They didn’t want to talk to me.

I arrived back at camp at around seven, according to my girlfriend, covered in mud and sweaty-eyed. When I woke up the chair was gone.

I wake up at home, asleep on top of the covers in the same clothes and neon make-up that I was wearing during the Klaxons some time last night; the combined memories of six festivals coagulating in my brain. The window’s open and I’ve been away for a few hours, though you wouldn’t know it by the sky outside which is a sheet of blank grey that can only say BANG the summer is dead and that FUN IS GONE.

From here, there’s a steady pull into frosty mornings and winter coats and school children walking past you in the dark; news with the curtains shut and dead, stinking leaves. I’ll see you out under the streetlights on fireworks night, now just the 60 days away. Which is, what… twelve Readings?