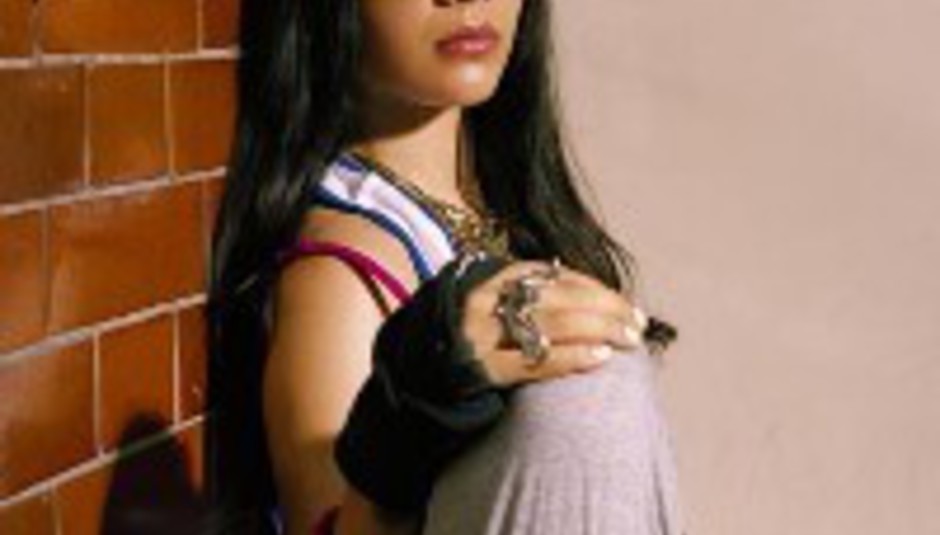 Natasha Khan’s hand is warm but slightly trembling – it has nothing to do with this writer’s appearance, but everything to do with the capital’s public transportation system. Khan, who’s travelled up from her hometown of Brighton for a series of interviews, has lugged both a suitcase and a drum from her destination station to here, an unremarkable bar just off Regent Street. She’s late, slightly stressed and physically tired after tackling The Underground’s network of tunnels and stairways.

“The Underground has so many steps,” she says as we both sink into our seats – sturdy and comfortable, they’re the exact opposite of the rickety table upon which our drinks so precariously perch. “I was carrying a drum around with my suitcase and there’s a lack of chivalry going on in this country – nobody helped me. Someone walked past me and went ‘Ha!’ and had a little ‘dur-dur-dur-dur-dur-dur’ on my drum, and I was like, ‘Thanks for helping’. What’s happened to men? Why couldn’t anyone have given me a hand?”

Chances are that innumerable offers of baggage-conveying assistance will come Khan’s way once her debut album under her musical nom de plume, Bat For Lashes, attracts itself an audience. Fur And Gold is in stores, via Echo, now, and follows in the wake of no little critical acclaim for its preceding single, ‘The Wizard’ (released on seven-inch and also through the DiS Digital Singles Club, click the link to download). Comparisons to both Kate Bush and Björk have put Khan in an awkward position, albeit one enviable to many: what happens if the record fails to live up to its pre-curtain billing? What happens if those points of reference are ones that she can never parallel in her own way? Khan seems to have become detached from the record’s reception before it’s so much as begun in earnest.

---
"When I made the album it was a very pure process, just being honest and not being frightened to try things out ‘cause it’s not cool or whatever"
---

“I don’t really care if people like it or not,” she says, before immediately qualifying what seems like a reckless, rash statement. “All I care about is if I get fucked up in the process of people responding to it. Like, what I think I’m most frightened of is something happening to me, that means I’m not able to write music anymore. That’s what I’m most frightened about. You know, just pressure.”

She continues, as our drinks slip and slide across a wobbling tabletop: “When I made the album it was a very pure process. It was literally, like, turning myself inside out and putting down, really instinctively, this sort of landscape either inside or around myself, and just being honest and not being frightened to try things out ‘cause it’s not cool or whatever. It was about my ear receiving a sound, and whether it resonated with me in an honest way. If it did, it went in. And I’m just very cautious and wary of people responding to it in good or bad ways. Hearing what other people think, and all that kind of stuff, it doesn’t help me to write my music. Other peoples’ opinions actually hinder me. There are obviously special people – other musicians and artists and friends – who of course I’ll listen to, as I don’t want to be seen as a control freak. But I think I’m quite protective… it’s a very personal record.”

That it is, and obviously so: even if you pay little attention to the lyrics, words that flit between the realms of fantasy and reality, the arrangements are that sort of luscious, the kind that causes your heart to rise up to the back of your throat and your lungs to close, trapping a single breath for a song’s duration. When her emotions are laid naked through literal lyrics, Khan’s affecting potency is remarkable; it leaves the listener shattered, both metaphysically and like a mirror fallen from a wall, each sliver of glass reflecting Khan’s experiences at her audience and allowing them to recall their own similar misadventures.

When she allows her sentiments to be consumed by artistic license, though, Khan’s effectiveness at conveying a particular mood or emotion isn’t stunted at all. “I go through millions of obsessions,” she says, before elaborating on the thematic thinking behind forthcoming single ‘Trophy’, a song about Khan cherishing her own abilities and not allowing them to be cheapened.

“At the time someone had really pissed me off – some promoter or something – and he was really sexist and really smarmy. He made me feel really ill, so it was like ‘This is my trophy, I’m protecting it, so fuck off’. Y’know, but I don’t want to be singing, like, ‘Don’t touch my heart… it’s soooo precious to me…’ or whatever. So I’m imagining this beautiful, precious thing – the trophy – and the landscape around it. At the time I might’ve been into queens and jesters, and lions and, y’know, this regal thing, so maybe I was attracted to that. So then you get these themes, and a story evolves – so this person has a trophy, and these people are trying to take it off them, and the creatures of mercy are swirling around the sky and they’re going to come and help you.


“There are a lot of people who use storytelling as a guide, and… I do want to keep some stuff back for myself, so it is a way of distancing in some ways, but it is also another way of getting right into something while not feeling too self-conscious. If you get into the idea of… like, the Bible is very black and white – the good guy and the bad guy – and it encompasses everything in that, so you’re making it less from your small perspective. It’s not taking on different personas, but really delving into a concentrated form of a feeling or something… yeah.”

If all that sounds a little too fairytale for you, persevere: any kookiness, or quirkiness, that Khan exhibits in interviews and while mesmerising from a stage is balanced by her extraordinary ear for what is and what isn’t compositionally stirring. There’s little on Fur And Gold that doesn’t leave the listener’s insides upturned and uncomfortable, in a good way; there’s little that doesn’t lift back-of-neck hairs from their slumber, that doesn’t send bioelectric shockwaves of tingling brilliance from brain to fingertips. It’s an event album, a debut that should provide the catalyst for Khan’s ascent to the stature of the aforementioned artists. If the stars don’t seem to align of their own accord to spell ‘Bat For Lashes’ on September 11, then your telescope’s clearly a lens shy of maximum efficiency.

That said, Khan says she’s sure she can top the Fur And Gold material. “I know, when I listen to the album, that I can do better,” she says, face absolutely masked in matter-of-fact attitude. “Well, I hope that I can do better – that’s what it is, that I hope I can, because I don’t know what’s going to happen next. I’ve written some new songs, and the songwriting is better I think, in terms of structure. I’ve been listening to Neil Young and Fleetwood Mac, y’know, classic songwriters. I want to get better at songwriting, but perhaps the charm of this album is that the songwriting is quite eccentric, or something.”

Khan’s point’s a fair one: for all the electrifying moments across Fur And Gold’s eleven songs, it’s an album that isn’t exactly bubbling with coherency. It is eccentric. The stark piano ballad ‘Sad Eyes’, written while Khan was both heartbroken and hungover, rubs shoulders with the more lyrically fantastical ‘The Wizard’; elsewhere, the breathy dance-beats of ‘Sarah’ precede the album’s seemingly suicide-inspired closer ‘I Saw A Light’. “There’s a definite eclectic mixture,” says Khan. Of course, though, neither Bush nor Björk are known for by-numbers albums of sound-alike songs, repeated a dozen times ‘til forty-five minutes are up. Khan’s appreciative of the comparisons she’s received thus far – who wouldn’t be? – but she’s wary of being spoken of in the same breath as such high-profile artists.

---
"Part of me wants to go and work, and live, in some haunted house in New Orleans for two months"
---

“I don’t want to pigeonhole myself into the same kind of sound [as those artists], as we’re different people and we’ve had different experiences and have different things to say, but in terms of their strengths and the things they stand for – being unique and not following trends – then of course that’s an honourable thing to be compared to, and I’m quite happy about that. I don’t want to be some mediocre whatever, but at the same time I’m hoping that I can progress further still and just go into my own thing, stronger and stronger, and not get diluted or get frightened and then have to sound the same as other people, ‘cause that’s frightening to me. I hope that I get enough confidence and become the sort of artist that can get into their own area.”

Don’t be surprised if future reviews suggest that Khan’s already residing in an area that’s entirely hers, one that’s truly unique in the midst of a crowded female singer-songwriter market. Also don’t be taken aback if her next album’s creative process is more adventurous than that of Fur And Gold, which was recorded in a forest in the pouring rain (listen close to the beginning of ‘Horse And I’), and at an aging mansion with Lift To Experience’s Josh T Pearson (who guests on three songs, including ‘Trophy’).

“I think it’s going to be better next time, because I’ve proven that I can do it all off my own back, and that the label leaving me to it has worked, so next time, hopefully, I’ll have even more freedom. Part of me wants to go and work, and live, in some haunted house in New Orleans for two months, to do the writing. I want to be more experimental with the recording next time – I’d really like to work with, like, eight double-bass players, and just get fat sub-bass out of horns or something crazy. Don’t tell anyone that. The double-bass thing – it’s my secret. Don’t tell them. If you tell them, it won’t be a surprise!”

Well, were you not already advised to not act surprised? In the meantime, be sure to assist musicians struggling with equipment on the Victoria Line. You never know what’s swirling in the skies overhead, just about ready to swoop and punish you for your failing of a gentlemanly deed.

Bat For Lashes’ Fur And Gold is out now. Natasha Khan, and band, play a handful of dates in September – click here for more information.