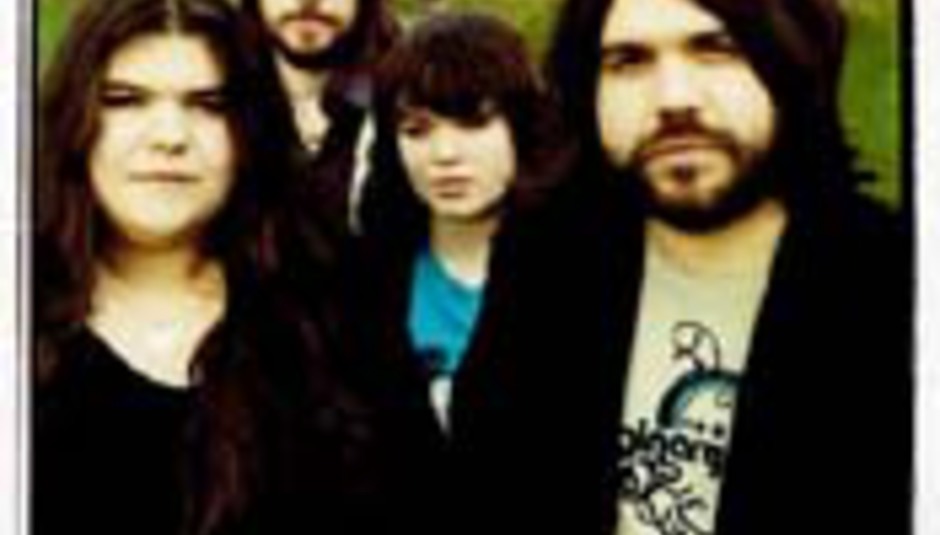 An Afternoon In The Sun

An Afternoon In The Sun

by Ross Bennett November 23rd, 2004
It’s great to meet people that smile. However, meeting a band that smile – Well that’s as rare as spontaneous human combustion – but thankfully just as warming. Refuting the tired, get up on stage, head down, play then leave as quickly as possible attitude, these guys have twenty four-seven smiles that are as infectious as the lilting sounds they create so well as four-piece The Magic Numbers.

From Trinidad to London, via New York, guitarist and lead vocalist Romeo Stodart has always written songs. Now with the low-end expertise of sister Michelle on bass and BV’s, friend Sean playing the drums and his sister Angela adding more harmonies and other sparkly noises, Romeo’s songs are no longer isolated acoustic numbers. With his family and closest friends around him, he sings a catalogue of tunes that are delivered in glorious slow breath and harmony – a sound and songbook, which at the moment, cannot be touched by their competitors and contemporaries. With such a vast selection of songs all of soaringly high quality, it’s a surprise their grins ever fall away.

Sean: “You look out at a gig and all these people are having a cool time – how can you not smile? Other bands must enjoy themselves, but I suppose they’re just more self-conscious about showing it” and the reason behind the crowds reaction is obvious - “Yeah. We’ve got the songs – songs that work”

If you’re lucky enough to witness one of their stirring live performances, then you’ll also notice the instant reaction from their audience. As the band testifies, it’s fascinating to watch:

R: We were playing Bush Hall (supporting The Webb Brothers) and some parts of the songs are deathly quiet. I mean I could actually hear my feet tapping on the stage, and there’s four hundred people who are just standing, listening – they’re with you in the moment – it’s something very special” This something special seems to happen every time the band play and it’s not just the paying punters that have been won over by their tunes. “We always wanted to sign with one of two labels – Rough Trade or Heavenly – they seem to be the ones that truly believe in the music they put out” Being offered a deal by two of the most renowned independents in existence is easier said than done…or so you would think. “We were about to go onstage at The Water Rats and someone told us that Geoff Travis (Rough Trade) and Jeff Barrett (Heavenly) were both there waiting in the crowd to see us play!”

If you’re looking for the inspiration behind the sound that made Jeff Barrett (things went in Heavenlys’ favour) fall in love with The ‘Numbers sound, then look no further than doe-eyed and classically bearded Romeo – affectionately referred to as Santa Claus by the rest of the band:

“Leonard Cohen, Johnny Cash, Joni Mitchell, Nick Drake are on one side of our inspiration and then on the other are bands like The Beach Boys, The Ronettes, The Band…it’s a mix of singer/songwriter records and the guys with the harmonies” They obviously keep very good company, but what about 2004 – who turns this band on?

“We love The Zutons” exclaims Angela “And The Concretes of course” affirms Sean. “We’re really into people who are doing their own thing, something different. Some bands just come across as tiresome. Keane – I mean come on, they could try a bit harder” Although their music conjures images of dusty tracks and rustling cornfields, the sound is still consistently fresh. They look different and most importantly this band have got the songs. ‘Love Is A Game’, ‘Wheels On Fire’, and sublime first single ‘Hymn For Her’ are but a few of the tales of heartbreak and happiness that make this band such a pleasure to hear play. Michelle: “We didn’t realise how important the family connections were until we started gigging regularly. If one person is feeling down we can all tell straightaway without even thinking. Every gig I get shivers down my spine. We feed off each other - it feels amazing and makes this band the band we always wanted it to be” The chemistry between the siblings is so vividly alive onstage that transferring the sound onto record must be something of a daunting prospect. “That’s why we’re heading to Sweden. We’re so used to rehearsing in Romeo’s front room, all squashed together, that a huge studio complex always seems too clinical – a remote studio in Sweden with a few cows in the field outside sounds perfect!”

Having toured around the country with the likes of The Webb Brothers, Ed Harcourt and their friends The Concretes; put their harmonies to wondrous use on the new Chemical Brothers LP and now with their first single tucked under their belts, The Magic Numbers seem to be picking up fans by the chord change. This is just the beginning something truly out of the ordinary – a band whose songs speak volumes in the simplest of ways. Hitch a ride with The Magic Numbers – the sounds you've been waiting for are finally here.

R: “This girl came up to me after a gig and said, 'I’ve been really depressed lately and seeing and listening to you play tonight - well, it makes me want to feel again'”

You better believe it.