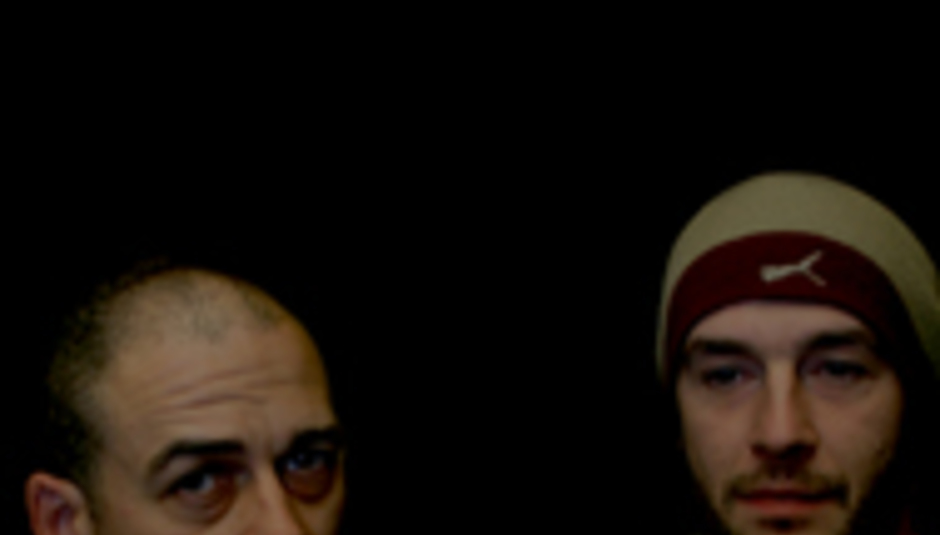 ATP's The Nightmare Before Christmas Preview #1: The Chapman Brothers

ATP's The Nightmare Before Christmas Preview #1: The Chapman Brothers

by Mike Diver November 18th, 2004
In the first of two ATP previews, DiS meets the Chapman Brothers, curators of December's festival. Will we receive a warm welcome, or burn in Hell? Read on...

“They wanted Gareth Gates and Ric Waller. I’m being serious.”

All Tomorrow’s Parties’ Barry Hogan isn’t convincing me. To his right, next month’s ATP curators Jake and Dinos Chapman look at each other, muttering something about having sign language interpreters performing along with the aforementioned Pop Idol wanksacks. Still, I’m not convinced.

Rewind some quarter of an hour or so. DiS has just arrived at The Golden Heart public house, all of a stone’s throw away from the curry-lover’s paradise of Brick Lane. Having not eaten since 8 o’clock this morning, we’re pretty famished (okay, I say ‘we’, I mean ‘me’ – for all I know DiS photographer Sonia has met me fresh from munching on a large pasty, or something), and the smell is like a red rag to a bull. Quickly, inside.

We’re greeted by Barry and two men who could be anything, professionally, judging by their dress – teachers on a day off, businessmen on a dress-down Friday, househusbands taking five at their local boozer. The point is this: Jake and Dinos, the latter suffering a hangover, are not the ghouls that I, with only meagre knowledge of contemporary art, half expected. They’re courteous, even after hours of ATP-related interrogation prior to DiS’s arrival, and smile like children on Christmas morning, eyes sparkling with the expectation of what’s about to go down only weeks from now: The Nightmare Before Christmas. This is where it starts. Indeed, this might just be where the very seeds of the project were sown.

“Helen, my partner in ATP, suggested it,” says Barry. “We’re friends with Jake and Dinos, so I asked them over a few beers and they said yes.”

“He was probably looking for another beer,” says Dinos.

“Yeah. I said, ‘Buy me a beer and I’ll let you curate ATP.’ Unfortunately, they took me up on it.”

The brothers have never been to the festival, held as always at Cambers Sand’s Pontins, but their enthusiasm shines through. They’re keen to stress, though, that the Nightmare event is a collaborative effort, with both the brothers and Barry and co. involved in the band selection process.

“Barry put a letter through our door saying, ‘These are the bands that are playing, say yes’,” says Dinos.

“It’s been collaborative,” says Jake. “There were bands that we approached but they had prior commitments, and ideas changed over time. It was always collaborative, from the very outset – we never thought we were going to be in a presiding position. Also, Barry has experience of doing this; he has a view on what three days of music should be like.”

“There are a lot of bands that appear, en route, because they’re touring around that time,” continues Barry. “That happens with all the ATPs. The only one it didn’t happen with was Autechre. They were, er… how do I put this?”

“No! But they were precise about it – anything that was suggested, they were like, ‘No. We just want it this way’.”

Knowing that the selection process was a collaborative effort, it’s not surprising that some of the acts are new to the brothers. Dinos was once quoted in Time Out as saying “The work (their work) is recognisable for its attitude, not its form.” I wonder if this applies to a number of the bands lined up to play the event – Lightning Bolt, Wolf Eyes and Growing, for example?

“That wasn’t me. I wouldn’t say something like that.” replies Dinos. For a second I doubt my research. Then I remember the guy’s got a stinking hangover, and that said interview was some years ago. “I would be the one saying I was scared shitless by a fat pigeon or something, after first seeing The Birds.”

Jake counters: “No, you were quoted as saying, ‘Humans are obsolete; fibreglass is much better’. We just had a massive argument with another journalist about beauty and stuff…”

“It was really weird,” continues Jake. “He was trying to say that a lot of the bands we’d picked had an attitude, and the attitude was that they just wanted bourgeois people to say they sounded nice, when they sounded like shit.”

“You said you weren’t going to say that word,” exclaims Dinos.

Barry sets off on a tangent of his own.

“He was saying that The Jesus and Mary Chain sound like The Ramones and The Beach Boys. I’m like, not on any records I’ve got. I think he left his sense of humour at home. It was [name removed so we don’t get our asses in any trouble] from The Independent. He was a cunt.”

The event’s name, quite obviously, stems from Tim Burton’s animated film of the same name. Barry used to see the director, with "tramp"-like Helena Bonham-Carter, when he lived in Belsize Park, but won’t be sending him an invitation.

“After what he did to Planet Of The Apes? Fuck that.”

With the brothers’ enthusiasm obvious, a hangover aside, one question remains: will the Chapmans indulge in any music-related ventures in the future?

“That depends on whether or not we get chased into the sea,” replies Dinos. “That will probably happen.”

“You can’t really predict these things,” continues Jake. “We’ve answered this question a few times – doing this isn’t really a departure for us, because we don’t see a division between art and music. It’s quite weird being in the position of being the curators of a music event, and having people ask you, ‘But what do you know about music?’ Well, we know as much as anyone else. If you curate an art exhibition, it’ll only ever be contingent on your opinion; you can’t make an art exhibition that’s perfect.

“I think it’s the collaboration between us and Barry that’s important – it’s not about us. The reason that we [brothers] started working together is because we wanted to make it about the work, rather than the single artist. By working as a pair, it confuses that trajectory, that line that begins with the single artist as the central ego. What’s nice about this is that it’s collaboration on a big scale. And it’s not just about us.”

All Tomorrow’s Parties’ The Nightmare Before Christmas takes place at Pontins, Camber Sands between the 3rd and 5th of December. Bands confirmed to play include Shellac, Lightning Bolt, Throbbing Gristle, Liars, Comets On Fire, Wolf Eyes, Mike Watt, Hood, Destroy All Monsters, Mercury Rev, …Trail Of Dead, Growing, Aphex Twin and many more. Check ATP’s website for all the information you could ever want, and up-to-the-minute news. Next week, DiS’s second preview – the lost interviews from this year’s Director’s Cut event, featuring Converge, Part Chimp, Cex and Dead Meadow – will be online.