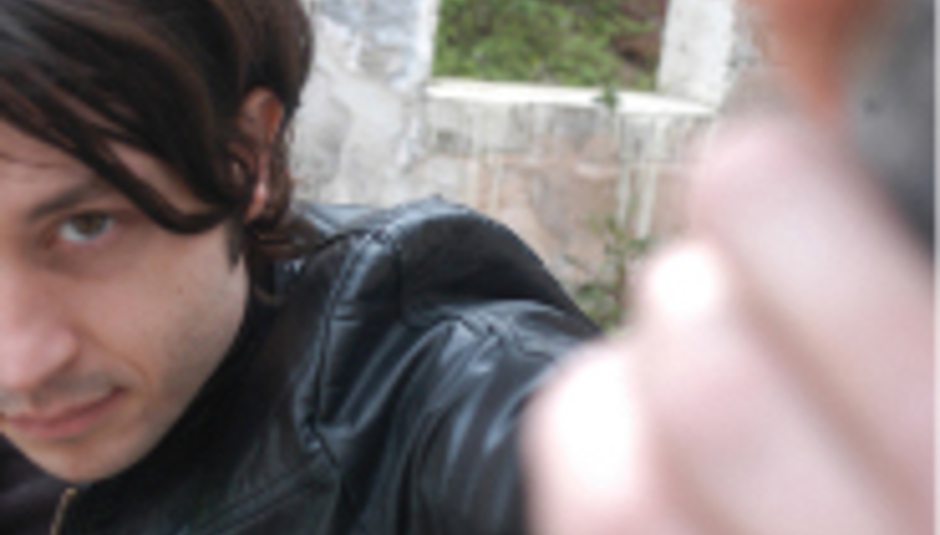 by Jane Oriel October 17th, 2004
'The Sweetest Ache', the long overdue debut album from Christopher Rees, finally sees the light of day this week. The much travelled musician, who has gigged the length and breadth of America, worked in Haiti with Voodoo drummers, was hand picked by the former Velvet Underground's moody Welsh pianist John Cale as support act, and recently played the Houses of Parliament, whetted appetites in 2001 with the EP 'Kiss Me, Kill Me'. DiS spent a cosy afternoon at the Welshman's home finding out more.

Christopher Rees sits cross-legged, cradling a Dictaphone. Surrounded by hundreds of CDs and the accoutrements of a home studio, he repeatedly plays a sound-clip of a cute Californian tot who's saying "Can you hear my music playing? Can you understand the words?"

"She was just tinkering around on her Fisher Price piano when I pressed play. I didn't know what she was going to say but the thing is, her music didn't have any words. I'm going to have to loop this and put it in a song one day." Then, on reflection, "I'll probably wear the tape out before I can get to use it."

'The Sweetest Ache' is the culmination of two-and a half years writing, and laboriously recording, this mammoth piece of musical vision. As anyone who has witnessed Rees and his band playing live will know, we are not anticipating faint, cowardly little whispered efforts. He, and his several musicians, have produced a piece of work where the crash barriers to scope, height and breadth are always over the horizon and just out of sight.

But music was not the first career choice for a football mad kid who made his entrance to the world in a Llanelli house named 'Highbury'.

"I was completely fanatical about sport as a child and, believe it or not, I went to college to study sport and human movement."

At that same time, Rees discovered an alternate education in his elder brother's record collection, which lead to a first guitar and a rewritten curriculum.

"I bought a guitar when I was eighteen and had been learning for about six months, when I saw John Cale play at the Brangwyn Hall, Swansea, and then everything changed. I sat in the front row and was completely blown away by the power of one man and one instrument. Most of my time at college after that were spent learning to play the guitar, and writing songs rather than anything else and after graduating, I travelled America for a couple of summers where I started playing coffee houses."

That sounds a very daunting way to launch a new career.

"Playing in the US where nobody knew who I was gave me a lot of confidence, I guess. In a lot of ways it was easier, because there were no expectations to be dealt with."

Spending so much time there must have been quite an eye opener?

"It was. Travelling America changed me an awful lot. It made me take stock of who I was and what I wanted to do with my life, and in many ways, opened my mind up to the bigger picture outside of Wales."

On coming home, Rees continued to play solo for four years but became increasingly aware that the ambitions he held for his music were demanding fuller arrangements. Over time, the scope of his band expanded to now include cello, violin, double bass and piano, as well as the more usual rock band elements.

It must be quite an organisational feat to get your full intentions over to a seven-strong band?

"I guess I have to be a bit assertive in some ways when it comes to arranging parts because I need to take responsibility for the whole sound, as it's going out under my name, but there is still plenty of scope for everyone's self expression. I like things to develop organically. It is very different to the way Dave works because he prefers to score his parts."

Dave Stapleton is Rees' pianist, as well as business partner in Red Eye Music, a company that specialises in original film and animation soundtracks. The new venture was launched last spring with a seminal, all guns blazing, live multimedia event at Chapter Arts Centre, Cardiff (read the review here).

"Dave is a very good improviser, as well as being a technically and theoretically brilliant musician, but I approach things in a far more basic and intuitive manner. That's probably the reason we work so well together."

Former single 'Kiss Me Kill Me', is found amongst the album's tracklisting. It overflows with life, death and passion but was it inspired by a real life experience?

"Er, kind of..." Rees replies, with an unusual reticence.

"Um, I suppose it is, in a sense. I don't really know how to describe that song. Maybe as how one kiss can turn your world around for better or worse, like a kiss of death or a kiss of life? It's about love, I guess."

Sometimes, your lyrics seem to suggest a desire to open your heart to certain people although you'd rather not do so to their faces?

"Hmmm. It's true. I find it far easier to express what I'm thinking to a piece of paper than to someone close. Or maybe it's just easier to articulate those kinds of feelings in that way. Although some of my songs are really naked and as open hearted as you could possibly imagine them being, I do still try to keep back a little something for myself."

A highly prolific writer, Rees has already recorded his second album, 'Alone On A Mountain Top (The Ty Bach Twt Sessions)', which in contrast to the laboured creation of his current release, was completed in six short days this summer, all alone in a remote cottage on the edge of a Welsh mountain.

"In a sense, this came about through necessity because I had a big batch of songs that were more blues and country orientated and didn't demand the full band, with the strings and everything else with it. Making that album was the happiest I've been in a long time. Just tucked away in a cottage on my own, up a mountain with just a couple of horses in the field next door for company. I was in my element," he effuses, eyes bright with enthusiasm.

"In many ways, it saved my sanity in that it helped me to look beyond this first album and realise that it isn't the be-all and end-all to the career I hope to establish. I guess it made me realise why I started writing music to begin with. It's because of the joy of creating something out of absolutely nothing."

"It's true that I am obsessed by music, and I've been in it to my peril many times," Rees confesses. "It's kept me awake at night. And it gets me up again in the morning," he laughs. "But if I didn't write songs, I think I really would have gone insane by now. It's one side of me that I just have to feed."