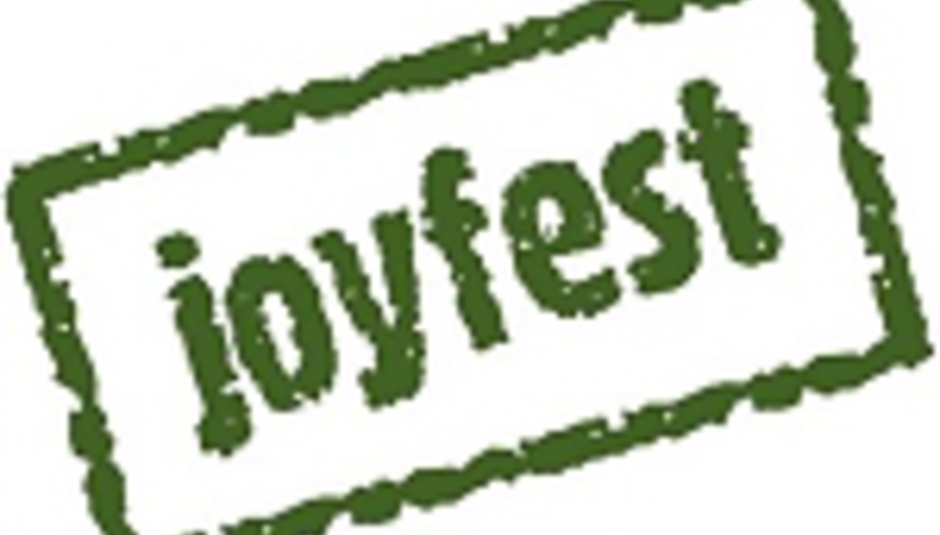 And so on a sweltering Saturday afternoon, DiS ambles its way to Hackney for this year's Joyfest. The line-up is very impressive - in fact most of the new (ish) bands from London/and elsewhere seem to be here, so expectations are duly high. I’ve never been to the Hackney Ocean before. Having spent the best part of two days within this conference/leisure centre, I never intend on returning. It is a soulless, hollow space of nothingness and even though the DiS collective forget to bring their speedos we still spend the first five minutes convinced we can find the entrance to the swimming pool. Thankfully, our search is interrupted by the sounds of competition winners and second stage openers, October All Over.

As the opening band to this weekend of noise, October All Over are suitably loud - falling in line behind the Sonic Youth barricade of overloaded guitars and riff upon riff of screamed, twisted mess. It’s very satisfying indeed, and a pleasing start to the weekend. Thumbs are most definitely up. After a quick walk up the stairs, past the gym (not really) and into the larger of the two rooms, we find Dustin’s Bar Mitzvah sitting around on stage getting pissed - the lack of bass amplification causing a fairly lengthy wait. Amp problem duly sorted, the band begin to play and almost immediately become one of the worst live bands in recent memory. Of course, every band has a bad gig – from time to time it is to be expected. For DBM this will surely go down as the worst of the worst. After two songs, the guitarist seems to have forgotten the chords...or is it the bassist? Either way they’re both playing completely different changes. The crowd’s response is deathly silence and the breaks they take every three minutes must indicate the end of a tune, but I’m fked if heard any songs. I think they ‘re trying to sound like **The Ramones – DiS hopes they had fun. If you’re going to be that bad, at least have something to say. A swift exit via the ridiculously over-priced bar – you can get yourself into debt just standing near the beer taps - gives us a chance to drop in on the minimalist electro blipping of The Vichy Government. The first of many bands this weekend who can be found on the excellently eclectic ‘Rip Off Your Labels’ compilation, yet unfortunately The Vichy Government do not excite. Various keyboard tinkles and drum loops take the backfoot to some softly spoken lyrics about ‘Agendas’ and ‘Mixed Doubles’. Enough is enough. The Long Blondes follow with some chopped down guitars and female vocal drones. It’s all very dark and wandering, the highlight being ‘Autonomy Boy’, but the set tires and one of the guitarists has either decided not to bother playing or has simply forgotten to plug the thing in. Next we go from the spacious minimalist approach to the dirty squalor of We Will Be Pilots who seem to be getting better and better. It’s very noisy, unrelenting and a good early evening wake-up call – they are also possibly the first band of the day that have something resembling a good sound.

As the day wears on it becomes obvious that the Ocean will not be the teaming mass of sweaty music kids I’m sure the organiser/s hoped it might be. High ticket prices and a lack of promotion may have put people off, but costs of course have to be covered. It’s a shame because the weekend is in aid of two great things – Love Music Hate Racism and fresh, new bands. Despite these hiccups, those who have made it down seem to be enjoying Bikini Atoll very much indeed. Minus a bass player, the band still manage to fill the air-condition-less hall with floating melodies and rising tribal rhythms – ‘Desolation Highway’ picking itself out if a halcyon set of dust settling triumphs. When Special Needs take the stage, the audience is still a measly thirty-odd strong. It must be extremely hard for bands to feed off such a sparsely populated hall, but within minutes it’s obvious these five West Londoners are having no problems in drumming up reams of energy and panache. The Glam posturing of suited frontman Zac is offset by a grilling calamity of guitars and sweet backing vocals. Unlike the straightforward ethics of Razorlight, Special Needs have the potential for risk and invention that is missing from many of their capital based contemporaries. With songs such as the catchy ‘Tarts’ and new single ‘Francesca’ receiving more and more radio play, this band seem to be in that happy place called ‘Ascension’. Tonight, although the sound falls apart on a few occasions, Special Needs prove they have the songs – something a few of this afternoon’s performances have been severely lacking.

Downstairs Gin Palace continue to raise the bar and add a touch of class to the mid-point of the evening. Fronted by the singular, strutting Meaghan Wilkie, their angular rock is a driving example that punk can and does exist outside The Libertines' sphere of influence. And how fresh it is to see a band that is confident in its individuality without slipping into bloated arrogance. Onwards and literally upwards, we go from the London based Gin Palace all the way around the globe to the London based Ludes. This band’s slapped about ska-punk ingenuity is always excitingly buoyant yet tonight, like most of the bands on this bill, everything seems a little under cooked. However, disregading the unfortunate teething problems Joyfest seems to be enduring, Ludes songs maintain their course and are packed with enough breaks and changes that the crowd (a little bigger now) is suitably entertained and kept from emptying their wallets into the Ocean (sorry, couldn't resist).

As DiS bumbles out of the venue, Neils Children are in full swing and ‘I Hate Models’ sounds as though it’s battering the walls down in their typically grimy fashion. This sort of event isn’t easy to organize by any means, and for a first day, forgetting a few minor quibbles here and there, the folks at Joyzine have run a tight ship. Until tomorrow then…