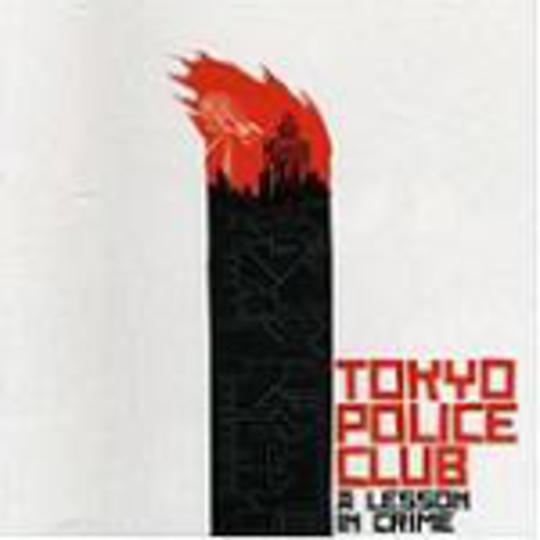 Here’s a conundrum for you pop-pickers. Tokyo Police Club’s A Lesson In Crime has eight songs on it (including a bonus track - ooh!), but only lasts for 18 minutes. There’s no title track, so it’s not a single; it’s too big for an EP and too small for an album. Yet it's nine quid on Amazon. Oh (writer reaches despairingly for press release)... it’s a mini-album. What’s the point in that, then?

Well, despite lasting only slightly longer than a single Joanna Newsom song, it’s to show us the best of Toronto’s (well, Newmarket, Ontario’s) bright new guitar hopes who, presumably, forgot to pay their ‘leccy bills at the studio and had to give up half way or something. So, are they another great Canadian band or just another good one?

Unfortunately, on the evidence here at least, they’re more the latter. A Lesson In Crime starts off with David Monks’ muffled voice begging, “Operator get me the president of the world, this is an emergency”, before tumbling into a wiry Albert Hammond Jr guitar line. The shadow of 2001's NYC heroes doesn't loom as heavily as you'd think, though: the nearest signpost, on songs like ‘Shoulders & Arms’ with its glazed chorus guitars trembling bass, is probably the likes of Editors. It’s probably up to you to decide if that's a good thing.

But, rather than be another Serious Indie Rock Band (goodness knows we've had enough of those recently), Tokyo Police Club prove they've got their tongues well placed in the sides of their wee faces. A Lesson In Crime features not only a song about robots taking over the world in 2009 but also the affably daft single ‘Cheer It On’, which features this chorus:

_“When you're standing near,

When you're standing next to me,

When you take the tunnel,

Arresting you for being in love.” _

And then he shouts the name of the band and everything. It's so silly that, frankly, it's fantastic.

There's lots of potential here but, sadly, it all sounds far too scatty. Each track is stuffed like a battery farm chicken with drums and scratchy guitars. There are only a few occasions, such as the “That's where we first kissed” refrain in ‘Cut Cut Paste’, when they learn to break it up some. It leaves you with an uneasy baleful of layers that grate after a while. Learn to leave something out boys; less is more and that.

But, let's be fair: it's only a 'mini-album', so they've got time yet. So here's a challenge to them to move that seven up to a ten when they get round to making an album that lasts longer than the guitar solo in 'Hotel California': write more ridiculous songs about robots. That'll do. Ta.