A Weekend In The City 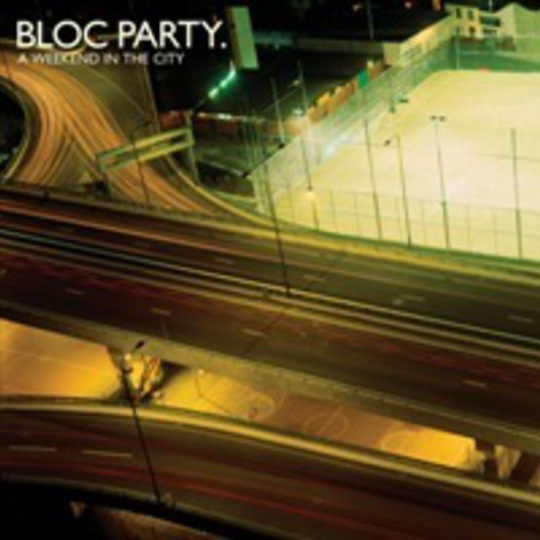 A not-so-secret fact about Bloc Party is that their name before was Union. The act of uniting two or more things, in this case a coming together of four individuals for a common good: the furthering of their musical desires. It was a name of positivity, and this feeling that anything is – was – achievable was carried over and into the band’s still-stunning debut album, Silent Alarm. The Bloc Party boys were a gang: front man Kele Okereke batted away questions about what was informing his lyrics – war, terror, love, fear? – by maintaining a veil of mystery. He answered questions with more questions, provoking debates above the relevance of his words. They were an embodiment of the amazing productivity of the ever-evolving British music scene, a fertile foursome rich in creativity and keen to progress for the country’s common good.

Now, here, the band sounds like they yearn for nothing more but a boat off this island.

A Weekend In The City’s title is no celebration of the plusses of living within the boundaries of a modern metropolis; if anything, it’d make more sense as A Weekend Away From The City, as the primary feeling that oozes from these eleven songs is an urge to escape. It’s an album featuring lyrics shocking in their frankness and honesty; it’s an album that pulls no proverbial punches in its tackling of the evils that haven’t the decency to remain in the shadows in 2007. It’s grey days turning into neon nights turning into drizzled-on dawns without a smile being cracked; it’s every euphoric rush of give-a-fuck felt by every twenty-something in the land distilled and delivered to a record label whose mask never slipped an inch. It’s coolness as ignorance, ignorance as a new cool, the exposing of a nation’s youth culture as nothing more than another cog of the machine driving us all into the bowels of whatever hell awaits.

Take ‘Uniform’, one of many songs on this long-player that could, conceivably, be part of the core syllabus of any sociology course in the UK only a few years from now (see also, in particular: ‘Where Is Home’). It dissects this country’s myriad of pre-teen cliques, each a million strong and spilling out of bedrooms into shopping centre food halls and cinema foyers: “MTV taught me how to sulk and love nothing, and how to grow my hair long”. It’s not rebellion, it’s conformity with an already worn-thin stereotype; it’s disaffection on demand, truancy with no direction nor purpose. The handful of kids on the corner, hoodie’d up, band-tee’d and sipping super-strength cider, they’re phantoms of what was once non-conformity. Okereke observes what each of us has a thousand times before; some of us have even walked the walk, only to bemoan the next generation for their insubordination. Only Okereke sets his words to some truly excellent arrangements.

It’s these that truly set A Weekend In The City apart from its predecessor: Okereke might be Bloc Party’s man out front, a giant smile flashing between sessions of impossible-to-read facial stillness, but Gordon Moakes, Russell Lissack and Matt Tong are a tight and dependable musical unit that’s afforded itself a substantial upgrade. Tong’s percussive skills have never been found wanting, but with production from Jacknife Lee songs like ‘Hunting For Witches’ and lead single ‘The Prayer’ are alive with bio-electrical energy, sizzling with super-charged drumstick logistics. At times the first-timer could be mistaken for thinking they’d inadvertently slipped a Saul Williams record into the stereo, so insistent are some of the beats that scamper around snap-tight guitar strings and Okereke’s acute outlining of each song’s subject matter.

Which brings us slap-thump back to that overwhelming feeling that settles awkwardly in the listener’s stomach come the five-tracks-in mark: A Weekend In The City is dominated by the conveyance of a man’s need to duck out of the glare of day-to-day everything. ‘Song For Clay (Disappear Here)’ may or may not have its roots in the Bret Easton Ellis novel Less Than Zero, but its lyrics can be interpreted in many a fashion. How can the song’s – the album’s – opening lines not be digested as an expression of a soul’s search for something more, most likely elsewhere: “I am trying to be heroic, in an age of modernity … But in my heart I am lukewarm, nothing really touches me.”

Whether we’re privy to Okereke’s personal disdain throughout, or that of a semi-fictional individual based upon the experiences of the band’s four constituent members, is rarely clear. ‘Song For Clay’ continues: “How we long for corruption in these golden years”, for something, anything, to upset the balance; to shift the power, to dislodge the complacency and habits of career’s lifespan. And just like that, we’re presented with it: a song apparently all about the pressures threatening to rupture our civil society.

‘Hunting For Witches’ is A Weekend In The City’s zenith so far as discussion points go – forget anything you’ve read about homosexual love songs, as a man’s expression of adoration is as sweetly affecting when directed at a member of the same sex as it is when sent fluttering to a woman’s heart, because this song’s stream-of-consciousness listing and loathing of the nation’s terror-makers is startling in its earnestness and emotional impact. “Fear will keep us all in place,” worries Okereke, shortly after chastising a certain daily tabloid for perpetually saying that “the enemy’s among us, taking our women and taking our jobs”. The solution: to go hunting for witches, to find those not-at-all responsible for, for example, “(the explosion) on the 30 bus”.

Sequencing is an essential ingredient of A Weekend In The City’s appeal: the flow of one song to the next is unmatched by any other release that’s passed these ears in 2007. Certain transitions are of a complimentary nature – the maintenance of tempo and mood from ‘Kreuzberg’ _to _‘I Still Remember’ for example – but those that jar are far more interesting. ‘Waiting For The 7.18’, an exercise in daydream escapism, clashes stylistically and lyrically against the oppressive ‘The Prayer’; the former ends with birdsong, Okereke seemingly managing to “go to Brighton on the weekend” (a line that won’t mean a great deal to non-Londoners, but that everyone within the city’s limits can relate to), only for the album’s airwave-riding curtain-raiser to open with drum blasts like gunshots. A state of serenity is shattered immediately – the desire for abandonment of the rigours that surround the week’s existence burst like a balloon and all parties involved are sent spiralling back to dim and dingy basements. Earlier Okereke states that “East London is a vampire, it sucks the joy right out of me”, and ‘The Prayer’ is a vivid telling of similar experiences, as well as a neat critique of (other?) bands’ need for ego-stroking.

The album’s second half is a calmer, steadier affair than the opening salvos focused upon above, and it’s characterised by a lyrical nostalgia for simpler times. Childhood and teenage love are themes explored, and realisations are reached: “I have realised, at 25, that something must change”. It’s almost as if A Weekend In The City is a tale told chronologically, in an entirely linear style: the doom and gloom of the record’s first four songs (‘Waiting For The 7.18’ may express a need for change, but no definite result is relayed) lifts and the album’s overall atmosphere lightens. Simultaneously, the battering-ram percussion dies down and songs allow their hooks to broaden and bathe in newly located starlight, an optimism previously obscured by personal demons. Some will say that this is a regressive step, and they might have a point –_ ‘I Still Remember’, while lyrically touching and suitably rose-tinted in its recalling of schoolboy memories, is the album’s least interesting song arrangement-wise – but the sunnier disposition evident in _A Weekend In The City’s latter stages serves to provide much-needed balance. Without this light, the epic blackness and gargantuan swathes of miserable self-reflection of the album’s first twenty minutes would consume the listener completely, rendering them unable to draw any positive parallels with their own existence from the experience.

Okereke’s lyrics, too, aren’t consistent; unlike the music about him, though, these deviations, however brief, are an irritation. But the naked honesty prevalent throughout his words does make up for any awkward expressions – perhaps, sometimes, the right words simply couldn’t be found. There’s a vulnerability to Bloc Party present here, chinks in their armour that weren’t readily noticeable on Silent Alarm. Whereas its predecessor revelled in its role as an album at the vanguard of a new school of British rock bands, A Weekend In The City twitches nervously for much of its running time; it’s never wholly confident in itself, and this uncertainty permeates even the heaviest beats and over-the-top solos (there are a couple, and while superfluous they do at least raise a smile). This is the work of a band in a state of evolution: it’s not the album with which Bloc Party will be most-fondly remembered, as that’s yet to come, but it will be seen as a vital step forward for a band that has the potential to become one of this country’s all-time greats. They’ve the technical ability – that was clear two or three years ago – and now they’re beginning to let their hearts into the process as well as their heads.

A Weekend In The City is the aural adaptation, a digital manifestation, of what it’s like to be a twenty-something in Britain, today. It’s dirty, dishevelled, unsure and paranoid; fearful, easily distracted, boisterous and ashamed; reckless, wild, nervous and terrified; graceful, thought-provoking, clumsy and contradictory. And it’s very nearly perfect.