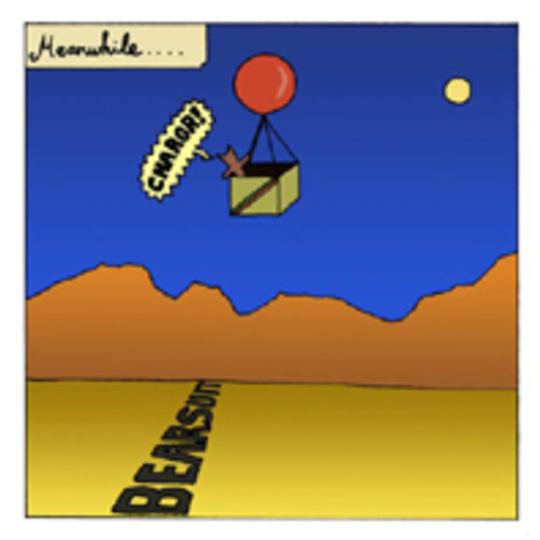 One of the reasons that John Peel’s passing is so devastating is the thought of how much unsigned, uncompromising, tide-resisting music we wont be exposed to in the future. If it weren’t for Peel then not only would I not be sat here writing this in the first place, but I also wouldn’t have heard Bearsuit. That’s a worrying thought indeed.

We should give thanks that we have heard them, mind, as the new seven-incher from the Bears reminds us why we fell in love with them in the first place. Few bands could make something as chaotic as ‘chargr’ simultaneously sound like glorious pop music but by heck, they seem to have done it. Veering seamlessly between squealing riot-grrl/boy clamour and cutesy Belle & Seb-esque retrospection, the ‘Suit engrave their vinyl with tribal drumming, chuck around some steel-capped guitars, whisper “bah bah-baaaaah” vocals and sod off before you’ve remembered how your dancing feet work. Bis eat your heart out, if you haven’t already.

Flip-side ‘…snow’ meanwhile is a gentler affair with understated beeps and bleeps, vocals crooned down the phone and tinkling bells... that is, of course, until the alt.rock guitars and manic drumming crash in, turning the whole shebang into a riot of cherryade, fake blood, brass instruments and blistering pogo action. It’ll be Christmas Number One in our hearts – we reckon Mr Ravenscroft would be proud.