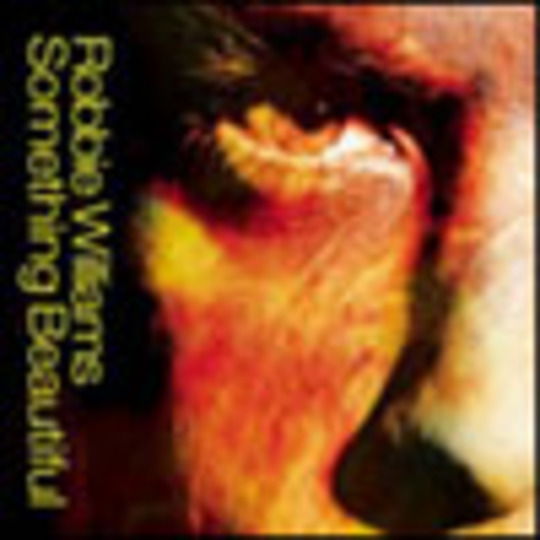 Ahhh Robbie... he who likes the pies, he who commands legions of screaming hormonal girls wherever he goes, he who apparently can’t get through the day without his prescription pills and yet, paradoxically, can still write about hope and love and some kind of beautiful.

(Or maybe he can’t, and it’s actually his non pill-popping ex writing partner who sees and writes about these things…?)

Whatever. No matter who wrote it, fact number one is that Robbie’s finally got over the fixation with his ability (or lack thereof) to rap - and hopefully executed whoever gave him that idea in the first place in painful and torturous ways. Fact number two is that I’m gonna miss the whole Chambers-Williams thang. 'Something Beautiful' doesn’t have the brutal honesty of 'Come Undone', or even the must-be-played-at-family-weddings appeal of 'Angels', but dammit, it sounds good! And not just in the bland/inoffensive-to-the-ears way of most modern mid-tempo pop songs, but with a spark of invention, replacing the usual breezy acoustic strumming with some plinky plonky Elton John-esque piano in the verse. Some bigger glasses and a few more references to feline love and you’ve got something fitting of the Lion King soundtrack.

The raps have been cast aside, but his allusions to the Rat Pack remain in the brassy chorus and big band-style finale. And of course there’s Robbie’s voice, one of the most recognisable around, stamping over the song with slightly less of the now-expected irony, but still that unmistakable twang in his throat and the usual syncopated bobbing of his head in a bird-like style as he twirls his mic. He’s become a British institution and there are few songs that could ruin his elevated status now. Fortunately, as the airwaves will inevitably be saturated with this for weeks, 'Something Beautiful' doesn’t even try to tarnish him.