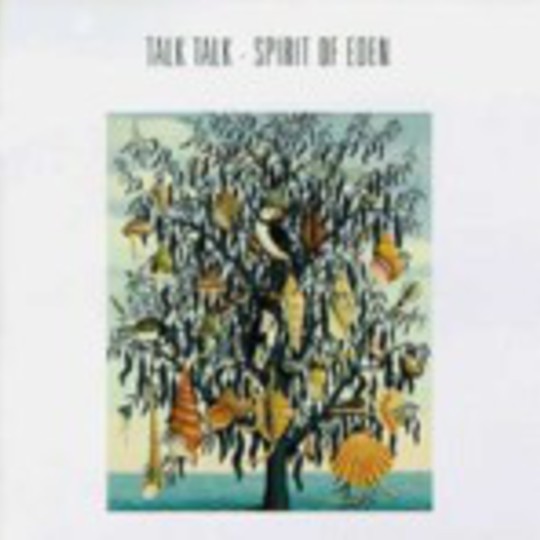 * Talk Talk* don’t really seem to feature in that much musical conversations these days, an almost forgotten '80s rock band, perhaps lumped in many minds along with dinosaurs like Simple Minds, Duran Duran etc, despite No Doubt recently covering their early hit ’It’s My Life’. (Perhaps because No Doubt are hardly bouncing round the nation's conversations these days.) It would be good if history remembered them not just for the hit pop-epics, but also for the much lesser known experimental work which came afterwards, of which 1988s' ’Spirit of Eden’ is perhaps the best example.

The muted Miles Davis-esque solo trumpet intro to 'The Rainbow' sets up the tone for the rest of the record… an ambient soundscape later sliced up with raw distorted guitar. Bluesy piano, clean Fender Twin guitar, sparse tribal drums and filthy raw harmonica bring the song in after two-and-a-half minutes, soon to be joined by Mark Hollis’s voice; imagine Elliott Smith singing over a backdrop of Neil Young and Moe Tucker, but sparser, very much a soundscape rather than a song… even more so than the more instrumental Radiohead stuff and also, since the record isn’t compressed, each inflection of the harmonica cuts into you like it’s being played into your ear. This merges seamlessly into the long ‘Heroin’ style build to the spacious epic chorus of 'Eden', and after two repetitions of the cycle, that dissolves into a loud clean ‘Twin guitar over sparse ambient cymbals before tucking back into the ‘Heroin’ groove again. As before, ’Eden' dissolves into nothing, and from nothing the next track ’Desire’ is formed. Hugely sparse guitar and piano with an almost inaudible shaker forming a backdrop interspersed with the trumpet that we saw at the beginning of the album. The voice arrives with a Hammond underpinning it, subtle and quiet, before kicking with big splashy drums and bass in to another big epic chorus burst, then back to incredibly sparse in a repeat of the cycle before breaking down to a drum and percussion/ raw guitar break that reminds me of the middle section of Jane’s Addiction’s ‘Three Days’ and then raising to a last chorus. Then an actual period of silence before the fourth track ’Inheritance’_ is built upon sparse jazzy ride cymbal, brushy snare and piano. A little build up with the addition of an acoustic and some quiet double bass, then the chorus, again underpinned by keys in the form of a harmonium and some synth effects but also Sax, Oboe and Clarinet, which continue on their own meandering passage when the chorus ends, before the Neal Young guitar starts the cycle again.

’I Believe In You’ has the most conventional beginning, with a clear drum beat but still very, very sparse in the way it is built up slowly out of subtle layers. Mark Hollis’s voice is given so much space to operate that you can hear every nuance, just like the fret squeaks on the guitar. After the first passage of vocals a bass guitar mantra appears, reminiscent of the mantra of Talk Talk’s huge hit ’Life’s What You Make It’. Even this, the most conventional song on the record, always stops short of shooting it’s load, preferring to tease and coax, drawing you in and ending up resembling the long hypnotic grooves of Can far more than it resembles the work of an 80s rock band. After another actual gap of silence, the last song 'Wealth' begins with a naked breathed voice over piano. A quiet organ and a louder syllable, before back to the whisper, adding a double bass and acoustic to the backdrop.

Following the hits of 1986’s ’Colour Of Spring’, Talk Talk were given an open budget and no deadline, and they did something more recently echoed by another EMI band, Radiohead, and went left field. The record company were refused access to the recordings until they were complete, and when they were presented with such a blatantly non-commercial record were pretty shocked. Despite huge critical accolades It didn’t sell well, and would be relatively difficult to get hold of if it had not been digitally remastered in 1997. This is an incredibly beautiful and unique record that has been a bit of a trade secret amongst the muso fraternity. The only reference points I can give you are that if you like Miles Davis’s ‘Kind Of Blue’, Neil Young’s soundtrack to ‘Dead Man’, the way Elliott Smith caressed with his voice or the sounds and the and rawness of ‘Velvet Underground and Nico’, you may well fall deeply in love with this album.