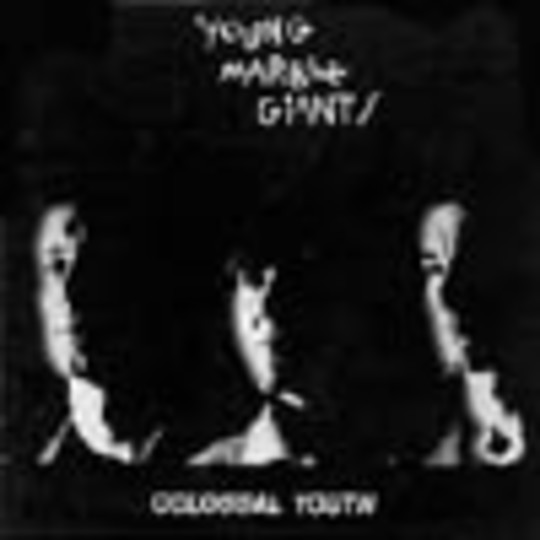 “_Blind as the Fate decrees

I will go on

Teaching myself to be

Side One: the record starts.

A jittery drum pattern, a minimalist guitar. Echoey and distant the sound builds, now added by a dark-soul Joy Division bass and finally Alison Statton’s quiet, pretty, mellifluous voice. The Young Marble Giants slowly, one by one, emerge from the shadows. They arrive without fuss, without fanfare. They calmly sing their songs and then leave. Never to return.

A Welsh three piece, they formed in 1979, they made only one album (this one), a single, an EP and a Peel session and then split, and though their closest contemporaries, Joy Division, were always, and remain, the subject of hagiography, the Young Marble Giants slipped away. Though they are fondly looked upon, even adored, by those who have discovered them, there is a feeling that they have never really had their due, which is a crying shame as there is something genuinely special and unique going on here.

The sound is other-worldly, full of ancient-sounding, music box wheezing; sparten, cheap, Youth Club borrowed electric guitar, plucking and twanging and lonely in a dark space. Alison’s calm voice slowly swims from the gloom like a manta ray weaving it’s way over the ocean floor. Little sparkly lights flicker then disappear, a ghostly fairground organ plays in a dream. A reflective sigh. A sorrowful beauty. It sounds like this.

“_If you think the world is

a clutter of existence

Falling through the air

You could be right, how would I know?

Colossal youth is showing the way to go_

Skeletal and chattering, like Wire playing early Kraftwerk, but then again like something else entirely, or nothing else ever heard, but distantly familiar, like being reminded of a childhood dream, ‘Colossal Youth‘ highlighted a new path for Pop to follow, a path untrodden, through a dark field under a sky laden with shimmering stars. But it was a path down which no-one followed.

Young Marble Giants influenced virtually no one save for, maybe, indie minnows like Pram and Laika who employ a similar, eerie minimalist blooping to their music. Apart from John Peel, they were never played on the radio, they were never on TV, they never appear in any ‘best album of all time’ charts. You might even have a job of tracking down the album to buy - it normally sells for 50p on car boot sales - though there was a ’compilation’ album released to massive indifference a few years ago.

The highest their profile got was when Hole covered ’Credit in the Straight World’ on the ‘Live Through This’ album, a typically ham-fisted effort, Courtney Love’s clumsy fists shattering the songs ice-crystal fragility, but what else is new? Still, I hope they enjoyed the royalties at least

“_Parallel sympathy with you

Take a walk, he's always near

It’s been ten years since my copy of ‘Colossal Youth‘ has been with me, and still I never cease to be moved and charmed by the clarity and purity of Stuart Moxam’s songs, Alison’s hushed, dulcet tones and Philip Moxam’s unfussy bass. Young Marble Giants were as cool and precious as a snowflake and just as perfect and individual and in ‘Colossal Youth, they produced a genuine lost classic, a landmark album that has gone largely unheard and undiscovered. They went as silently as they arrived, slinking back into the dark, forever lost in shadows.

“_Running from a lucky past

As the light goes out on the final day

For the people who never had a say_’