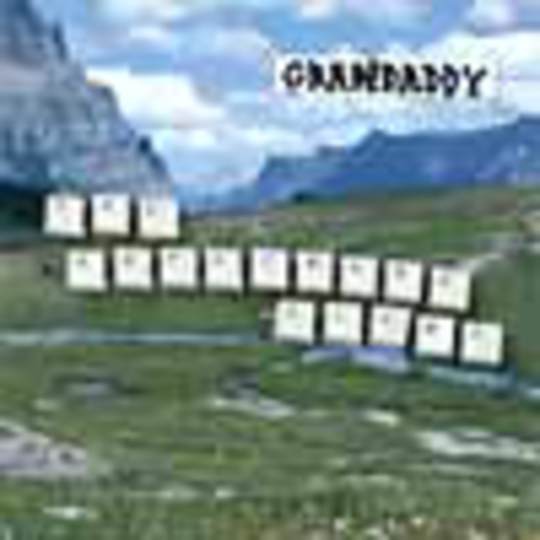 Oh this is just f**king desserts this is. Here's me, spouting on that men dressed as tramps making inoffensive, gentle music are boring and little more than what Pauline from League of Gentlemen would call dole scum when, lo and behold, I hear this bunch of Californians.

OK, so not quite as straight-laced and happy go lucky as Fran Healy and Chris Martin's respective gangs (check out the excessive beardery!), Grandaddy do come across as some sort of mix of Mercury Rev, those weird Blur instrumentals circa Parklife and something else I can't quite put my finger on (dare I compare another band to Wilco?)

Yes yes, I know this came out like 8 months ago or something. I was living in a hole. Dress me in tartan and call me Jock if it ain't lovely though. Mixing strange retro keyboard riffs, rawk guitars, pretty pianos and frontman Jason Lytle's "real indie" Malkmus-esque vocalising and the end product, it seems, is an album that expresses a yearning for a return to the days before Windows PCs and dot com entrepreneurs.

So far, you're likely to have heard a couple of songs by way of Hewlett's Daughter, The Crystal Lake and He's Simple, He's Dumb, He's The Pilot... each of them top notch tunes, so let's start with those.

Recent single The Crystal Lake has the aforementioned retro keyboard riff. Well, it might be done on some flash bit of kit but along with the toe-tapping drum beat, the driving yet tame guitars and the soft vocals it's mellow without being mush and the build-up at the end is very familiar. I thought Radiohead, I thought Everything Must Go by the Manics but no... it's on the tip of my tongue... argh!

Hewlett's Daughter is lovely. Well, she might be... the song is. The chord sequence and twinkly bits give this a bit of a slow dance at the end of the night in a smokey school hall sort of feel and the breathy vocals keep it that way. Now I could kick my feet up and read some pretentiously name-checked existentialist novel to this. Sweet.

Finally, the last of the 11 tracks that've made it to the singles bargain bucket in HMV (it's true, idiots) is He's Simple, He's Dumb, He's The Pilot. Starting out with a badly played keyboard part (you know the harpsichord voice on cheap Casio keyboards? think that...), the song then segues into Mercury Rev territory with acoustic guitars, ambient sounds, more of those techno effects and a nicely paced drumbeat. The lyrics would appear to be something to do with an astronaut on the NASA program who also seems to be the epitome of disgruntled man as he faces the new millennium. Or something. Anyway, it breaks down to a piano bit reminiscent of the bit on the UNKLE album with the sample over the top... I think at the end of Rabbit In Your Headlights? Albeit with more twinkly effects, naturlich.

Another track I'd like to mention is Jed The Humanoid. Starting out slow with some weird noises and more pianos (can you tell I like pianos yet?), it's a gorgeous, almost ballady little number about death. Specifically, the death of a robot somewhat akin to Johnny 5 out of 80s classic Short Circuit. Now, that may sound twee and cute but it seems to allude more to the way we neglect people after initially being totally into them and from one world-weary love muppet to (hopefully) others, I know how that feels.

Anyways, I've been a bit too verbose so far so I'll break it down for you in 30 words:

"Pianos, twinkles, the odd bit of rocking out, gentle vocals, beauty, no Radiohead comparisons, millennial tension, technology themes, relaxing, intelligent, nice, well worth your money so go out and buy it."

There's even a track mentioning Evel Knievel - the man who made breaking your face riding a motorbike cool. Now that's GOT to sell it to you, hey? Hey?