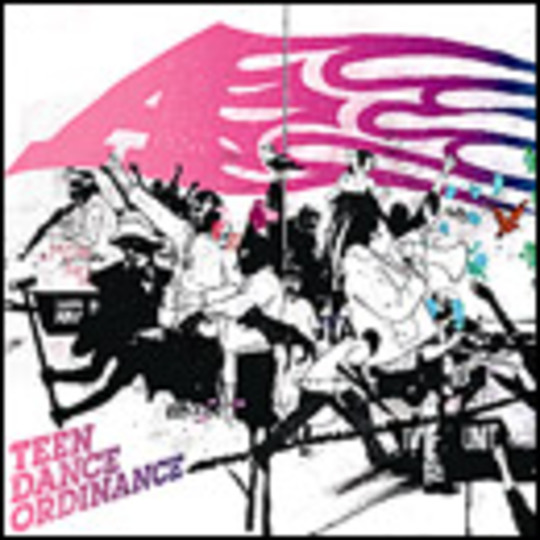 Although it’d be wrong to say that the rot set in for the duration with album-before-this Hi-Fi Serious – said record contained a smattering of bouncy pop-punk floor-fillers ideal for your local pre-teen rock club – it does seem an absolute age since these feet were moved by anything penned by London’s A. The quintet have forever impressed with their electric live presence, but Monkey Kong and its stand-out singles are now nothing more than golden memories penned into the past by the substandard nu-metal histrionics of this, album number four, 'Teen Dance Ordinance'.

Retrospection shouldn’t have a place in the assessment of the here and now, but how can anyone listen to new A material without immediately referencing their past? ‘Summer On The Underground’, ‘Old Folks’, ‘Foghorn’: all great songs to lose yourself to on cheap booze and sugar snacks. Teen Dance Ordinance leads with its singles to date – the decent enough, Deftones-echoing ‘Rush Song’ and its frankly throwaway follow-up ‘Better Off With Him’ (that said, the second single sounds a lot better in an album context than it does as a standalone track) – but neither pack the necessary impact required to keep the listener’s attention through another ten tracks, many of which sound like a tinkered approximation of the openers.

_‘Wake Up’ is a decently pop-rocking romp in the now-familiar Jane’s Addiction vein, but ‘Someone Else’ is simply dire: it’s as if Geddy Lee staggered unsteadily into the wrong rehearsal room following a dizzying Pin The Tail On The Donkey session and wound up singing through gritted teeth with a spotty teenage metal group. The crisp guitars clash nastily with Jason Perry’s very highest-pitched shrieks, the effect on the listener one of immediate action: skip to the next track. Fleeting highlights are relative – there are so many rotten apples here that the fresh fruit smells twice as sweet as it should.

The band’s forever-young exuberance remains even though they’ve now broken the 30 barrier – never do A sound like they’re not having a ball – but never does their enthusiasm rub off on ears bored to (sadly physically impossible) tears. It’s time to face a single, demoralising and quite depressing fact: A are a spent force.

Remember the good times – dancing and singing to songs full of youthful vitality and pop-punk hooks the size of tower blocks – and ignore this quasi-metal death rattle of rehashed riffs and redundant ideas.